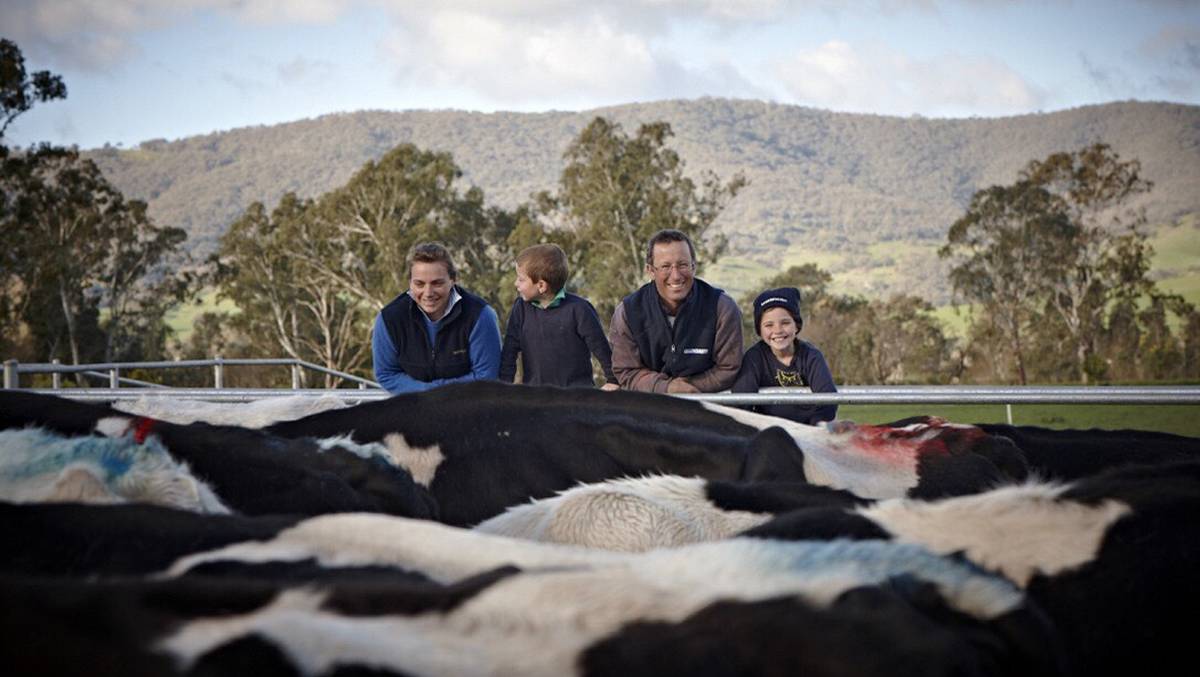 FAMILY FARM: Sarah and Stuart Crosthwaite with their children, Otto and Indi at home on their Kergunyah South, Vic, dairy farm.

A succession plan sowed the seeds to successful growth of a north-eastern Victorian dairy farm.

Returning home 15 years ago as a fifth-generation Kiewa Valley dairy farmer, Stuart Crosthwaite knew he wanted to build something for the future.

"North-east Victoria is one of the best places to set up a dairy farm," he said.

"It's got a reliable climate, it's a little bit extreme but reliable, great access to water, great rainfall, great soils, great community. It's a perfect place to set a dairy business up and that's a pretty good set of ingredients for setting up a co-op."

Fifteen years on and Mr Crosthwaite says the comparison of his Kergunyah South property then and now are "literally chalk and cheese".

Milk production has tripled and the herd has grown from 280 to 470 head, with a move to calving in the spring. There is a new dairy, increased irrigation and a small staff working to an agreed set of values.

It's really highlighted the power in letting the next generation come through. - Stuart Crosthwaite

Perhaps most importantly, Mr Crosthwaite and his wife Sarah have had the freedom to grow their business by embarking on a farm succession plan three or four years after their return to the north east.

"That's probably been the foundation or cornerstone for all of the growth to be honest," he said.

"It's not about me, about Stuart and Sarah coming home to the farm and doing this amazing thing. It's really highlighted the power in letting the next generation come through.

"And it allowed mum and dad to do what they wanted to do. We had the security of knowing how the estate was going to wind up.

"Succession planning has given us the freedom to invest, to take the farm and grow it. And we've seen a tripling of the milk production."

With the question of succession resolved, the Crosthwaites set about investing in pastures and cows, taking the herd from 280 cows to 470 cows on 230ha of milking area across their 600ha farm.

"We built a foundation of milk production so we could support extra debt," he said.

"Then we built a new dairy and moved that to the middle of the farm. That has fuelled further growth."

Half of the property's 230ha milking area is irrigated and the Crosthwaites are now investing in extending that irrigation.

In the past four years they have been growing maize as a feed source for feeding the herd during the winter, supported by the extension of the irrigation structure.

"We are growing the maize for around $200/tonne and on the areas where we grow it we effectively triple production," Mr Crosthwaite said.

Effluent is used to grow the maize that mines the potassium in the effluent in a closed loop.

"In the winter, we've always had fat suppression with our milk because there is a lack of fibre and too much protein in the cows' diet," Mr Crosthwaite said.

"The maize is perfect because it has high fibre and low protein so it complements the existing pasture quite well. The cows are just so much more stable. We've been able to lift butter fat through the winter and it's now contributing to greater fertility in the herd. CULTURE CLUB: Stuart Crosthwaite has adapted the process of building a culture within the new co-op to transforming his own business with values including respect, confidentiality, diligence, teamwork and communication.

"From a herd fertility point of view, in the last mating period we had 13 per cent improvement in calf rate, which is staggering."

Mr Crosthwaite said not only had the maize taken the pressure off the farm's pastures in the winter, but its growth had been phenomenal and showed the region's efficiency of water use.

"We're growing it with three to four megalitres of irrigated water. The rest of it comes from rainfall and soil moisture," he said.

"To grow a crop like that and put it under a plastic cover for silage at $200/tonne with only three to four megalitres of water, that's pretty impressive. Normally you would be using eight to 10 megalitres."

Mr Crosthwaite said there was now about 120ha of corn grown in the Kiewa Valley, supporting the region's dairy farms.

The crop was perfect for the alluvial soils that allowed the plant to put its roots down and tap into the available moisture.

He gave the example where this season's maize crop had been planted on paddocks where new irrigation systems were now being installed. 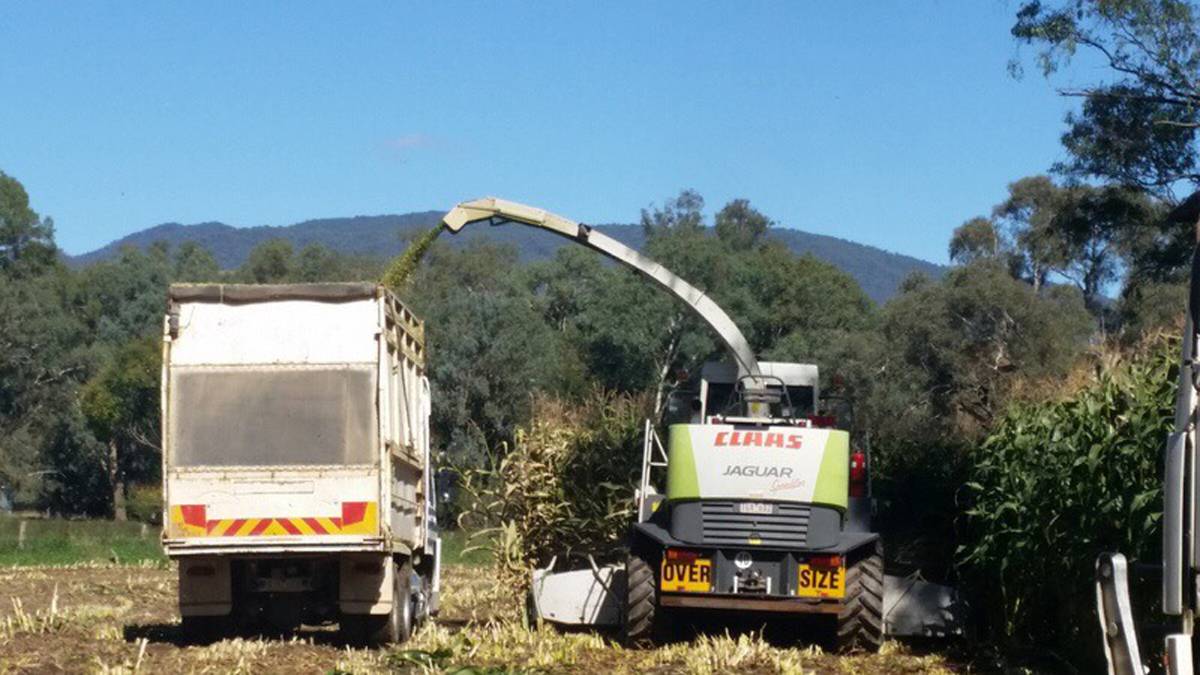 MAIZE SUCCESS: In the past four years they have been growing maize as a feed source for feeding the herd during the winter, supported by the extension of the irrigation structure.

"The irrigation systems won't be up and going for another three or four weeks. We planted it at 100mm down in the soil moisture and in less than seven days it was up. Then we got an inch of rain on it."

The significance of what has been created with the establishment of Mountain Milk is not lost on Mr Crosthwaite, who had initially been running his dairy business and "doing a little bit of stuff in the community".

"The next minute you're running a second business on the side. It's no mean feat to bring five different successful dairy business operators together to create another business operation and agree on a strategic plan, agree on how we are going to make decisions and co-ordinate all that," he said.

"But we've developed a culture around decision making and understanding each other. I'm really impressed. It's really courageous what they have done.

"For Sarah and I, the whole journey of putting co-op together, and I think for most of the other farmers involved, it has been really refreshing being out of the farmer-processor arrangement, having a little bit more control and a little bit more of a say in what happens to our milk and what we get for it, and how we find more value through the co-op.

"I think I'm quite resilient and mentally strong, but I think there's been a mental health element in there. It's been quite therapeutic, getting rid of that noise and not being dictated to."

Mr Crosthwaite said he had adapted the process of building a culture within the new co-op to transforming his own business with values including respect, confidentiality, diligence, teamwork and communication.

"A lot of people would look at values as a bit of fluff but it's pretty powerful stuff," he said.

"I've started doing it here in the farm business and I've let the staff drive it. We've got a set of values, a little bit different to the Mountain Milk ones but there are some similar words in there. It's been really encouraging seeing them grow and take ownership of it.

"Once you have that foundation that we're all agreeing on, then everyone can be held to account.

"It's also a really good piece of evidence that it's not about today, it's about tomorrow. Why would you worry about setting values if you were trying to cash in."