Georgia Sieben and her family's Brindabella Holsteins from Torrumbarry, Vic, swept all before them at the 2020 International Dairy Week youth show on Monday. 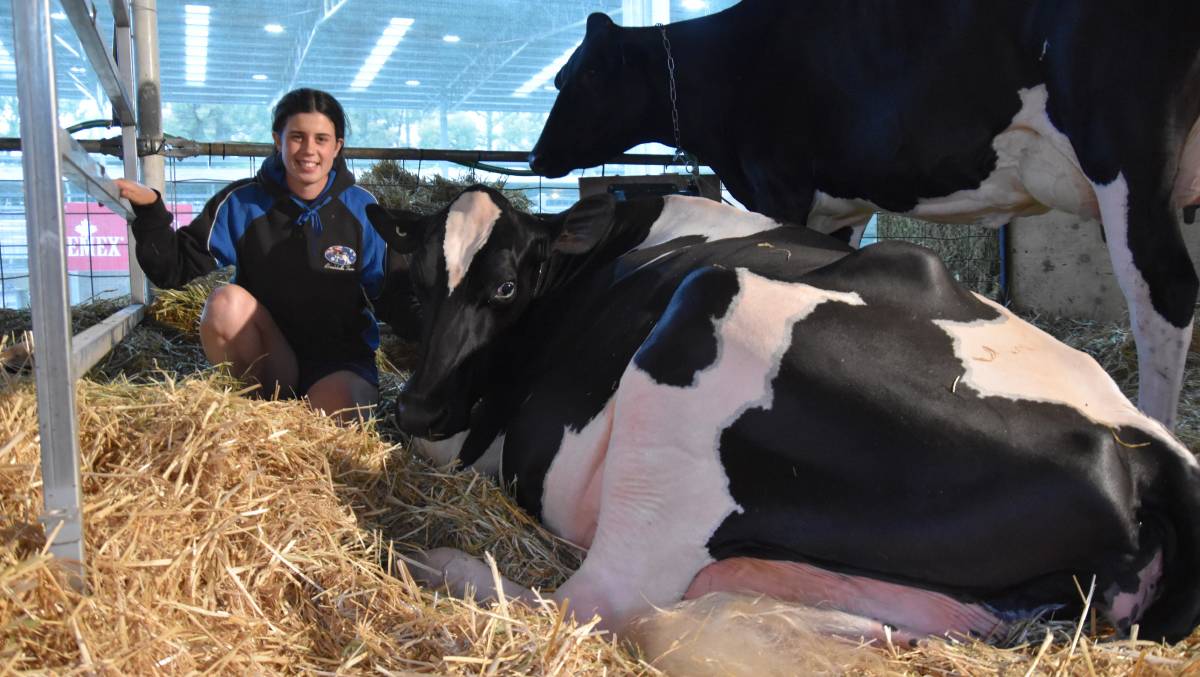 Georgia Sieben and her family's Brindabella Holsteins from Torrumbarry, Vic, swept all before them at the 2020 International Dairy Week youth show on Monday.

Another entry from the stud Brindabella Meridian Connie was named the junior champion heifer - senior leader earlier in the show.

It was a great way to start the year as she heads into Year 12.

She said she was keen to eventually work in the dairy industry and hoped to study veterinary science and then work on a big dairy stud farm somewhere.

Ms Sieben said the family had only decided to show the champion after it had calved in September.

"She was pretty good at the start - she's a sweetheart, she loves love.

"She can be a bit of a pain to work with, but it has been really fun."

The heifer is a Solomon out of a Razor and its dam was also in Brindabella's show team.

The dam was a "nice young cow, but doesn't have the big frame (of its daughter)", Ms Sieben said.

The champion Solomon R Midge was a great cow in the herd.

"She has a lot of grunt about her, so she is first into food - that's pretty much how we won her over, with food," she said.

"She's our type of cow; you will see a lot of cows like her at our farm - big framed, strong front end type cows."

"The heifer out here that was champion today was quite an outstanding heifer and you have to admire her for her size and scale and that beautiful udder and fore rib and the height in the udder," he said.

Ms Sieben said the junior champion was shown for the first time at the Echuca, Vic, show a few months ago, where it had scored an honourable mention.

She was surprised at how well the heifer, which belongs to her brother, performed.

The heifer was a Meredian out of an Alexander.

Mr Barron was also impressed with this heifer.

"I just can't go past the Holstein heifer," he said.

"Just the overall hardness through her top and openness right throughout.

"She has plenty of style and that's what I like to see in my heifers."

The young Jersey, which is to be sold at IDW, impressed Mr Barron with its "size and scale right throughout her back and beautiful high-line rear udder".

Mr Barron said he loved the overall length of the heifer and its top line.

Intermediate Champion Handler 14 to 17 Years of Age on day of show.

Primary Champion Handler 11 to 13 Years of Age on day of show.

Junior Champion Handler 8 to 10 Years of Age on day of show.

IDW director Brian Leslie announced on Monday at the event that there would be a change in the Holstein judge.

Yan Jacobs, from Quebec, Canada, had to withdraw from judging at the last minute due to a serious illness in his family.

Mr Walker, from Canada, is no stranger to the ring at IDW, having previously judged the Holsteins back in the days under the big gum tree, the Jerseys in 2010 and the Youth Show last year.

At the Royal Winter Fair in Toronto, Canada, Mr Walker has judged the Hays Classic - the largest youth show in Canada as well as the Holsteins in 1998, Jerseys in 1999 and in 2017. In Australia he has also judged the Jerseys twice at the Sydney Royal Easter Show.

An owner and the auctioneer at Brubacher Sales, Mr Walker has sold many of the top herds in Canada when they disperse.