A young couple who have returned to dairy farming in the past 18 months took the grand champion Ayrshire award at International Dairy Week on Tuesday. 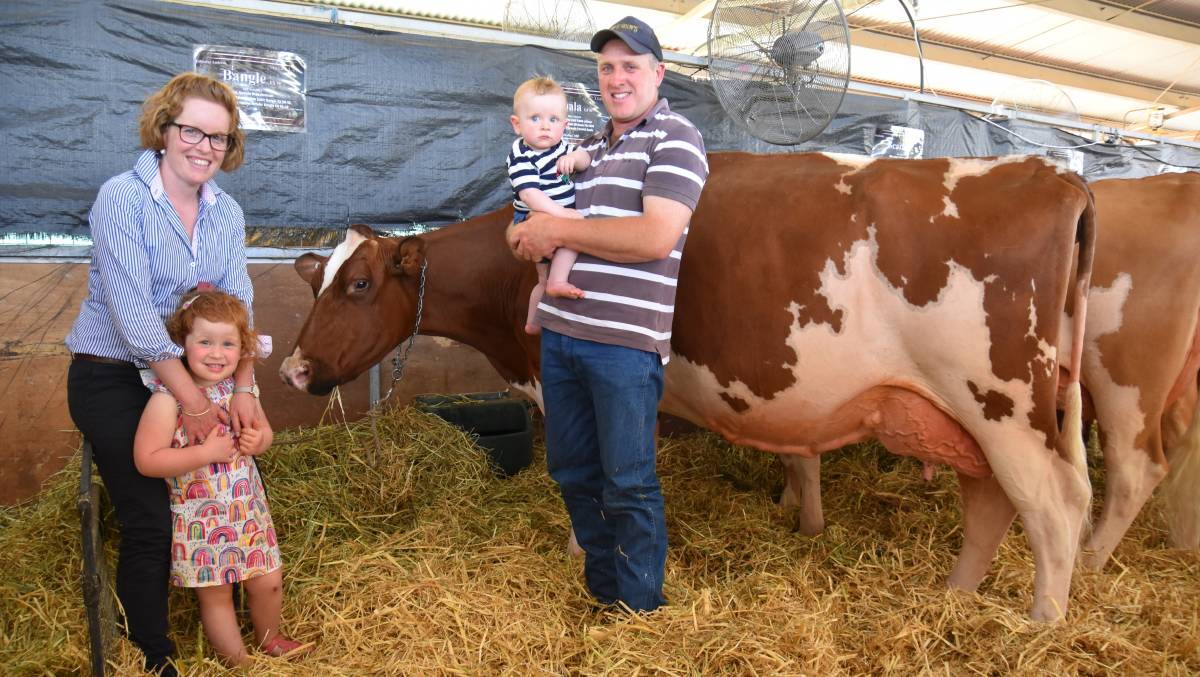 A young couple who have returned to dairy farming in the past 18 months took the grand champion Ayrshire award at International Dairy Week on Tuesday.

Greg and Kim Wilson, Irrewillipe, Vic, have only a few Ayrshires in their herd but are looking to grow that - with Mr Wilson's interest spurred on by his parents' involvement with the breed for many years.

The couple sees a bright future for the industry.

"We are really confident about the dairy industry going forward," Mr Wilson said.

The Ayrshires had a spectacular show as the feature breed with a large exhibition in front of a crowd of more than 100 international visitors, attending IDW as part of the World Ayrshire Conference.

Australian Ayrshires president Scott Braendler, Kalangadoo, SA, said the success of the show was a testament to the hard-working committee who had put the program together for the conference.

"To be able showcase what we have as a breed to all over the world is just an awesome opportunity," he said.

The grand and senior champion and the intermediate champion were bought in October at the dispersal of one of Australia's top Ayrshire herds - the Hillcrest Ayrshire stud of Kevin and Sharon Smith, Borallon, Queensland.

Judge Francois Beaudry, Canada, said all the cows vying for the senior champion showed a lot of true breed character.

"This cow today really represents what the Ayrshire breed is," he said.

"I think she is just perfect."

"It's fine with good texture, good ligament, the teats are in the right place - amazing," he said.

Mr Wilson said the couple bought the champion, along with two other cows, at the Hillcrest dispersal.

"My father saw her grandmother at dairy week - that's the Retake cow - and had raved about her ever since," Mr Wilson said.

"So when the sale came up with the opportunity to buy one of the Bangle family, we took it."

They couple were phone bidders at the sale, which they said was "pretty nerve racking" and they saw the budgets they'd set go out the window.

"As it turns out we are very grateful that we hung in there and bought her because she's been a great cow," Mrs Wilson said.

Mr Wilson said the three cows fitted well into their 1000-cow herd, but the champion stood out.

"We are just really happy with her - she's as milky as a cow you'd see, if nothing else," he said.

Mr Wilson said he had always had a keen interest in the breed.

"I grew up milking Ayrshires not far from where Kim and I farm now," he said.

"My brother and I milked our family herd for a few years together and then we dispersed in 2014 - the 300 Ayrshires that were bred by my mother and father."

Greg and Kim spent a few years out of the industry before taking on a share farming position together.

Their herd comprises mostly Holsteins and some crossbreds.

"We're not breed-specific, the bulk of our herd will be Holsteins but we will have some really good Ayrshires," Mr Wilson said.

"We just like good cows, no matter what colour they are."

The couple have already flushed the cow and have seven eggs from her, which they hope to use to produce a cow that's even better than the champion.

They said the season where they farm had been fantastic.

"It's dry in January, like it should be," Mr Wilson said.

"It was wet enough, late enough and we got some good silage and hay yields.

"We were very fortunate, we can't complain about it.

"We've farmed in northern Victoria and we ended up down there for a reason and it proved why this season."

It had topped the Hillcrest dispersal sale for a new Australian Ayrshire record price of $21,000.

"She was just an awesome looking cow and had the pedigree.

"We'd never spent that sort of money on a cow before.

"It was a once-in-a-lifetime opportunity to go to a sale and be able to buy genetics from a herd of 106 years of breeding and of the quality of something we really wanted to do to move our own farm and our own stud forward."

The cow also offered an outcross pedigree for the Boldview herd.

Mr Braendler said they hoped to get Jumper Lorette 2nd in calf for dairy week next year or would look to flush her if it missed.

"She is only young so she has a good future ahead of her," he said.

Mr Beaudry was impressed with the good size, legs and udders of all the cows vying for the intermediate championship.

'"The intermediate champion is just a real show cow, she's tall, she's fancy, she's up on her legs, she catches your eye," he said.

"This guy has not shown cows for many years and when they did no one could get near them," he said.

"To be not only premier breeder but breeder of the intermediate and grand champion is nothing short of unique."

Mr Dillon said the calf, which was shown in the first class of the day, was an embryo transfer born in July out of a flushing from a cow he bought from Max Hyland's dispersal.

He still had five eggs from that flushing.

The calf was by Rockstar, which Mr Dillon had not used much previously, but he was after something with a really good udder.

"I am extremely happy with how it went," he said.

Mr Dillon is also enjoying the move from northern Victoria to Gippsland.

"It has been a brilliant season," he said.

"To be not feeding silage or hay on Christmas day was great."

Mr Beaudry said although the calf was the youngest in the junior championship class, he was impressed with its rib and sharpness.