A $65,000 bushfire fundraiser was one of the highlights World Wide Sires Evolution Sale at International Dairy Week on Wednesday. 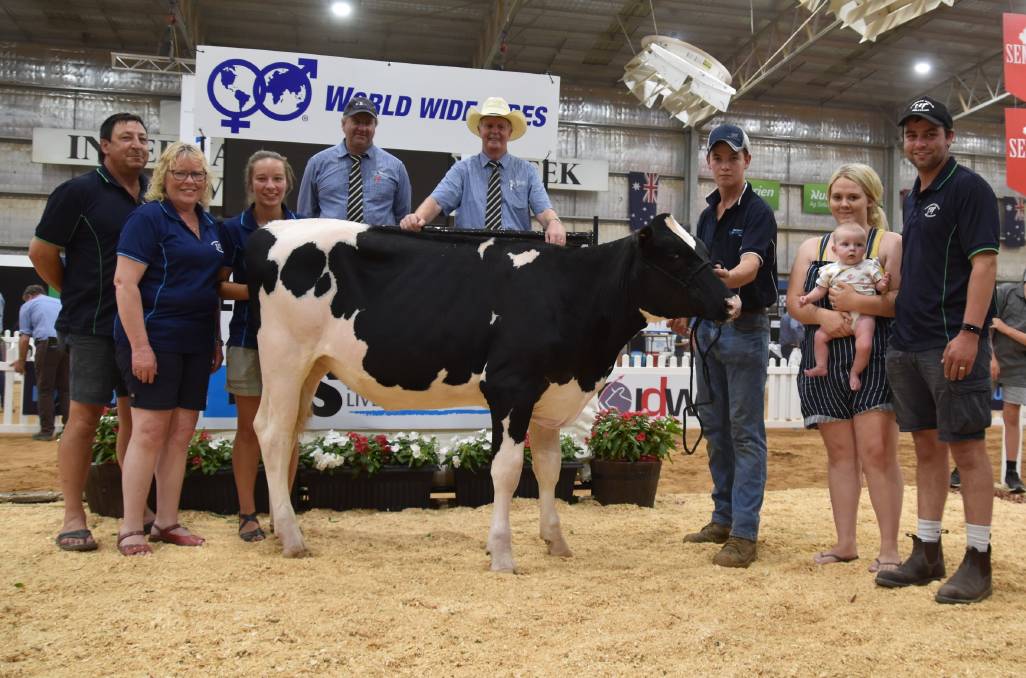 A $65,000 bushfire fundraiser was one of the highlights World Wide Sires Evolution Sale at International Dairy Week on Wednesday.

The fundraiser at the start of the sale saw a special offering - the pick of the 10,000-strong herd from Australia's largest dairy operation Australian Fresh Milk Holdings, owned by the Moxey and Perich families.

Bidding was brisk on the enticing offering, which sold for $50,000 to a syndicate of Ulupna Pastoral Company, (Danny Thomas and John Nicoletti), Coppertree Farms, Flanagan Marketing Services and Woodlawn Holsteins.

After the bushfire item was auctioned, the sale proper started slowly but picked up with two highly genomically rated offerings.

The heifer was offered by Mitchell Jones, Foster, Vic, and bought by Bryan and Jo Dickson, Terang, Vic.

It was number 18 on the January list of the Australian Breeding Values top genomically tested Holstein cows and heifers with a Balanced Performance Index of 365 and a Type Weighted Index of 344.

Mr Jones bought its mother at IDW four years ago as a 10-month-old heifer.

"The mother has bred on very, very well for me," he said.

It had already produced 16 heifer calves through being flushed to sexed semen, with four by Jeronimo.

"We call her Tiffany - she will never go anywhere, she will die on the place.

"She carries one of the best families in the country, she breeds really well for us, she milks extremely well, she continues to get back in calf and flush for us and her daughters that we have bred have been exceptional, absolutely exceptional."

Mr Jones said he was "pretty stoked" to get top price and had not expected the heifer to make anywhere near that price.

Buyer Bryan Dickson said he liked the heifer because he did not have any cows out of the Doorman branch of the Tiffany family.

"I owned the Tiffany Informer cow - I bought her at dairy week lots of years ago - and it has always haunted me that I gave her away," he said.

He was also impressed with the genomic results.

"There's three main production daughters out of the Tiffanys and I have animals now out of those three branches."

Mr Dickson plans to flush the heifer to produce more animals to show, but mainly to milk.

He admitted that the $12,000 price tag didn't necessarily make commercial sense for his dairy farm operation.

"It's a hobby - people have train sets, people race motor cows, people do other things, I buy expensive cows and lose money on them," he said.

"My kids will hopefully retire from showing cows in the next eight to 10 years and then I will just milk them."

Lightning Ridge SMDW Crusbull Princess, which was highly rated on the US genomic system, was offered by the PMDW Syndicate and sold to NR & MA Stanley, Yarram, Vic.

Dairy Livestock Services manager Scott Lord said although the sale started slowly, the average at $5294 was $400 higher than last year's sale and all lots offered were sold.

The genomic ratings of the top-priced lot were sought after and had generated a lot of inquiry, he said.

Mr Lord said competition was strong from Gippsland, Tasmania, as well as WA and SA.

The four sales across the week at IDW had shown signs that things were picking up across the industry.

There were 159 buyers registered for the sales - 20 or 30 more than last year - with 71 buying animals, embryo packages or semen.

"So there was a willingness to operate but clearly at Wednesday night's sale, there was some strong Gippsland interest and they realised they could purchase some above average genetic quality at reasonable value, so they got in," he said

Mr Lord said sales leading into Christmas were improved on the first half of the year and he anticipated demand later in the year could exceed supply.

There was strong interest from the export market.

"We've got a number of air freight shipments of breeder stock to South East Asia and they are going to be tight to find supply for," he said.