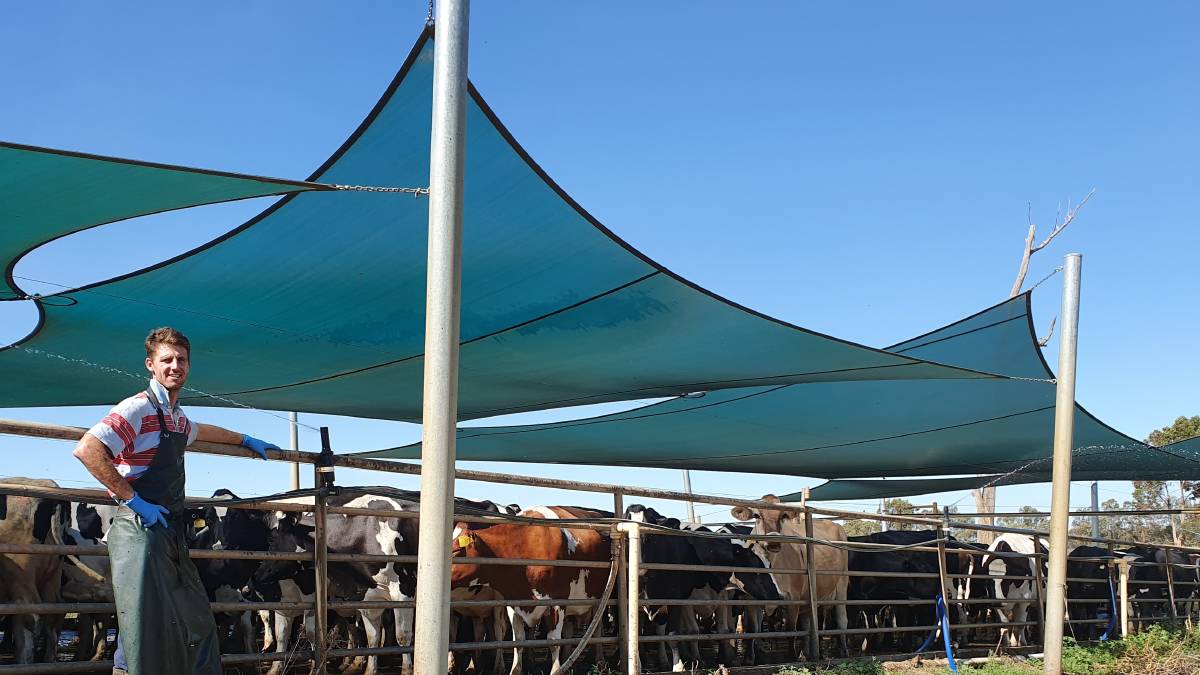 Northern Victorian dairy farmers Jack and Alec Young have planted more than 250 trees and installed new infrastructure to safeguard the welfare of their herd during warmer months.

Northern Victorian dairy farmers Jack and Alec Young have planted more than 250 trees and installed new infrastructure to safeguard the welfare of their herd during warmer months.

After moving to their 392-hectare farm in Wyuna, Victoria, near Shepparton seven years ago, the Youngs noted a lack of adequate shade was putting their herd at risk of heat stress.

Knowing dairy cows can be at risk of heat stress at temperatures as low as 25 degrees, the Youngs made informed decisions to give their herd some relief from heat and humidity.

"I just think the welfare of any animal in weather over 25 degrees is very important," Jack said.

"They really start to feel it and it's very noticeable - providing relief from heat stress should be a priority for all dairy farmers."

Starting with natural shade as their priority, the Youngs planted hundreds of trees in key paddocks throughout their property.

While the trees are not yet fully grown, the Youngs have already noted benefits to their farm and their herd.

"While the welfare of our herd is our first priority, planting more trees on our farm also helps make our farm more sustainable for the future," Jack said.

In addition to natural shade cover, the Youngs installed new infrastructure around the dairy shed to keep their cows cool during milking times.

They really start to feel it and it's very noticeable - providing relief from heat stress should be a priority for all dairy farmers. - Jack Young

They invested $30,000 to install shade sails that cover the milking yard, which reduces the risk of heat stress as the cows transition into sheds for their morning and afternoon milkings.

To complement their shade cover, the Youngs also use sprinklers to cool their cows even further, which operate on a water-saving cycle of seven minutes on and 15 minutes off during milking times.

"It's definitely worth the investment in shade cover just for the welfare component, and to minimise production losses during sustained heat periods," Jack said.

"The fact is that the less your cows are at risk of heat stress, the more they're going to produce. It's got to make an impact on your bottom line as well."

Heading into the warmer months, the Youngs adjust their feeding routine and the timings of their milking to minimise the risk of heat stress and maintain production levels.

As the calendar heads into late spring, cows on a spring-calving pattern are separated from the rest of the herd and receive higher quality feed to maintain production levels, as cows use more energy in higher temperatures. With the addition of an automated drafting gate, Jack and Alec can easily put both herds together during the day for shade under the sails and separate them back into separate herds at night.

With the feed pad a short walk from the dairy shed, cows often walk back to the dairy to stand under the shade sails after being fed or drink from easily accessible water troughs.

"The cows love it - when it's 40 degrees, they spend a lot of time coming back and forth to the milking shed for a drink or for some shade," Jack said.

"We have troughs on the exit to the dairy, troughs on the feed pad, and we have one in every paddock, which we clean regularly so the cows have easy access to clean drinking water."

Jack and Alec will also adjust their milking times as the temperatures heat up - bringing their morning milking forward one hour, and delaying their afternoon milking by one hour, so milking occurs in lower temperatures where possible.

Looking to the future, the Youngs have plans to do a lot more to reduce the risk of heat stress. "We are currently looking into portable feed pad troughs to move around paddocks to utilise all tree lines and reduce feed waste," Jack said.

"We'll also plant a lot more trees - but we plan to do them as groups, rather than in a line, to give the cows more cover."

Dairy Australia delivers a suite of resources to assist dairy farmers to make timely and seasonally relevant decisions for the health, welfare and productivity of their herds.

Dairy Australia's Cool Cows program uses the latest science to provide dairy farmers with practical information on how to reduce the impact of heat stress on cow productivity.

The Cool Cows heat stress booklet has received a 2019 update to bring farmers the most up-to-date information.