KI bushfire survivors Josh Graham and partner Lilly Buick say the generosity shown by the local community and beyond the island has been "overwhelming" - but in a good way. 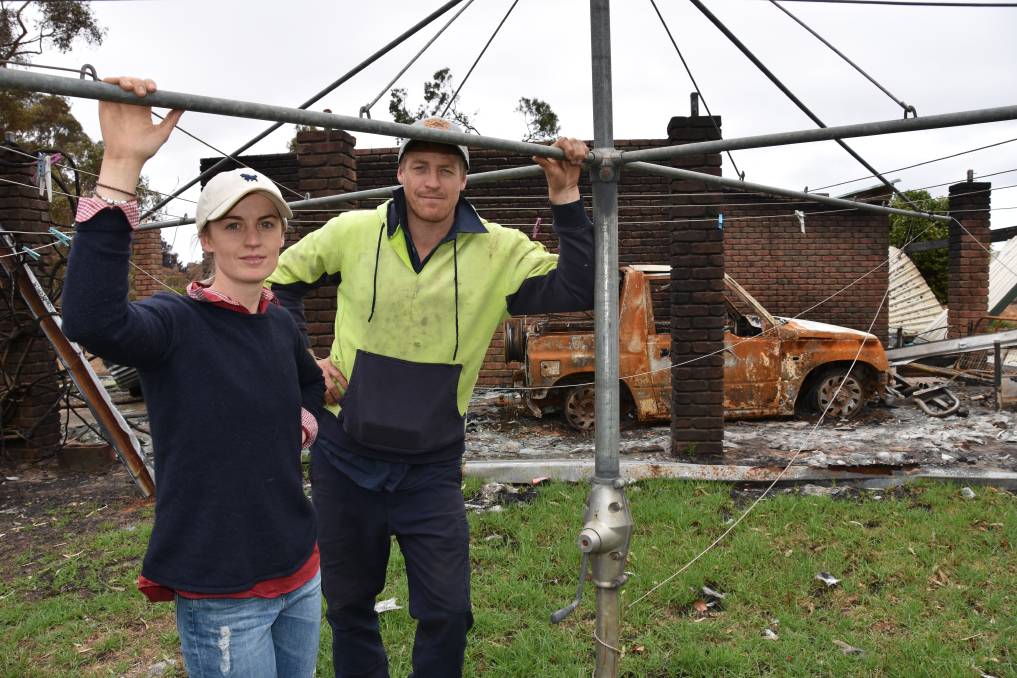 THERE is a long road ahead for Kangaroo Island farmers in their bushfire recovery, but the community spirit is alive and well.

They say the generosity shown by the local community and beyond the island has been "overwhelming" - but in a good way.

"Once the fire went through, we had two to three truckloads of people, some all the way from Yorke Peninsula, arrive with fencing gear and just got started, grabbing posts and getting fences back up," Mr Graham said.

"People have come with clothes, food, toiletries, vouchers, dog food, anything you can think of," Ms Buick said.

"Our friends also set up a GoFundMe page for our family, which has been extremely helpful."

The couple were also indebted to relative strangers, who travelled from the mainland to donate their caravan, stocked with supplies.

"They set it up in our shed, stayed the night and then left first thing in the morning," Ms Buick said.

"It has all been pretty overwhelming."

The couple run Glencorrie Border Leicester stud, which has up to MN3 status, so breeding up is the only way forward - a challenging process as most of their pastures and 900 rolls of silage were also destroyed.

Mr Graham said they were lucky the family business had country on the YP, where they have sent their surviving crossbred ewes and stud lambs.

"Thankfully we still have enough rams for our October sale."

Their Merino ewe flock will be kept on the island, with plans to containment feed.

"We were so lucky all our Merino breeders survived, so we will slowly chip away at getting our numbers up again," Ms Buick said.

The Grahams also bred their own Poll Dorset rams, with that ewe flock also hit.

"We use rams from Tattykeel (NSW), who have very kindly donated 30 ewes and 15 flock rams to us, which is so generous," Ms Buick said.

They have also had two hay drops from friends.

"We still have grain on-farm, but we will have to buy in straw," Mr Graham said.

The couple have had no word yet on when their house will be removed.

"They have yet figure out where they will put all the asbestos from the houses that were destroyed," he said.

They were considering moving to a different location on the farm to "get away from the dust".

They also have about 200 kilometres of fencing to replace, which BlazeAid has been helping with.

"But there is a shortage of materials," Mr Graham said.

"We will be standing up fences with droppers for now."

Looking ahead, a new shearing shed was on the agenda, while Mr Graham thought they may crop a bit more country as they rebuilt the flock.

"We also may double the area sown to kikuyu, as that has shown its resilience in these fires," he said.