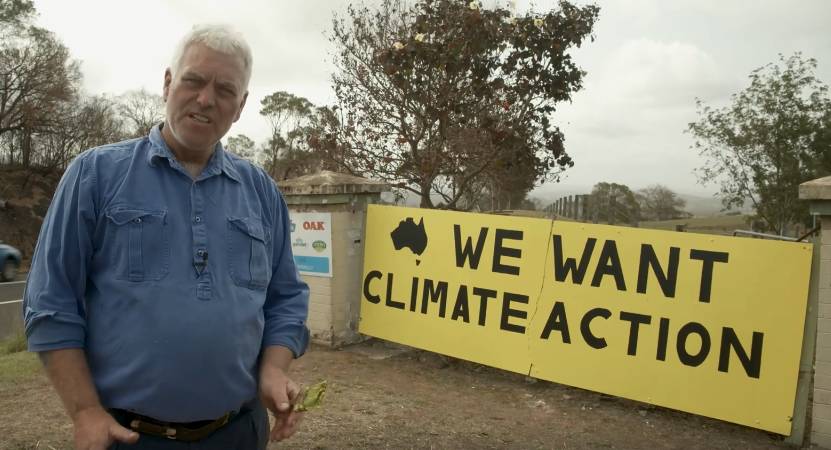 GRASSROOTS ACTION: Rob Miller kicked off the campaign after four bushfires ripped through his farm in a month.

A dairy farmer kicked off the campaign after four bushfires ripped through his farm in a month.

FARMERS across the nation are getting out the yellow paint to show their support for climate action, and the campaign is going viral.

Show Our Colours was launched by NSW south coast dairy farmer Rob Miller, who painted his farm gate yellow, with the message "we want climate action".

"It's been really devastating."

He made a video, calling on farmers and everyday Australians to get behind the innovative.

"I've got an idea for how ordinary Australians can show we want Australia to step up and lead on climate action," Mr Miller said.

"Paint your letter box yellow or put a yellow ribbon on your fence, put a yellow sticker on your car - be creative.

"Share what you've done, ask your friends and neighbours to do it too and together let's show our true colours on climate action."

His video, and others like it, have been widely shared on social media.

Broken Hill sheep farmer Anika Molesworth also recorded a video and said farmers were among the first to feel the true impacts of a changing climate.

"Farmers really are the canaries in the coal mine when it comes to climate change," Ms Molesworth said.

"As a young farmer, my future in the agricultural sector depends on us addressing climate change today.

"We need to be taking serious action today to curb emissions and prevent further damage to our climate being done.

"We can solve this problem by putting in place sensible and responsible strategies today."

💛Time to express solidarity with the farmers, communities, animals, ecosystems & landscapes under threat by climate change. Join the campaign. Find or create something yellow & lets stand together & turbo charge the action. #showourcolours#canariesinthecoalmine@farmingforeverpic.twitter.com/AvsMk8BW59

Central western Queensland grazier Jody Brown didn't have any yellow paint, so instead she took a video of yellow wildflowers that had come up in the recent rain.

"It's pretty amazing to see new life here, because three-quarters of the last two decades have been spent in drought," Ms Brown said.

"That drought has been exacerbated by climate change with record temperatures, a record number of hot days.

"We've been flogged with heatwave after heatwave. Every time you think you've got some seedlings because you actually got a bit of rain, they just fry because the earth is literally baking."

Esperance horse breeder Dodie Henderson said her industry faced the same water and feed dilemmas as everyone else.

"In a way it is harder for us to adapt," she said.

"Horses have a long breeding cycle, and they are harder to offload when times get tough. Planning is long, long term.

"Our ability to deal with the challenges brought about by climate change will be improved by policy that accepts the science, and provides us with information and encouragement to adopt farming practices and technology that enables us to mitigate, lower the rate of warming and the risk of an unlivable world."