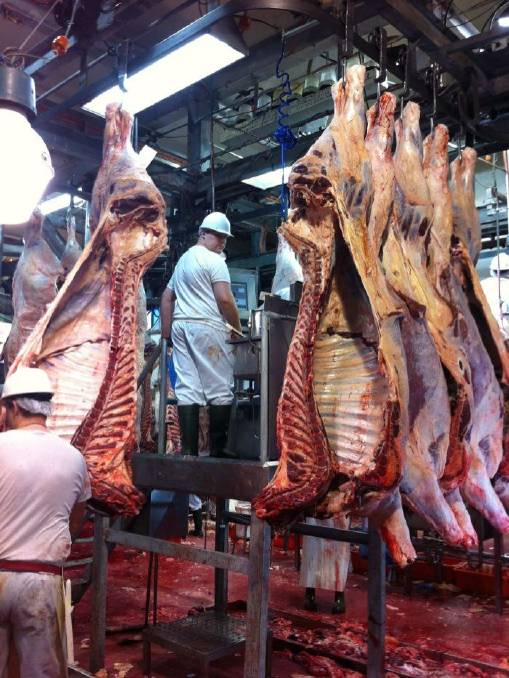 SLAUGHTER cattle prices are heading skyward as processors scramble to secure supply in a fast-shrinking pool.

Grid hikes have not been as dramatic as the young cattle market's surge but still remarkable, with red hot competition for cows in particular indicating producers under rain might be starting to take action on rebuilding.

Meat & Livestock Australia over-the-hooks indicator shows jumps in excess of 60 cents a kilogram weighted average across many specifications in the past three weeks in Queensland. Cows jumped 20c in the past week on top of similar lifts for the two weeks prior.

In NSW, grown steer offers are 20 to 25c above where they were a fortnight ago and cows around 20c. Victoria has seen lifts in the past week of 8c for cows on top of 20 to 23c the previous week and 12-14c for grown steers.

As rain makes the procurement job tougher for processor buyers, the ability for plants to continue to operate at full strength is waning.

Patrick Hutchinson, who heads up the processor's peak advocacy body the Australian Meat Industry Council, said there were no reports yet of desperate shortages of cattle forcing shift shutdowns but decisions were likely being made on a day-to-day basis.

The long-talked-about supply crunch is hitting beef processors amid a softening in market access courtesy of coronavirus and competitor trade deals.

Mecardo analyst Matt Dalgleish reports the lift in the cattle market on the back of widespread rain in the past few weeks has combined with easing beef export prices to put pressure on processor margins.

Mecardo's processor margin model of January came in at positive $237, which was 42pc below the December figure.

Still, it is a strong start historically speaking, according to Mr Dalgleish.

Most industry watchers have tipped 2020 to be a volatile and challenging year for the processing sector.

MLA projections have adult cattle slaughter taking a big hit, falling 15 per cent year-on-year to 7.2m head, and then another fall next year to 7.1m.

However, the developments around coronavirus have thrown a big spanner in the works and could well exacerbate the expected easing of processor profits as the pool of supply tightens.

Mr Hutchinson said the outbreak had occurred following fluent orders right up to Lunar New Year so that product was now in storage across China.

It was impossible at this point to predict the extent of the effect it would have on Australian exports, likewise the highly publicised US China trade deal, he said.

"This deal could be a balanced positive/negative for us or it may well be greater market access for our products," Mr Hutchinson said.

Despite the headwinds and uncertainty, sentiment appears to be holding up.

Domestically, beef dollar sales increased in the retail channel last year with growth across the major retailers as well as in butcher shops, MLA has reported.

Demand has been particularly strong in premium areas such as prime steak, pre-prepared beef and premium mince, highlighting the value consumers place on beef despite the price gap, MLA analysts said.

"And the underlying fundamentals are still very good on the global market - populations, wages and consumption are all rising."

SEE ALSO: Alternative proteins not the threat we thought