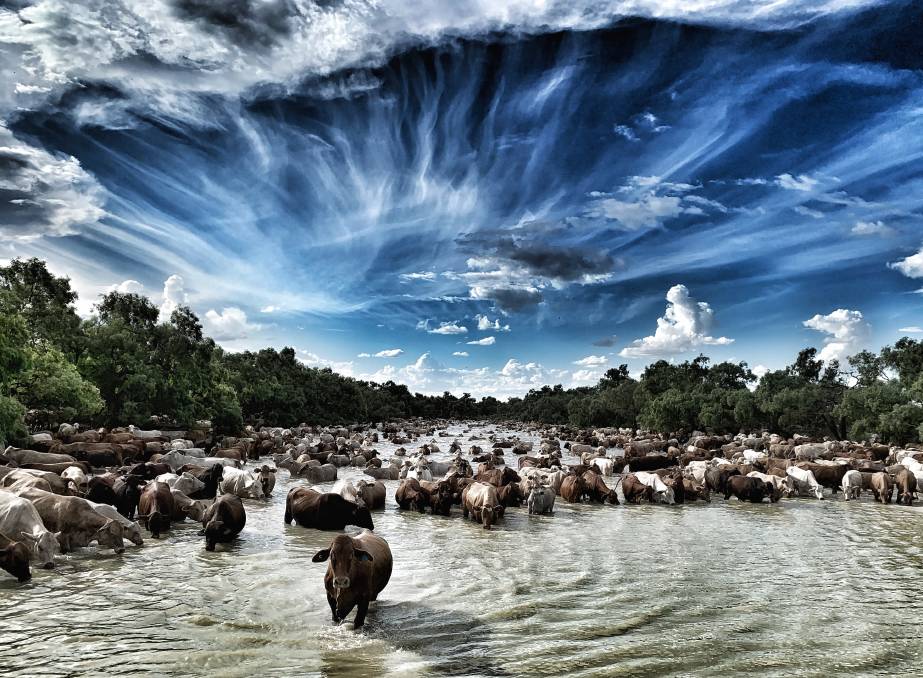 IT looks like a river but it's actually a massive body of water in a paddock and the cattle are survivors from last year's horrendous North Queensland floods.

They're a composite breed, raised on Australian Agricultural Company's Canobie Station 200 kilometres north of Cloncurry, which was swamped.

Behind the i-phone lens was Victorian-born Stephanie Griffiths, a nurse by trade who has a passion for both campdrafting and photography and decided to pack her bags and go contract mustering in Queensland.

With her partner Nick Hancock and a team of eight other musterers, they swam the cattle through this temporary lake and when they stopped to water their horses, this was the sight before them.

"You have to marvel at the resilience of those cattle, you'd think they'd be sick of swimming.

"We were moving them to a paddock that had been re-fenced. There's no service out there, I just take the phone for photos."

Ms Griffiths, who grew up on a Hereford breeding property near Beechworth, said she had seen some pretty cool things in her time mustering and droving but such a large mob of cattle in such an incredible environment was special.

She said she loved the lifestyle.

"You live in a trailer but you work with great people and see so many great places," she said.

AACo chief executive officer Hugh Killen said the company raises its cattle in some of the most pristine and beautiful country in Australia, as shown in this photo.

"Tragically, Canobie Station was swamped by water early last year, causing more than 40,000 of our cattle to die," he said.

"We lost infrastructure such as buildings and hundreds of kilometres of fencing as well. It was a tough time for our teams on station and the entire AACo family.

"The rebuild has been a huge project. As well as the buildings and fences, it has included new water infrastructure and dozens of bigger and better flood refuges for our cattle, to keep them safe.

"We are now better prepared, should similar weather hit us again."

About 800,000 hectares of AACo property was affected during the 2019 floods. Canobie station was one of the those that was heavily impacted. More than 500klm of fences had to be rebuilt.

If placed end-to-end, the wire used in rebuilding the fences would stretch from Brisbane to Melbourne.

AACo estimates the cost of the rebuild at $9m.