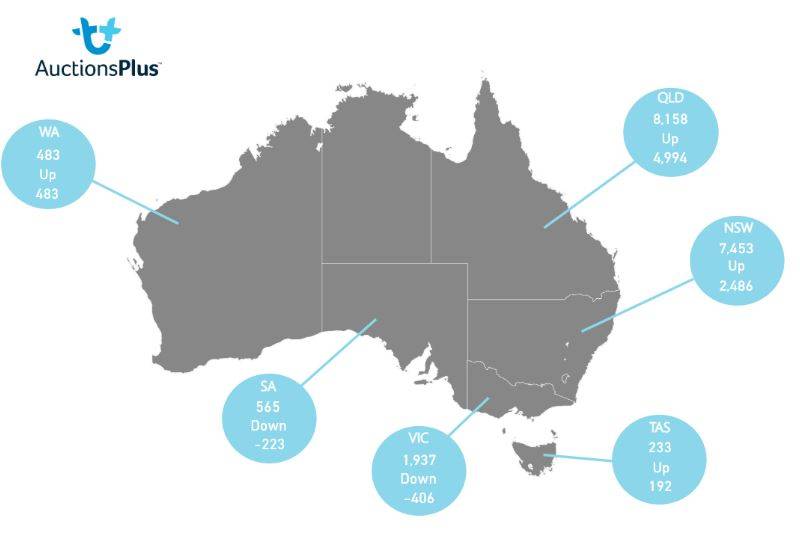 The breakdown of cattle sales by State. Source AuctionsPlus

AuctionsPlus have sold a record 17,849 head this week, making it their biggest week on record.

Records were smashed in our cattle sales with the Weaner and Yearling sale hosting 13,886 head over 268 lots for a whopping 91 per cent clearance and the Eastern States sale presenting 3,963 head over 112 lots for a combined 17,849, up 7,006 from last weeks sales.

Southern Queensland purchased the majority of the cattle, with 3,110 heading there.

If you had a paddock full of steers, especially at the lighter end it was your week to sell with a 99pc clearance over the steers category and the sub 200kg steers up 105c/kg on this time in January.

After a huge jump in the market last week cows and calves dropped back down $363 with a reduced clearance rate from the 100pc.

PTIC heifers saw another jump in the market this week rising $55 to an average of $1,721.

The top price was gained by 35 head of PTIC Angus heifers from the Berridge family near Tenterfield, NSW. These LPA accredited hiefers were 100pc Speriby North blood and were PTIC to a Speriby North bull.

SA saw the biggest variance in the average of PTIC heifers, up $173 on last weeks to average $1,724.

Sullivan Pastoral near Canunda sold the top lot in SA, consisting of 50 heifers going for $1,780.

On the other hand, PTIC cows after such a strong week last week took a $75 tumble to average $1,830.

Clearance just hit the pass mark with Queensland dragging the chain with the lowest clearance.

NSW dropped from its 100pc clearance last week to only 61pc. Nationally prices ranged from $1,300 to $2,625 with the top price returned from the North Coast, NSW, for a line of 23 Angus PTIC cows weighing in at 637kgs, sold for Mill Creek Angus.

Cows with calves at foot also took a little flip-flop dropping $363 on last week to average $2,073, however, this is still a strong average.

Nationally the clearance rate took a dive with Victoria having the biggest slump however it was still home to the top priced lot of $2,950.

A line of 18 PTIC cow and calves sold on account of SP & JL McLeish near Sandy Creek and were from the Barwidgee bloodline with the calves been sired a Glen Angus Bull.

SA also had one lot of 17 joined cows and calves selling strongly at $2,540, by P. Lowe near Kalangadoo. 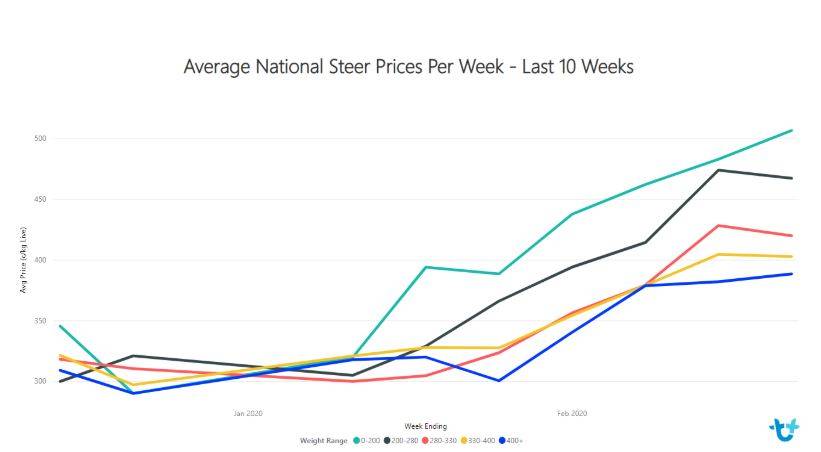 Lighter steers under the 200kg mark saw a decent jump in the market, increasing 119c/kg from this time last month.

This price was returned by 38 Angus weaner steers from Moulamein in the Riverina, averaged 124kg, which are 5-7 months of age.

Other highlights came from a line of 34 Charolais x Angus steers weighing in at 173kg which sold for 552c/kg from Mandurama, Central Western NSW.

Those with steers weighing 200-280kg were on the right side of the market this week with the average up 105c/kg from this time in January.

The average was at 471c/kg and ranged from 368-549c/kg with the best sellers being purebred Angus weaned steers.

They came from Holbrook in the Riverina weighing in at 206kg and were 5-7 months old.

Looking away from the Angus weaners, a line of Charolais x Droughtmaster steers up in QLD went for 461c/kg and weighed in at 264kg.

Again the top price was returned by Angus weaners, 8-10 months old weighing in at 281kg from Merriwa, NSW.

Notably the second best in this category came from 52 Santa Gertrudis backgrounder steers from Taroom, Queensland weighing in at 285kg and going for 455c/kg.

The top 10 lots in this category were all Angus bred with the top price coming from Big Springs in the Riverina, NSW with 49 backgrounder steers weighing in at 349kg selling for 456c/kg, and more notably travelling up to southern Queensland.

A lot of 33 Hereford steers were next on the list weighing in at 313kgs and selling for 399c/kg from Shooters Hill, Central Western NSW.

They weighed in at 423kg and were sired by Booroomooka and Larrikin Angus bulls. 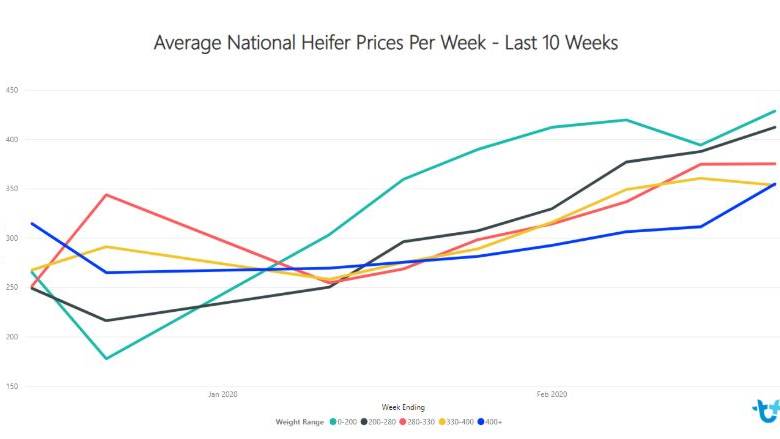 The top price went to 51 weaned heifers for the Crawford family from Moulamein in the Riverina, 5-6 months, weighing 119kg.

The best price returned in Queensland went for 478c/kg and weighed in at 188kg for Carabar Angus from Meandarra.

Other highlights include a line of Droughtmaster heifers, 8-10 months, 230kg from Meandarra, QLD selling for 415c/kg.

The top price came from Deepwater, NSW and were a line of ex Mundoo Angus Stud heifers, 18-19 months, weighing 295kg.

The next best off were down in Victoria with 17-18 year old Angus heifers weighing in at 359 selling for 387c/kg.

The best off were found in SA with a line of 17-18 month old, 406kg, Angus feeder heifers for A/C "Daiquiri Nominees".

Notably a line of NSW Angus hiefers weighing in at 424kg, 16-18 months were sold from Rennie in the Riverina and are heading to Queensland.

Down in Tasmania weaner heifers and weaner steers both took a little tumble in the market down 39c and 28c respectively.

PTIC heifers averaged just less than the mainland at $1,630 with the range from $1,440-$2,200. The top price was achieved by Deep Creek Cattle Services from Upper Stowport with a line Kinloch and Hazeldean dams and Prime Katapault Sired heifers, 16-19 months, weighing in at 496kg.

They were LPA, MSA, Nil Grain, Nil Antibiotic and Never Ever accredited.

Over in the far west, WA saw a 98.0pc clearance rate on 483 head with 188 of them going into the Central and Hill region of SA.

Out of them was notably a line of 9-10 month old Charolais x Angus steers which weighed in at 378kg and sold for 321c/kg liveweight.

The top priced lot out of WA went to a line of Angus and Angus X heifers and cows lot for A/C "Henderson Glendale" which ranged from 24-95 months, weighed 373kg dressed and sold for 443.7c/kg dressed.