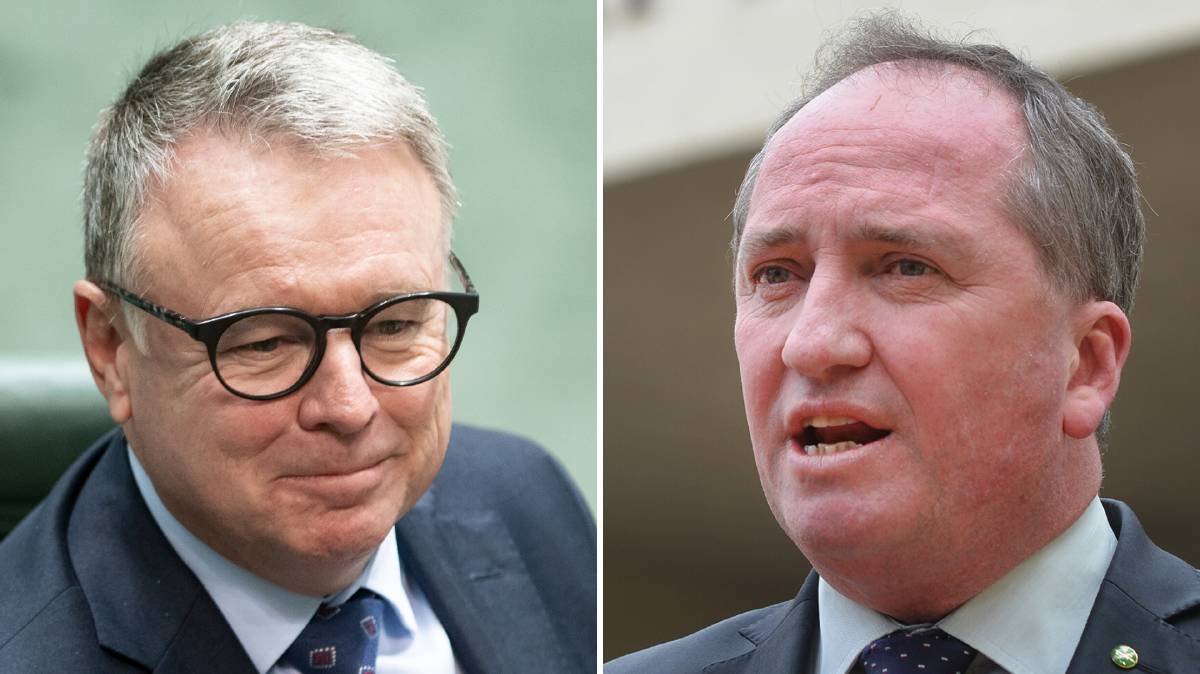 HALLWAY CLASH: Joel Fitzgibbon and Barnaby Joyce had an impromptu debate in the parliament halls.

A fiery clash between two rival MPs has erupted in front of cameras in the halls of parliament over climate policy.

A FIERY clash between two rival MPs has erupted in front of cameras in the halls of parliament over climate policy.

Mr Fitzgibbon said a number of agricultural organisations, including the National Farmers Federation and the Meat and Livestock Australia, had already committed to zero net emissions by 2030.

"We're going to reach out to these organisations including BP, Santos, other oil and gas companies and say 'now you've made a commitment to zero net emissions, how can a Labor government work with you to help you meet your aspirations?'," Mr Fitzgibbon said.

Mr Joyce called the plan "a load of pig manure".

"Reaching out, that's how you're going to do it? You're going to make the equation work by putting trees back on people's properties whether they like it or not.

"We're going to let the shrubs grow back on the country."

Mr Fitzgibbon said no coal miner would lose their job as a result of Labor's new policy.

"People are over the political spin, they want action, they want sensible action," he said.

The rest of the debate descended into insults and barbs, as the two spoke over the top of each other for several minutes.

Labor leader Anthony Albanese called for an end to the climate wars, as most Australians "just want to get this done".

"We're now living in dangerous times - the footage of the navy evacuating children from burning beaches will not be forgotten," Mr Albanese said.

All states and territories have already adopted a net-zero emissions target by 2050, as have 73 countries including the United Kingdom, New Zealand, Canada.

Mr Albanese said the policy should be "non-controversial in Australia, as it is in most nations".

Labor will ditch Kyoto carry-over credits, the controversial emissions accounting technique the Coalition is using to say the nation will meet its emissions reduction target.

Australia is the only country signed up to the Paris 2030 agreement using Kyoto carry-over credits.

"This will be a real target, with none of the absurd nonsense of so-called 'carry-over credits' that the Prime Minister has cooked up to give the impression he's doing something when he isn't," Mr Albanese said.

"That's not acting. It's cheating. And Australian's aren't cheaters."

Mr Albanese said the private sector would still be able to fund new coal power plants, however the reason it wasn't was because "it doesn't stack up".

"Everyone in the electricity sector knows that the only way a new coal power plant will be built in Australia is through significant taxpayer subsidies, including a carbon risk indemnity that the Australian Industry Group estimates would cost up to $17 billion for a single plant," Mr Albanese said.

Anthony Albenese indicated agriculture was one of the areas were emissions could be reduced.

He did not elaborate on whether meeting the target would require people to consume less meat and dairy.

The National Farmers Federation (NFF) flagged concerns, stating it would oppose the policy if it was going to harm the ag sector.

"We simply could not support a policy that limited the growth of the red meat sector or any other sector for that matter," chief executive Tony Mahar said.

Details of how Labor plans to reach the 2050 target are yet to be revealed, however carbon capture incentives for farmers has been suggested, a policy NFF supports.

The Coalition honed its attacked towards the policy's potential impacts on agriculture.

"The Opposition leader has no idea what this target will do to dairy farmers, livestock producers and rural customers," Ms Landry said.

"The people on the land will do the heavy lifting, bear the financial cost and suffer the most from these policies.

"Labor has to take the agriculture out of their sights."