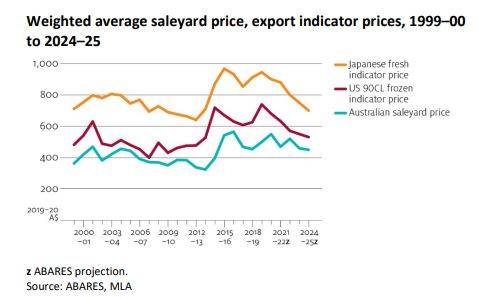 THE strength of global beef demand will prove more influential on saleyard cattle prices than rain in the next financial year, particularly given pasture recovery is going to take months and in some cases years, senior government economists believe.

The latest beef outlook from the Australian Bureau of Agriculture Resource Economics appears to be taking a more restrained view of the current grass fever-driven rocketing market, where restockers have pushed young cattle prices beyond 750 cents per kilogram carcase weight.

It is forecasting only a 7 percent rise in the weighted average saleyard price of cattle to 538 cents per kilogram carcase weight for 2020-21.

Below average grazing conditions are expected to persist for the rest of 2019-20, despite the big recent rains.

At the same time, high export prices have made it profitable to increase the number of animals passing through feedlots, despite big feed costs and the higher costs of stock.

The incentive is there for producers in big cattle regions to continue selling.

Despite disruptions in exports to China on account of coronavirus, ABARES' projections have Chinese demand for beef to remain elevated in the short term. It has been this demand that has been driving high prices in Australia throughout this financial year.

African Swine Fever has led to an estimated protein gap of around 20 million tonnes in 2020, according to the European Commission. ABARES says high pork prices in China have led to consumers substituting towards other types of meat, including beef.

The value of Australian beef exports reached record levels in the first six months of this financial year. As reported by Ms Eather, the average export unit value for fresh and frozen beef reached $8.54 per kilogram, up $2 more in real terms than the previous decade.

China became Australia's most valuable beef market in the first quarter, accounting for 25pc of the total value.