Lamb prices have continued to rise this week although export heavy weights have been a little cheaper. 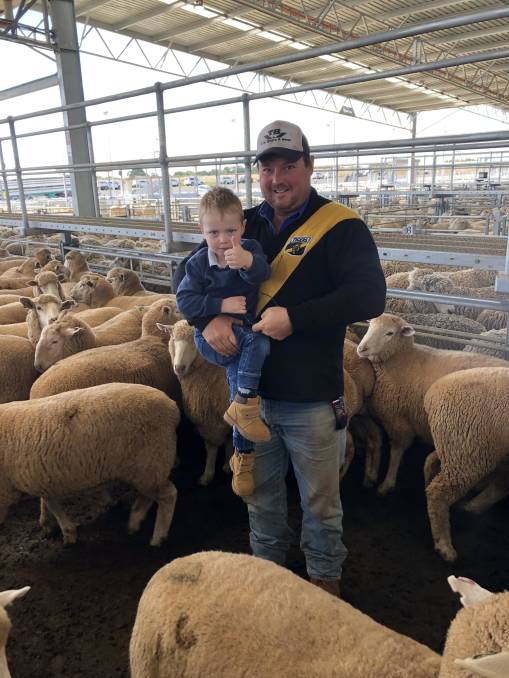 THUMBS UP: Danny Maher and son, Tommy, Precision Production, Dean, with their $378 heavy export lambs at Ballarat on Tuesday.

Ballarat has continued as the epicentre for high sheep prices with heavy export lambs topping this week's sale on Tuesday at $378.

That record was given a fright this week when 125 export lambs offered by fellow Dean district producers, Brian and Danny Maher, trading as Precision Production, were knocked down for $378 bringing a tidy return of $47,250.

Both lines were sold through Ballarat agency, T.B. White.

Danny Maher, who was at the sale with his young son, Tommy, said the high prices helped make up for the times when his family had lost money on lambs bought to fatten.

The Mahers are focused on trading sheep at the moment and will have more to sell in coming weeks.

Mr Maher said this week's first-cross/Dorset lambs were about 11 months of age and would have dressed around 40-plus kilograms.

Yardings numbers at Ballarat soared by 9030 this week to almost 40,000 including 25,682 lambs but overall the market was firm to dearer although heavy lambs were back by $10-$20 a head.

More rain this week, particularly in NSW, is likely to continue a shift to flock rebuilding which may further squeeze lamb and mutton sheep supply.

Saleyard lamb and mutton prices have continued to head skywards with the Eastern States Trade Lamb Indicator jumping another 48 cents a kg carcase weight in the past week to 952c.

The mutton indicator has climbed 28c in the past week to 716c.

In contrast the lamb slaughter continued to power along with a 3pc lift in the eastern states to 334,179.