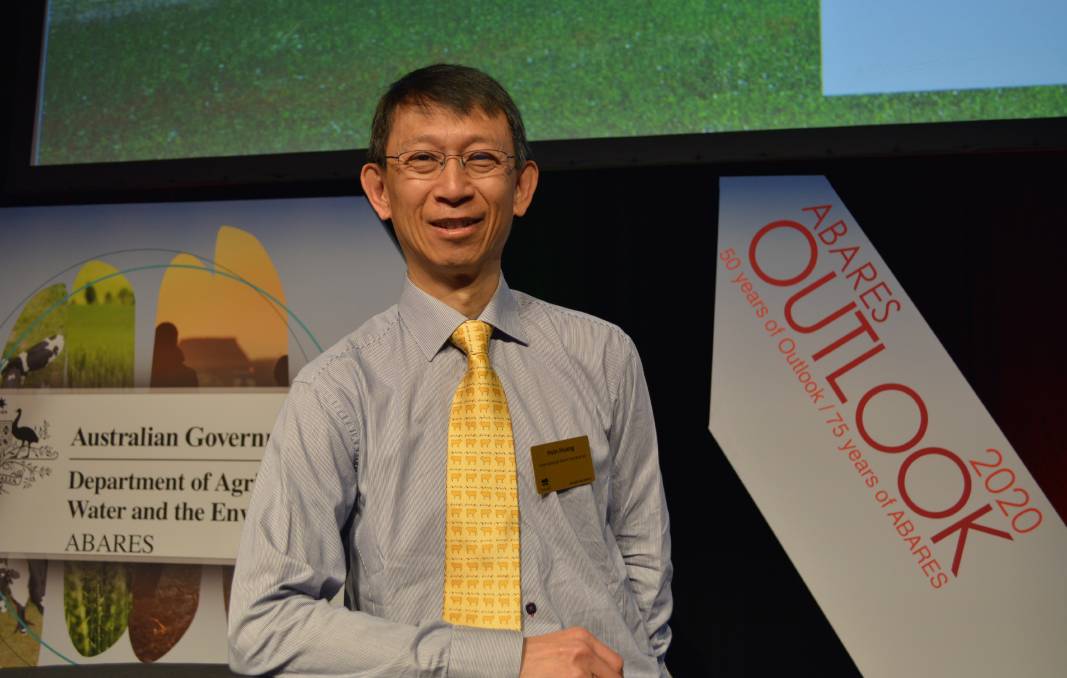 WORK TOGETHER: Secretary general of the International Meat Secretariat Hsin Huang in Canberra.

THE idea that eating meat, and the livestock business, is detrimental to the environment is nothing new to those whose livelihood depends on beef.

In fact, the world needs livestock to be sustainable, says the man who heads up the organisation representing the red meat and livestock industry at an international level, Paris-based Hsin Huang.

As secretary general of the International Meat Secretariat, he well knows the difficulty the industry has in telling its story. The diversity of production systems and differing endowments, the complexity of supply chains and the competitiveness of the business makes working together and cohesion a big task.

But Mr Huang says it's time we found the way.

"If we can't convince the public and policy makers of the benefits we bring to the table we will be relegated to has-beens," Mr Huang told the big agricultural commodities conference ABARES Outlook in Canberra today.

"We have all heard in the media that somehow the livestock sector is a serious negative in terms of climate change.

"As an industry we are actually part of the solution for nutritional security and environmental sustainability.

"We can be the heroes in this discussion."

Mr Huang's message was that globally, livestock can not continue business as it has done in the past.

It has to sing from the same hymn sheet.

One of the key things livestock was not being credited for was its ability to upscale waste to high value delicious and nutritious food, he said.

"Cattle are fed a variety of products - grains we don't want to consume as humans and other feedstuff that would otherwise be thrown away," Mr Huang said.

"Globally, 86pc of the materials fed to livestock are not edible to humans."

Ruminants, on average globally, consume .6kg of edible protein for every kilogram of meat produced.

Co-products, such as offals, hides and skins, tallow, gelatin and retinol, are valuable products in their own right,

And livestock provides a livelihood for the poorest one billion people in the world.

It uses mainly land not suited for crops and for which there is no other productive use - 70pc of the world's productive land can only be farmed for livestock.

The list is endless, but these are the key messages that need to be communicated and it rests on the shoulders of all in the industry to know these facts and to tell the story.

"Livestock is in the interesting position of being a significant participant in carbon sequestration, unlike many industries," Mr Huang said.

Perceptions around greenhouse gas emissions and beef production were hard to understand, he said.

"My carnivorous habits - and I'm not exactly a light meat eater - come out at 750kg of carbon dioxide emissions per year on most GHG calculators," he said.

"My flight from Paris to Canberra was well over 2 tonnes."

He saluted Australian beef's bid to be carbon neutral by 2030, saying it was the first of its kind, very ambitious and being watched with interest by beef industries in other countries.

The Brazilians had a similar initiative but at a more limited level, he reported.

"I can assure Australian beef producers your peers around the world are also working very hard on sustainability," Mr Huang said.

"I do also make the point that in order for environmental choices to be effective, they have to align with economics."