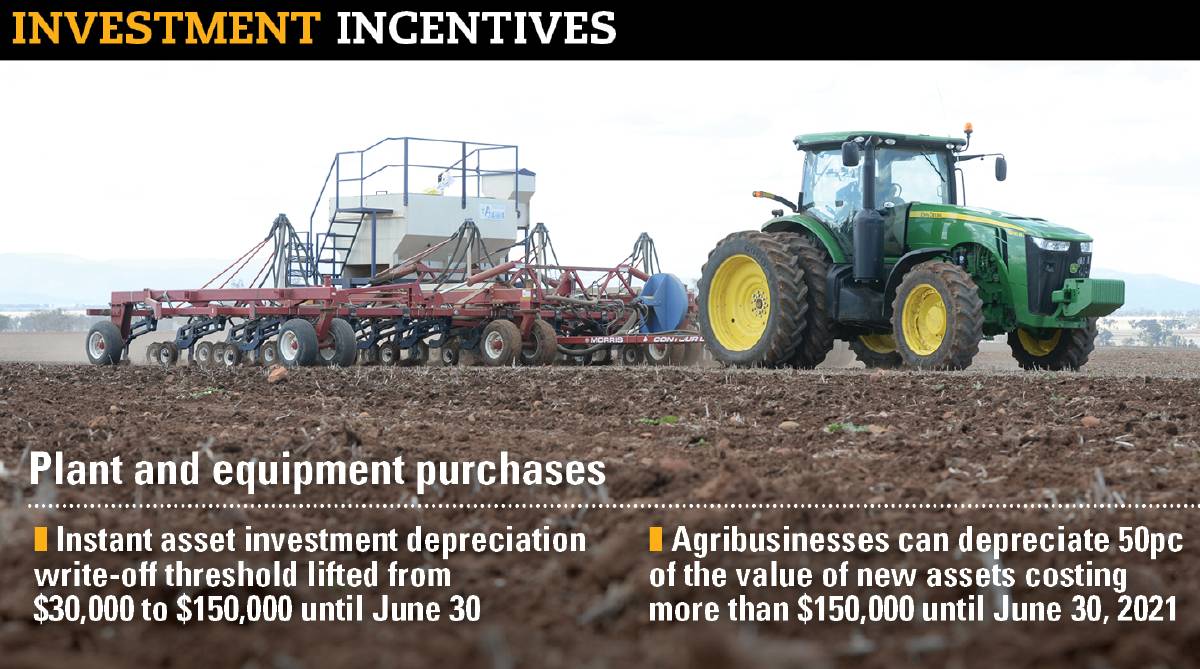 Despite the drought draining many farmers' enthusiasm for buying up big on new gear, the federal government has rustled up another round of tempting taxation depreciation incentives as part of its whopping $17.6 billion fiscal stimulus package.

As Canberra rolled out the big guns to fight the economic slowdown caused by the coronavirus health scare, rural industries were being urged to do their bit to keep the economy from tail-spinning into recession.

Popular instant depreciation deduction incentives which previously allowed small and mid-sized businesses to spend up to $30,000 on equipment have now been beefed up to a $150,000 spending limit, until June 30.

Alternatively, plant investments worth more than $150,000 will qualify for a one-off 50 per cent depreciation claim against a regional business' or farmer's taxable income until July 2021.

The stimulus package has also offered a tax-free wage payment booster of $2000 to $25,000 for eligible rural businesses employing an extra worker before their March quarter business activity statements are due, or until June 30.

A 50pc wage subsidy for new apprentices and trainees is also on offer.

"The stimulus measures will benefit farmers, small businesses and households - it will be a welcome boost for agriculture and the bush," said National Farmers Federation chief executive officer Tony Mahar.

He hoped a further $1b earmarked for a regional and community fund to support industries hit by the economic fallout of COVID-19 could provide timely help for high end export sectors such as seafood which suffered a sales collapse when the pandemic began in China in January.

Coronavirus is tipped to slash about $390 million from the Australian seafood industry's bottom line this year.

Meanwhile, producers depending on seasonal workers and backpackers, such as in the horticulture, pork and grain sectors, now struggled to find the international workforce they relied on because of tightened travel restrictions.

NFF economic policy director Pru Gordon felt some of the regional funding package may be well placed helping lure more domestic workers back to farms in these industries.

Commonwealth Bank of Australia's regional and agribusiness banking general manager Grant Cairns reported some rural areas as notably more cautious than others about splashing out on new investments, particularly in drought-savaged Queensland and NSW, but there was considerable cause for optimism across many farm commodity markets.

Many farmers are still taking stock of their position rather than rushing into anything - Grant Cairns, Commonwealth Bank

"We've already seen some investment intention feedback - from turf farmers to oilseed, egg and sugarcane producers. They're interested in how tax write-offs may help," he said.

"The sugar outlook is far more optimistic after some very bad seasons and weak prices, so it's no surprise to hear of growers looking to upgrade.

"There's been widespread rain, too, but a lot of areas need much more, or follow up falls, at least, which means many farmers are still taking stock of their position rather than rushing into anything." 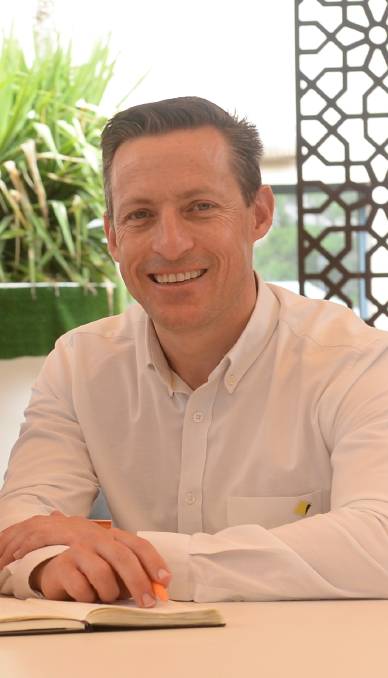 He said each farm's priorities varied.

Many livestock producers were already spending on fencing, others wanted to put funds towards restocking, while a lot of drought-hit croppers were currently attending to chemical, fertiliser and seed requirements so they could grow a crop this year.

Most of our producer clients aren't looking to buy much because they're focused on managing debt - Scott Christian, Boyce Chartered Accountants

Central NSW based director with rural accounting firm Boyce, Scott Christian, said while the latest offer of much bigger tax depreciation write-offs on equipment investments promised farmers handy reductions in their final tax bill, tax was not necessarily a big concern at present.

"Most of our producer clients aren't looking to buy much because they're focused on managing debt which built up during three years of drought," said Mr Christian at Dubbo.

"Other farming regions may be luckier, but the latest depreciation opportunity has not been as well received here as those initial offers on $20,000 equipment investments four or five years ago.

"I don't feel the business spending incentive take-up will be strong in the eastern Australian ag sector."

He also noted farmers already enjoyed full depreciation deductions against their taxable earnings if they invested in fodder storage or water supply infrastructure.

There was no need to unnecessarily start buying tanks thinking the cost was only deductible until June 30.

However, any business genuinely looking at other plant or equipment upgrades could write down some significant tax costs, even if they posted a loss this financial year and rolled the deduction credit into 2020-21 or later.

A $1m cotton picker and a couple of tractors bought before July and instantly depreciated at 50pc may net a farming enterprise a $100,000 deduction on its next tax bill, or stretch over two or three years.