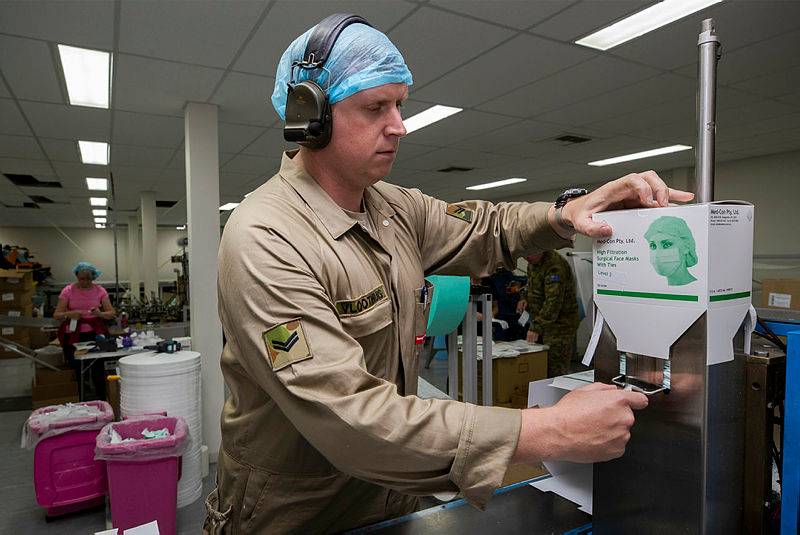 HELPING HAND: The need for masks was so desperate, the Department of Defence was called in to provide labour at Med-Con's manufacturing warehouse.

"We were doing one manufacturing shift a day, four days a week. Now we're doing three shifts a day, seven days a week."

A REGIONAL Victorian business is leading the fight to restock the nation's dwindling medical supplies, manufacturing almost one million surgical masks a week.

Restrictions on elective surgeries are set to ease, however many hospital and healthcare groups have raised concerns about the shortage of masks.

Shepparton manufacturer Med-Con has increased its production fourfold in the past six weeks.

Med-Con co-owner Ray Stockwell said the government had provided his company with a $1.44-million grant, allowing it to scale up and send every mask it produces to the national stockpile.

"We were doing one manufacturing shift a day, four days a week. Now we're doing three shifts a day, seven days a week."

Med-Con has purchased another three manufacturing machines, being build just up the road at Echuca, which are expected to arrive in June and allow them to double their production to 1.8 million masks per week.

The nation's supply of masks was diminishing so quickly, the Department of Defence was called in to help Med-Con with the scale up.

"They upgraded our machines and helped with labour until we could get citizens in to fill the gap," Mr Stockwell said.

"It's not just the machines we need, there's people and raw materials as well and we were lacking all three for what the government wanted.

Although the government has lifted restrictions on elective surgeries, Rural Doctors Association president John Hall said many regional hospitals could be hindered by a lack of personal protective equipment (PPE).

"We've had a number of reports about supplies of PPE, and we must be prepared to deal with the surge in COVID-19 patients which has been predicted," Dr Hall said.

"Low stores might not last a week if it continues the way it is going."

Mr Stockwell, who was in a "semi-retirement phase" up until six weeks ago, said Med-Con expected to keep up its increased level of production until the end of the year.

"But after that no one knows - one would hope we have dropped back to normal in that time," he said.

"For now, we're just glad we can do something for the community and get these out as quickly as possible."