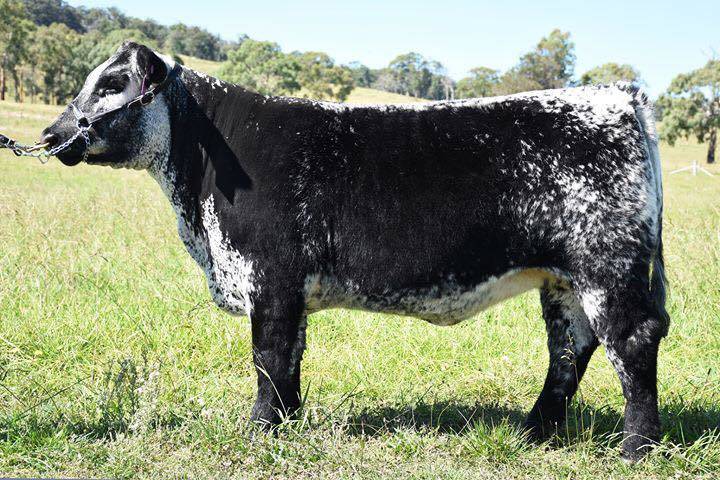 Sired by Johner Stock Farm Unmarked 2D and out of the Battalion Heartbreaker M1 female, she had been successfully flushed on a low follicle-stimulating hormone (FSH) program prior to the sale, producing eight embryos.

The upcoming young female with no doubt a big feature ahead of her sold unjoined with two straws of JSF Trade Secret 11A, and created spirited bidding from people in attendance of the sale as well as a number of buyers at home including underbidders Justin and Amy Dickens, JAD Speckle Park, Yeoval.

Around 1005 people tuned in to watch the sale online via Elite Livestock Auctions, including 249 bidders and 756 logged viewers.

This equated to the largest attendance for a beef cattle sale ever for Elite Livestock Auctions.

At 20 months he tipped the scales at 702 kilograms with an eye muscle area (EMA) of 108 sq cm, scrotal circumference of 39cm, rump and rib fat depths of 15 millimetres and 8mm, and an intramuscular fat (IMF) of 5.5 per cent.

The embryo calf sired by Mainstream Eldorado E11 and from Codiak Amanda 42Y was offered by Promised Land stud, Gleniffer.

Full detailed report in next week's issue of The Land.

The story Speckle Park heifer sells for $30,000 at Scone first appeared on The Land.

Sponsored by
Questions are being asked about "junk" carbon credits being issued to Australian farmers for land they never intended to clear.
Test
Large cattle and cropping property, Airlie, in north-east Victoria is on the market as the well-known Sinclair family gears up for succession.
Test
Lathering your hair with sheep shampoo, even touching up your lipstick - these are just some surprise new uses being tested for wool.
Test
Australian Wool Innovation will look to commercialise the market component of its oft-criticised digital platform WoolQ.
Test
As Australia prepares for the next bushfire season, aerial imagery is being extended over more of rural Australia to help responders reach the right places faster.
Test
Dairying in the Southern Highlands developed into a thriving business from the 1870s.
Test
From bigger numbers to tightened supply, saleyard throughput is dictating prices, albeit still well above last year's levels.
Test
Processors are being armed with real-time supply chain data thanks to a world-leading automated red meat shelf-life calculator.
Test