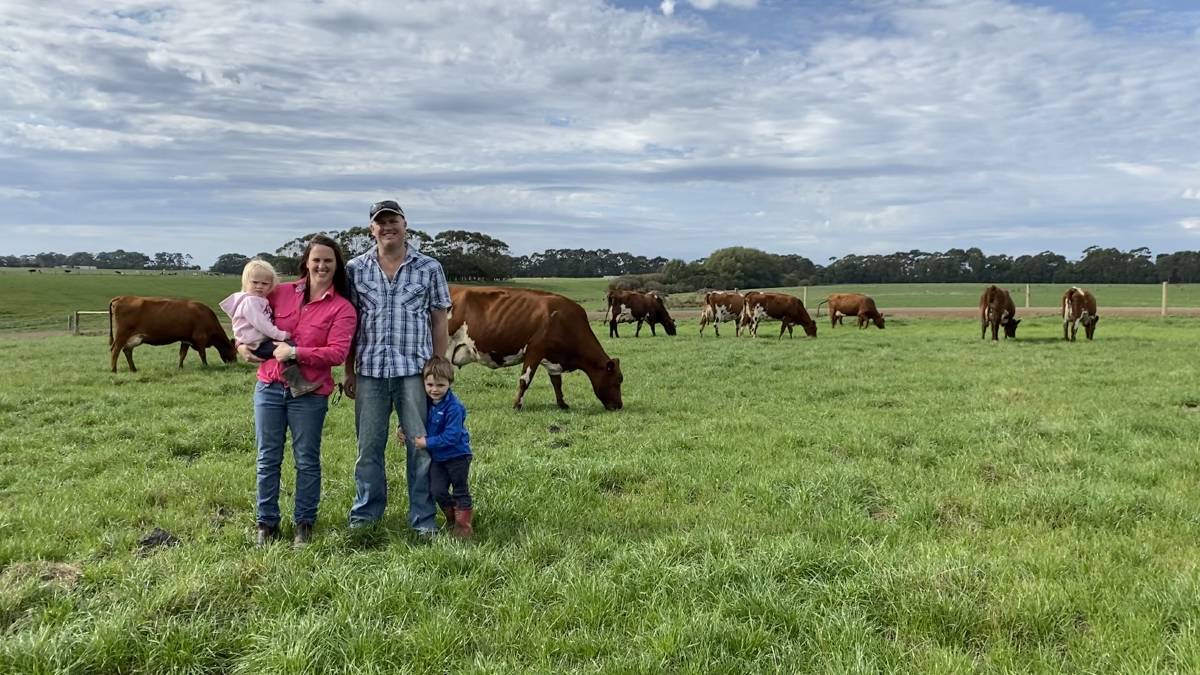 FAMILY: Bronwyn and Brett Davies with their children Kaiah and Levi in front of some of their Aussie Red herd.

The Australian Red Dairy Breed is a major contributor to the crossbreeding sector across the country and is also gaining popularity internationally. But it's rare for these crossbred cows to get the recognition they deserve.

The Australian Red Dairy Breed is a major contributor to the crossbreeding sector across the country and is also gaining popularity internationally. But it's rare for these crossbred cows to get the recognition they deserve.

In pasture-based and seasonal-calving production systems, these Aussie Red sired crossbred cows are often the most profitable in Australian herds with their proven track record for high solids production and high health, fertility and survival.

To recognise these cows, the ARDB recently ran an inaugural Aussie Red-Crossbred Cow of the Year competition on its Facebook page, asking for nominations from its members.

The entries were to be sired by a UU coded bull (this group includes cows sired by Australian Red, Viking Red, Norwegian Red or German Angler bulls) and a first-generation cross from another breed.

The eight nominations can be viewed on the ARDB Facebook page at https://www.facebook.com/ardbxx/.

One of the entries from Brett and Bronwyn Davies of Simpson in south-west Victoria was a typical example of these crossbred cows. TOP CROSSBRED: Barley Dew David Bree is one of the top-performing cows in the Davies herd.

Barley Dew David Bree, sired by RDavid from a Holstein dam, is currently on its fifth lactation and has produced 41,841 litres, 1661 kilograms of fat and 1462kg of protein up until its latest herd test. It last completed 305-day lactation produced 734kg of milk solids.

Calving every year to the first round of artificial insemination, it has never had any health issues and is always among the first 10 cows on the platform.

"She is a classic example of the type of cow that we strive to breed every year and why we love the Aussie Reds," Mr Davies said.

The Davies moved from northern Victoria five-and-a-half years ago with a predominately Holstein herd. They now milk 280 Aussie Red and Aussie Red crossbred cows with only a handful of Holsteins remaining.

They initially tried crossing their Holstein herd with Red in an attempt to improve the health and fertility of the herd, realising that one of the major keys to being profitable was having cows in calf that had few health problems.

This has proven to be a resounding success and the Davies were so impressed with their first Aussie Red crosses that they've now decided to breed their entire herd to Red.

The Davies subsequently became more involved in the Australian Red Dairy Breed, signing up as members about five years ago.

They have thoroughly enjoyed their involvement in the organisation, catching up with like-minded breeders around the country at different times.

They have been involved in industry extension since moving to Simpson, being selected as a WestVic Dairy Focus Farm from 2016 to 2018 and are also a current Ginfo herd with Datagene.

Mr Davies has become a director of the Australian Red Dairy Breed, overseeing the finance and administration of the organisation.