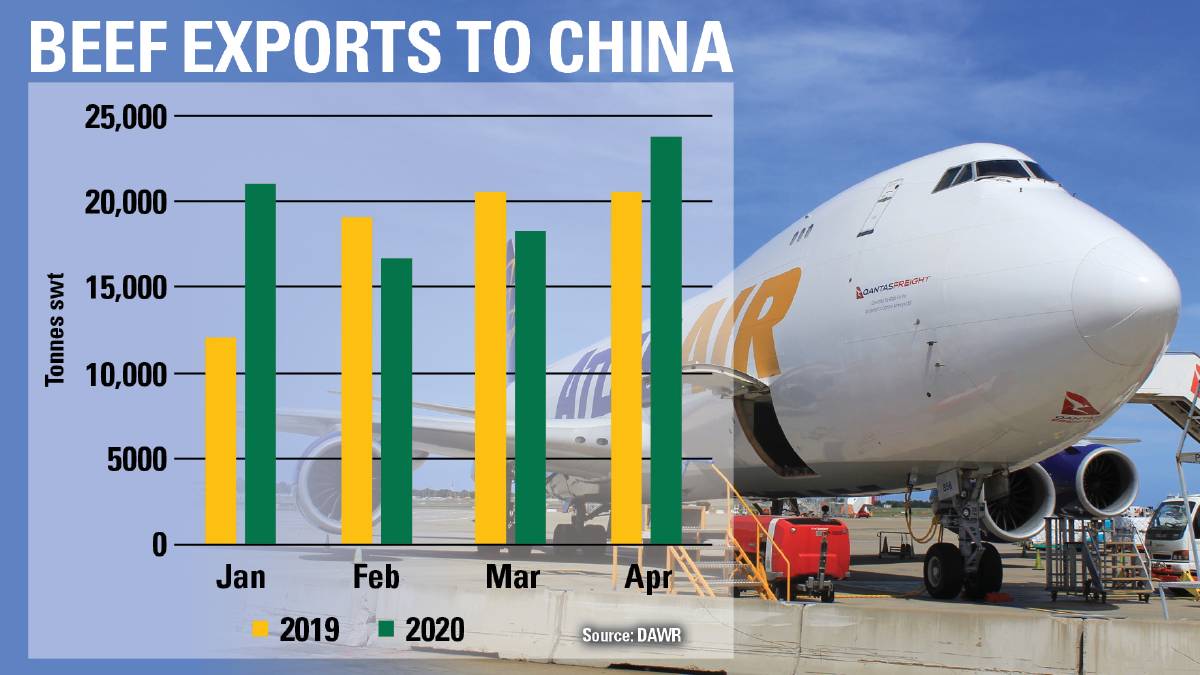 April beef shipments back, but only slightly, despite big US drop.

AS concerns mount over the impact of strained political tensions between China and Australia on trade, the latest red meat export figures have confirmed just how important the market is to beef producers.

Beef exports to China have barely hiccupped through coronavirus, with April figures showing they are up 10.2 per cent year-on-year.

Talk of jammed up ports and massive demand hits is not being reflected. Rather, it is significant animal protein supply gaps in the wake of African swine fever devastation to China's pork production that seems to be exerting the most influence.

Beef exports overall eased only slightly in April, with close to 92,500 tonnes shipped, which was around 2pc back on March and 6.3pc lower year-on-year, the latest Department of Agriculture statistics show.

Year-to-April exports are only back 1.4pc on year-ago levels.

The strong flows into China have not overly surprised analysts and they say it is certainly a good sign for ongoing demand to this large market for the rest of 2020.

"It was China's ability to withstand economic downturn, compared to rest of world, and continue to take our beef that underpinned Australian beef's way through the global financial crisis and it appears to be a similar scenario with COVID," Mecardo's Matt Dalgleish said.

"Cleary, China is moving quickly back towards a trade focus and growth phase."

Japan and Korea have also had a solid start to the year, although the Japan story might not continue given reports this month about the extended spread of the virus and stricter lockdowns.

Japan retained its crown as Australia's single largest export market, taking 23,850t, down on March but above year-ago levels.

Shipments to the United States, however, are a different story, peppered by the disarray COVID-19 is causing the supply chain in Trump territory.

They were down a whopping 28.1pc year-on-year in April.

About 40pc of cattle processing capacity in the US was offline due to closures or chain slowdowns, causing an unprecedented spike in fresh beef prices, he said.

"However, Australia really needs the vast array of fast food burger chains to recover their business to see a marked improvement in Australian shipments to the market," he said.

The somewhat modest fall in overall exports on year-ago levels may be cause for some head-scratching compared to weekly slaughter rates in recent months, Mr Ryan said.

According to MLA's weekly slaughter survey about 170,000, or 7pc, fewer cattle were processed in the eastern states during the first 18 weeks of the year compared to 2019.

However, the cattle that are coming forward are at heavier weights, thanks to a turn-around in seasonal conditions and record numbers on feed at the opening of the year, Mr Ryan pointed out.

"Average carcase weights in February, the latest month available, were 8kgs heavier than 2019, and that's prior to widespread rainfall in key producing regions. Heavier weights are mitigating the impact on production of reduced throughput," he said.

Concern about the global beef demand situation amid coronavirus uncertainty has taken some of the steam out of the cattle market but agents say the latest figures should put a fair bit more wind under the wings of restockers.

Mr Dalgleish said local conditions have meant Australian cattle prices have decoupled from what's happening around the world and while that situation could not last forever, history had shown it could certainly last more than a year.

While it was only small, the decline in April exports reflects the beginning of a widely-anticipated contraction in supply.

"While COVID-19 is causing some supply chain disruption, the current and forecast decline is really being driven by the significant improvement in seasonal conditions in key areas, allowing producers the opportunity to rebuild herds after two years of drought," Mr Ryan said.