Is AWI's WoolQ providing all of the promised benefits to the industry?

When WoolQ was launched in 2018, it was promised to boost the industry by $38 million across 15 years.

When WoolQ was launched in 2018, it was promised to boost the industry by $38 million across 15 years, so is Australian Wool Innovation's online portal on track to deliver $2.53m in benefits each year?

WoolQ, formerly known as the Wool Exchange Portal, was the final product of a three-year wool industry review which recommended the need for an online platform that supported all stages of the wool growing and selling cycle.

AWI chief executive Stuart McCullough said it was too early to say whether the platform was having a significant impact on the wool industry given it was still in its "infancy".

Mr McCullough said WoolQ Market - the selling side of the platform that was advertised to launch in "early 2019" - only just conducted its first sale in April this year.

"We [previously] went through some trial auctions with buyers and brokers last year but we didn't have a lot of interest in it at that time," he said.

"There was some interest in it but not enough to go much further with it. 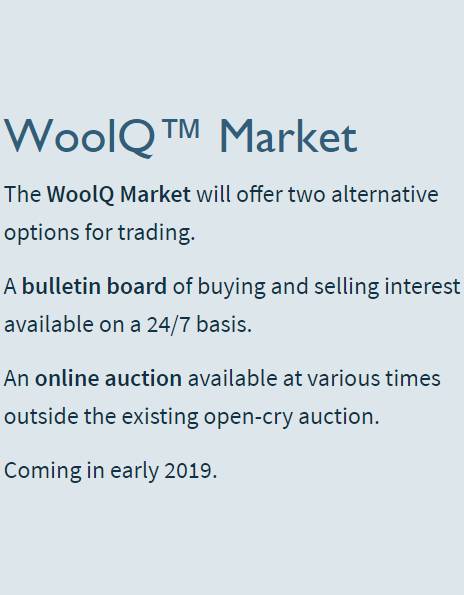 "Then we had the failing of the Talman system and the threatening of open cry auctions by social distancing measures, and it sparked an interest in this and we were able to turn the platform on and have been busy trying to improve the user experience ever since."

When asked whether this meant the system was more so suited to unprecedented times when open cry auctions could not go ahead, he said it was "counterintuitive" to think so.

"You can sell pretty much any commodity online so why would wool be unique to that?" he said.

"And that was the reason behind building WoolQ; we wanted clean, digital data coming off the farm, efficiencies in the shearing sheds and more competitive tension on the bidding of wool."

He believed it was a sound investment that was "built and ready for the future".

But some in the industry are highly critical of the platform that cost over $4 million to produce, including United Wool director Nigel Rendell, who said it was a mystery why the platform was created.

"The industry has had successful electronic selling platforms for decades; to duplicate yet another platform is completely unnecessary," Mr Rendell said.

He was unsure in what capacity AWI thought it would benefit the industry by so many millions of dollars every year.

"How the conclusion of this monetary figure was reached is farcical," he said.

He said there were many programs that AWI supported that were "fabulous", but to "duplicate another glorified selling system at the expense of the Australian wool grower was a mistake".

"Particularly when growers already have excess options for selling," he said.

"The way we sell wool has never been an issue; the way we market it is."

A wool grower and classer from NSW who wished to remain anonymous said it was obvious from the get go that the software had some problems.

And he said two years later, it appeared there were still some "teething problems".

"I used it in a couple of small sheds but had some problems with the clumsiness of it," he said.

"Usually I can document a 20-bale wool clip in 10 minutes but using the electronic version took substantially longer."

He said the benefit of WoolQ was that it stopped any bales going missing or being duplicated, which was often the "biggest gripe" of classers and brokers.

And he said he could see real benefits in using the platform on big, 100-plus clips, but for smaller clips, "paper is sufficient".

But he was frustrated that there had been no collaboration between AWI and Australian Wool Exchange (AWEX) when it came to developing an electronic wool specification when AWEX already had one developed - WoolClip.

"So there should have been close collaboration between the two to develop an electronic version; the industry doesn't need everybody doing their own thing."

He said the industry needed something that was uncomplicated.

"There are a lot of people that are happy with the way things are now," he said.

"We definitely need to modernise things but it has to stay user friendly."

And he said AWI needed to guarantee the security of all of the personal data uploaded onto the system, particularly in a time where animal activists had the ability to hack into systems and access addresses, mulesing status and bank details of farmers.

Mr McCullough acknowledged that there were other platforms out there similar to WoolQ but said he hoped up and coming wool classers and brokers exposed themselves to all of them.

"Because there's every chance they'll walk into a shearing shed [to class a clip] and the wool grower will want them to use WoolQ," he said.

Currently 2500 people have registered to use WoolQ and he said that number could always be higher.

"I think that number's okay but we're spending a lot of time and energy on getting more," he said.

"We want liquidity, so the more on it the better."