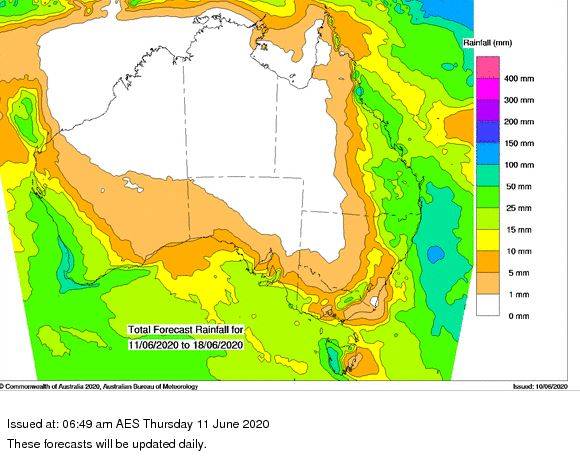 The BOM's eight day forecast is a glorious view for farmers looking for rain in Queensland and south-western WA.

There's the chance of solid rainfall in Queensland and WA over the next eight days which will be a big boost to national crop prospects.

THE AUSTRALIAN Bureau of Agricultural and Resources Economics and Sciences (ABARES) crop forecast raised some eyebrows with the normally staid forecaster coming up with a winter crop estimate of 44.5 million tonnes and a wheat number of 26.6mt.

If realised, this would be the fourth biggest wheat year on record, with other analysts suggesting it was a high estimate for this time of the year, especially from a forecaster normally known for being conservative.

However, the likelihood of such tonnages could take a turn for the better should the seven day weather outlook come to pass.

Promising rain is forecast across southern Queensland and much of Western Australia, the two areas struggling with moisture deficits in recent months.

The rain is expected to hit Queensland on the weekend and south-western WA in the middle of next week.

Just two days out the Queensland rain is looking especially promising, with much of the Darling Downs forecast by multiple models to receive between 35 and 50mm.

Across the border in northern NSW the falls are expected to be slightly less but still a healthy 25mm average.

The main rain in Western Australia is not expected until the middle of next week meaning there is still uncertainty surrounding exact locations and amounts, however there could be good falls of over 25mm near the coast and 15-25mm through the wheatbelt proper.

Over the last couple of days coastal areas in Western Australia's wettest region over winter, the far south-west, received over 50mm in parts and a widespread 25mm.

However most are looking to see how much rain falls in the inland wheatbelt and through the Esperance port zone which has been unusually dry.

Elsewhere, there is the chance of useful, but not overly substantial in southern areas and near the Great Dividing Range in NSW.

Despite of the Indian Ocean Dipole (IOD) briefly foraying into positive territory, bad for rainfall in Australia, the BOM reported four out of six models predicted an IOD negative to form from midwinter onwards.

In the Pacific Ocean the forecasts are still generally neutral, however there has been cooling in critical tropical waters, correlated with an La Nia event and the BOM said further cooling in that area may mean it would switch its official ENSO outlook from inactive to a La Nia watch.

A La Nia favours wetter than average conditions in Australia.