Marking 100 years of the Nationals: In part 1 of this special report, we look the long history of the Nationals, who have at times wielded extraordinary power in shaping Australia. 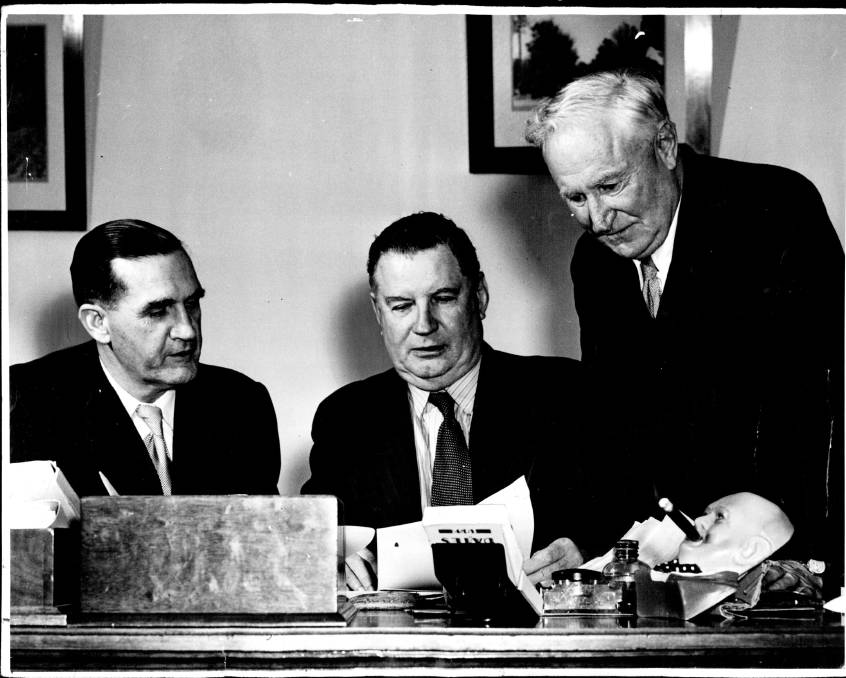 For a "rural rump" party, the Nationals have produced a parade of giant political characters who have wielded major clout in Canberra.

Nationals' leaders have exercised power beyond the party's small parliamentary numbers during the past 100 years through coalition governments with the much bigger Liberal Party and its predecessors.

It's often been a case of the tail wagging the dog with Nationals twice putting the kybosh on the Liberals' choice of leaders.

The National Party was born from the determination of battling small farmers (so-called "cockies") to create a specialist rural party to represent their interests against union-dominated Labor and city-centric Liberals.

Through their state farming organisations they agitated during the early 1900s for the founding of a party to tackle issues important to them such as the need for government intervention to kick middlemen (the "greedy merchants") out of wheat marketing. 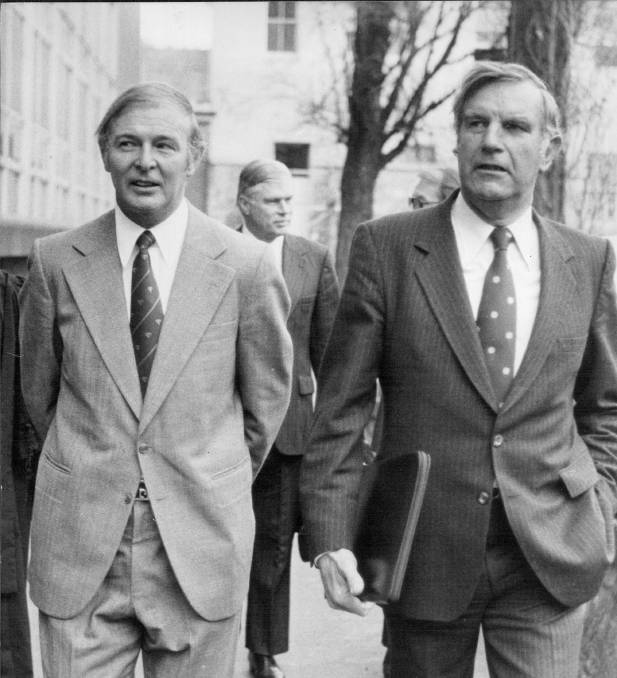 TWO BIG GUNS: Two giants of the National Party of Australia, Doug Anthony and Ian Sinclair, were part of the "Mulga Mafia" during Malcolm Fraser's time as Prime Minister.

Members of the WA Farmers and Settlers Association struck first by forming the Country Party of WA in 1913.

The Victorian Farmers Union established a political party in 1916. Country parties followed in Queensland and South Australia in 1918 and NSW in 1919 (originally called The Progressive Party).

Their early successes in state elections led to the formation of a federal Country Party on January 22, 1920, by a group of nine successful candidates in the 1919 federal elections who had been backed by state farming organisations.

Among that group was the party's first giant of national politics, Sir Earle Page, a doctor and businessman from Grafton on the NSW North Coast.

He was elected as the member for Cowper and represented the seat until December, 1961.

During his marathon 42-year career Page became the party's longest-serving leader and its first Prime Minister.

While all three were short-term Prime Ministers they played major roles in federal politics.

Only Sir Arthur Fadden, raised at Walkerston near Mackay in north Queensland, rivalled him for longevity by leading the party March 1941 to February 1958. 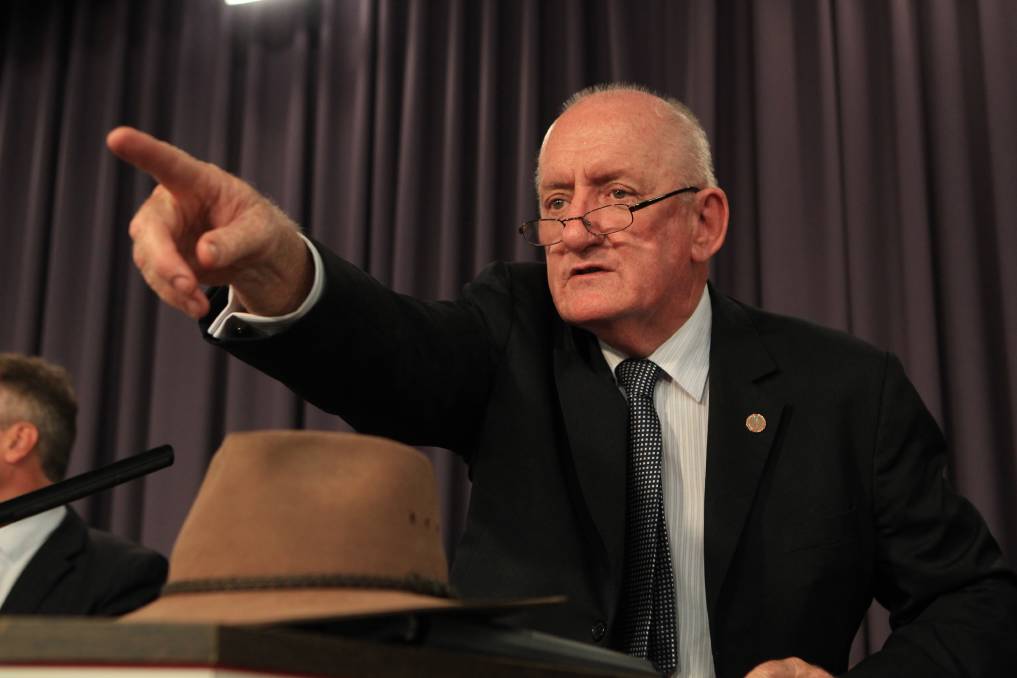 TWO MINUTE TIM: Initially ridiculed as a hayseed by some in the national press gallery, Tim Fischer went on to lead the National Party and become widely respected.

After the 1922 elections the Nationalists led by the colourful Billy Hughes failed to gain a majority and sought a coalition with the fledgling Country Party.

Page was no fan of Hughes and agreed to a coalition only if he stepped down.

Hughes was replaced by Stanley Bruce and then Page demanded five seats in a 11-member Cabinet including the Treasurer portfolio for himself.

Page was effectively Deputy Prime Minister even though the title didn't officially exist until 1968 after a deal between then PM, John Gorton, and Country Party leader, Sir John McEwen.

The Bruce government was smashed by Labor in 1929 but Page returned to the Treasury benches in 1934 as Commerce Minister when the Country Party formed a coalition with the United Australia Party (UAP) led by Joseph Lyons.

Lyons died suddenly in 1939 and Page became caretaker Prime Minister for 20 days before Robert Menzies was elected the new leader.

Page refused to serve under Menzies and after accusing him of incompetence and cowardice for not serving in the First World War he lost the party leadership to Archie Cameron, a SA farmer. Cameron held the reins for a year before being replaced by Sir Arthur Fadden.

Fadden led the Opposition for two more years before resigning in favour of Menzies after a poor showing at the 1943 elections.

Menzies, now leader of the new Liberal Party, became PM again 1949. He appointed Fadden Treasurer for the second time and he kept that office until he retired in 1958.

Page and Fadden were replaced in the spotlight by Sir John McEwen, the Country Party's third Prime Minister, who held the office from December 19, 1967, to January 10, 1968, after the disappearance of Harold Holt.

The Victorian soldier settler from Stanhope was elected in 1934 and was party leader from 1958 to 1971.

Dubbed "Black Jack", McEwen was appointed Commerce and Agriculture Minister after the Coalition's victory in 1949 before switching to Trade in 1956.

He pursued a policy which became known as "McEwenism" where tariff walls protected local manufacturing while farmers received subsidies as compensation.

Although popular in the 1960s, "McEwenism" has now largely been dismantled in favour of free trade.

McEwen announced he would not serve under William McMahon, a free trade advocate, if he was elected Liberal leader to replace Holt. McMahon withdrew and John Gorton was elected PM.

A dairy farmer from Murwillumbah on the NSW North Coast, he was elected the member for Richmond in 1957.

He was Minister for the Interior from 1964 to 1967 when he was appointed Minister for Primary Industry where he was confronted with a wheat price crisis which resulted in controversial quotas to limit production.

Anthony fell out with McMahon before the 1972 election which was won by Labor under Gough Whitlam.

In Opposition Anthony changed the party's name to the National Country Party and started contesting urban seats in Queensland and WA.

Its name was changed again to National Party of Australia in 1982 to better reflect the party's move to widen its appeal to all bush voters.

The tumult of the Whitlam era ended in 1975 with a landslide to the Malcolm Fraser-led Coalition.

Anthony resumed his Deputy Prime Ministerial and trade portfolio duties. He and Fraser were close and with colleagues, Ian Sinclair and Peter Nixon, formed what would become widely known as the "Mulga Mafia".

Ian Sinclair replaced Anthony as party leader, holding the job until 1989 when he was ousted in a coup by Charles Blunt.

Blunt wanted to modernise the party and was a strong supporter of economic deregulation.

Sinclair had to deal with the messy Joh for Canberra in the lead-up to the 1987 elections.

The push to elevate Queensland's long-serving National Party Premier, Joh Bjelke-Petersen, quickly collapsed but not before it split the federal Coalition and handed the election to Bob Hawke.

Tim Fischer, a lanky and quirky farmer from Boree Creek in southern NSW, led the Nats from 1990 to 1999 and was Deputy Prime Minister and Trade Minister in the Howard Government from 1996-1999.

Wounded during the Vietnam War, Fischer was portrayed as a hayseed early in his career by the city media because of his sometimes muddled English but he went on to become one of Australia's best-loved politicians.

His support of Howard's sweeping gun control after the Port Arthur massacre in 1996 wasn't popular in his rural base. 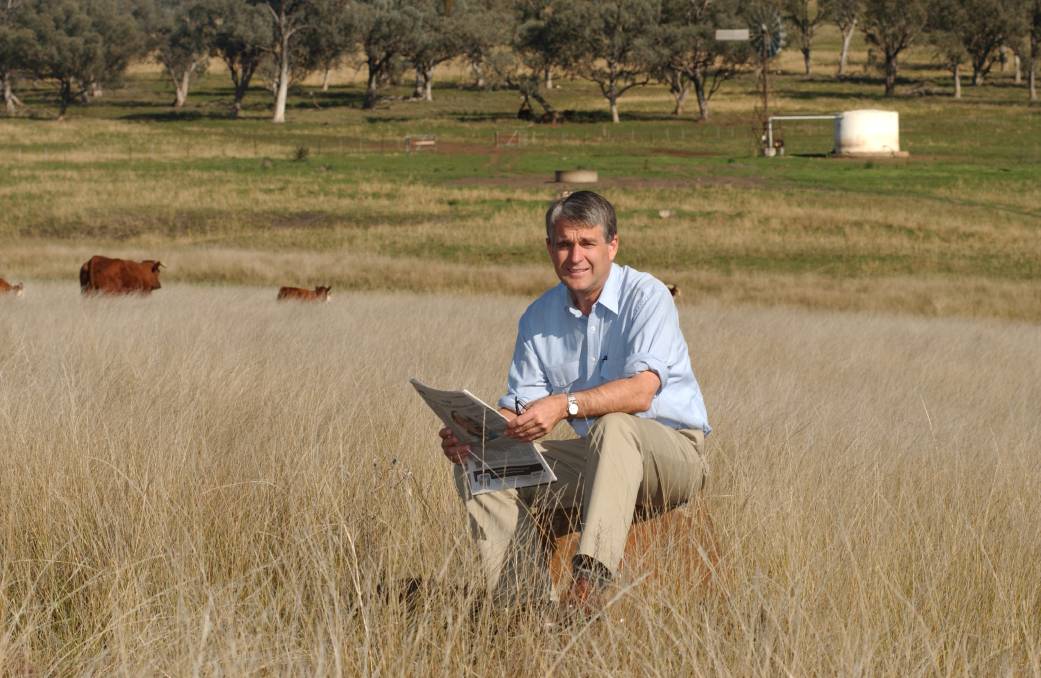 DOWN ON THE FARM: Nationals' leader, John Anderson, on the family farm at Mullaley in north west NSW. He was probably happier on the farm than in Canberra.

Fischer also had to contend with the free-market reforms being driven by new Treasurer Peter Costello and the anxiety in the bush about the Mabo and Wik decisions on the future of land title.

Perhaps his biggest challenge was responding to the rise of One Nation, a right-wing populist party led by Pauline Hanson.

Fischer was replaced by north west NSW farmer, John Anderson, who was Deputy Prime Minister and leader of the party from 1999 to 2005.

Anderson had to fight to reverse his party's dwindling voter base against the rise of rural independents and a Liberal Party hellbent on privatising Telstra which wasn't popular in the bush.

He was followed by steady leaders in NSW Mid-North Coast stock agent, Mark Vaile, and Queensland farmer, Warren Truss, before Barnaby Joyce took the helm for two hectic years from 2016 when he was replaced by Michael McCormack.

Coming tomorrow, parts two and three of this special report, which dive into how the modern Nationals differ from their Country Party predecessors and if they party can remain relevant in a crowded political landscape.

Sponsored by
The GippsDairy Yanakie Focus Farm wrapped up in December - and demonstrated how planning can help farm families achieve business goals.
Test
Lamb yarding levels are surging with NSW leading the way, but prices remain strong.
Test
NFF argues vegan labels are misleading consumers
Test
The well-known 20ha bull farm at Bacchus Marsh in Victoria has sold for $3 million.
Test
Many Australians are surprised to learn camels are in plague numbers across outback Australia.
Test
Lift in offshore demand sees sheep skin prices pushing towards record highs.
Test
A2 Milk Company pushes ahead with a top end business restructure after being savaged by a sales slump and share price collapse.
Test
Urea prices are likely to remain high and supply tight as demand for product continues in light of strong crop prospects.
Test