Meeting market specifications and providing a consistent product has allowed the Campbell family of Woodlands at Merriwa to stand out in the MSA world.

MEETING market specifications and providing a consistent product has allowed the Campbell family of Woodlands at Merriwa to stand out in the MSA world.

Operating a mixed farming enterprise across 2590 hectares (6400 acres), the Campbell's family farm is operated by Peter Campbell and his wife Wendy, his parents, Ron and Betty, and brother and sister-in-law, Mark and Karen Campbell.

In 1995, they made the move from Hereford cattle into Angus after seeing the greater market acceptance and demand for black cattle.

Originally on Waverley blood, they have since introduced Te Mania genetics, as well as US bloodlines through a small artificial insemination program.

Running around 220 breeders, the Campbells are focused on getting as many calves on the ground as possible following the drought to rebuild numbers.

"With the price of cattle at the moment we aren't able to purchase, so we are focused on breeding as many calves as we can ... we will have a split calving this year, 120 spring calves and 100 late autumn calves," Peter said. Selling direct to Woolworths, they focus on getting stock to the 520 to 550 kilogram mark, with 10 to 12 millimetres of fat. Photo: supplied

The cattle run alongside 2500 ewes, and 1000 lambs that are on feed and contracted to go in June and July.

Aiming to breed soft cattle in a moderate to larger framed package, that will open them up to a larger market, Peter said they continue to monitor frame, milk and temperament.

"We focus on growth rates (400- and 600-day weights) and fats ... to get something to eat well, they have to have reasonable fat cover," Peter said.

"We use EBVs (estimated breeding values), but you have to appraise the phenotype - you can't look at one without the other.

"Temperament is important especially to MSA as it effects pH and eating quality."

It saw them win the 2019 MSA Excellence in Eating Quality Award for most outstanding MSA producer, band one in NSW.

Peter said the high performance of their stock is not attributable to rocket science, but rather just continually making sure they are doing right by the animal and their business. 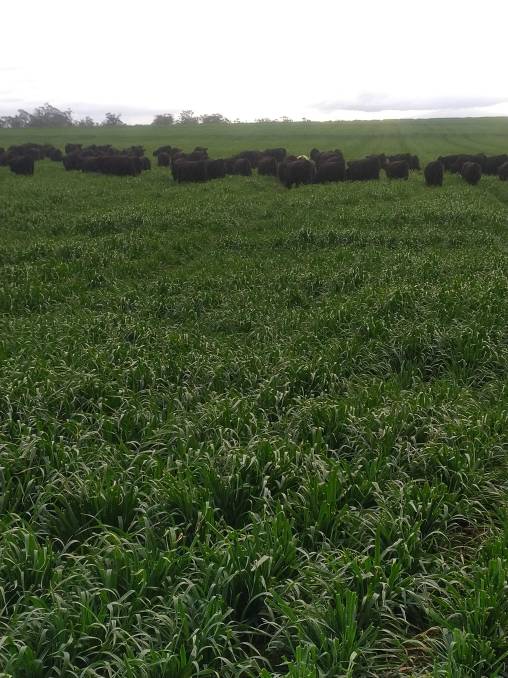 Under normal circumstances the Campbells finish their cattle in oat paddocks with grain bins, however with the drought they haven't had the capcity to do so. Photo: supplied

"We use feedback and data to make sure we are continually meeting the market in terms of meat colour, fat cover, pH, MSA Index, and weights, while ensuring we are feeding right and supplying shade and water," he said.

"We handle them appropriately before they are sent off and while loading ... it all augers into how well stock perform for you in the MSA system."

The Campbells first became involved in the MSA program over 20 years ago, after looking for an option to move away from the fluctuating saleyard system.

"We wanted to move away from the saleyard system, and go into direct selling where we were marketing our particular beef product to an outlet, which would then allow us to be able to produce finished stock in large numbers, and obtain feedback," Ron Campbell said.

They have since been selling direct to Woolworths, and focus on getting stock to the 520 to 550 kilogram mark, with 10 to 12 millimetres of fat.

Peter said under normal circumstances they finish their cattle in oat paddocks with grain bins, however with the drought they haven't had the capcity to do so.

"They are running in a feedlot/drought lot situation and we mix our own feed, that we try and grow all on-farm," he said.

"When the feedlot is full, we were feeding 5.5 tonne per day, so under normal circumstances with them running in paddocks it helps reduce the volume of grain being fed."