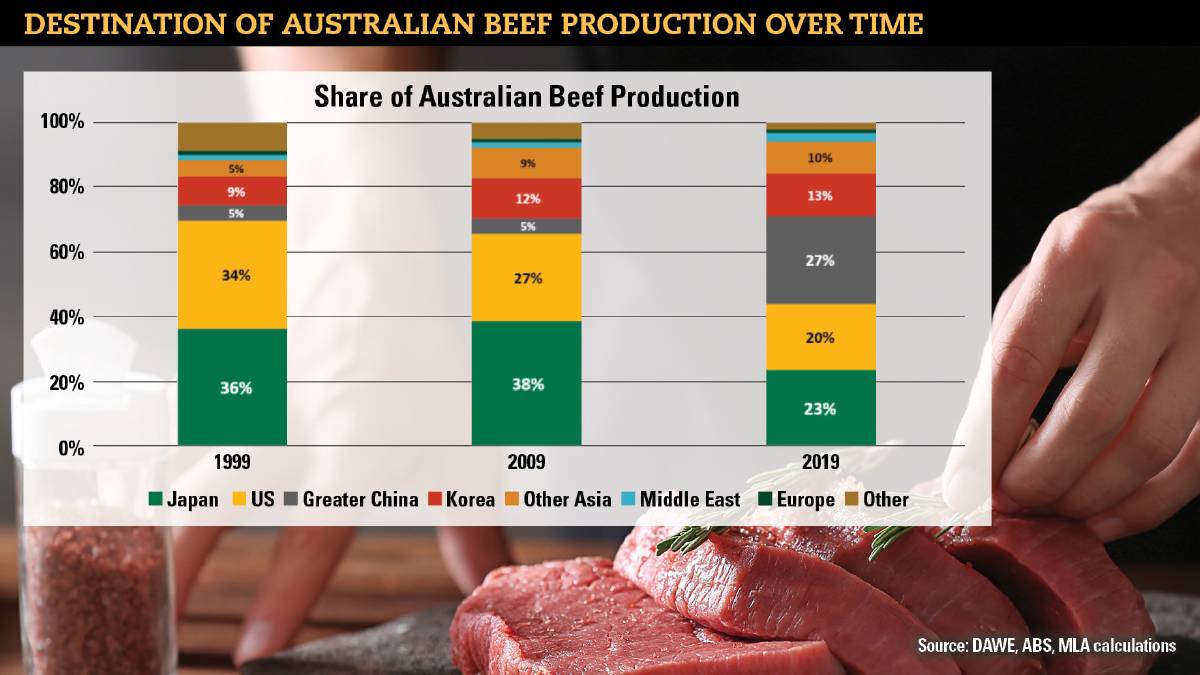 DECADES of effort poured into diversifying beef's markets has come into its own this year, as pandemic woes and geopolitical tensions are ridden out with minimal disruptions to export volumes and values.

Beef marketing experts and industry leaders say Australia's market mix is today secure and has provided a safeguard to profitability that has proven invaluable this year.

Australia has more than a hundred different markets on its beef customer list.

Meat & Livestock Australia managing director Jason Strong said the ability of exporters to divert product quickly to different markets as coronavirus shutdowns swept throughout the world has been a built-in safety net for profitability along the supply chain.

So too the ability to find alternatives when plants were shut out of China last month on technical issues.

Mr Strong said Australia had diversified not just geographically but for most of the products it produces.

"Many of our markets take a primary product and then supplement with others," he said.

"Making all of our customers aware of the wide range of beef products we offer has been a strong focus and that is paying off."

The work put into building relationships with multiple channels within markets, such as food service and retail, was also paying dividends, he said.

"A market like the United States, for example, which has historically been a trimmings market, has in the past five to ten years grown as a grassfed cuts market, a Wagyu market and a grainfed market as well," Mr Strong said.

At the same time, Australia now has other markets, such as Indonesia, taking good volumes of trimmings which provides back-up should the US trimmings market drop away significantly.

The diversification path was a natural maturity, a progression in the way the beef industry approached the development of international markets, Mr Strong said.

"But it also came about due to the maturing of the markets themselves - Korea, for example, was originally a frozen quarter beef market but we now talk about it in the same breath as Japan," he said.

Veteran meat exporter Richard Rains, former head of Sanger Australia and a member of numerous beef industry boards and committees since, said the push to diversify existed in Australia from day one.

"From the day we had ability to export meat, it was recognised we needed as many markets as possible," he said.

"When containerisation came along, it afforded us the opportunity to go anywhere in world with smaller volumes.

"We have always had very expensive processing in this country, which means our workers are well paid but it has also meant we've had to develop a premium product that was seen as such in many markets. We've had to command a higher price."

Mr Rains believes the fact Australian beef production has remained disease-free has been key to its ability to continually access premium markets and capitalise on its competitors being locked out at various times.

He was heavily involved in the move into South Korea in the 1970s and led deals to supply North American McDonald's restaurants in 2001 - which today arguably remains Australia's single largest customer.

Both those developments were pivotal moments that launched Australian beef into new eras.

"I'm a fan of producing cattle that are right for the area they are being raised in and then finding the right market for the product," he said.

"It's always up to export businesses to sell to the best markets on the planet at that particularly time.

"But we're fortunate enough in Australia to be able to produce beef that suits all palates."

In recent years, Australia had demonstrated its ability to quickly divert beef sales whenever there had been a hiccup in one market, he said.

The industry should take confidence from the foundations that provides.

"There is a lot of talk about China at the moment and calls for Australia to bring manufacturing back home," he said.

"I don't subscribe. The fact so much of the worlds' manufacturing went to China changed the lives of many Chinese and as they were raised out of poverty and progressed up the socio economic path, they wanted to eat our beef and drink our wine, which has afforded us enormous marketing advantages," he said.