The way the market is heading, it will end up being quite a remarkable year for prices.

Another week and the decline in Chicago Board of Trade futures continues. As we suggested last week, the next target to the downside would be 468 US cents a bushel on the July contract, and that was hit in trade on Friday night last week.

With the July contract nearing expiry, the nearby contract has moved to September, where 475 USc/bu was the next downside target. Having now hit that point the next target becomes 460 USc/bu, which is the September low from last year on the long term continuous chart.

Wheat fell victim to ongoing selling in corn at the end of last week. In fact, the funds are holding near record sold positions in the corn market, so selling shifted over to wheat where more general grain shorts could be put in place with a lower risk than continuing to simply sell corn.

We are also seeing a traditional harvest pressure influence come into United States wheat futures. The early part of the harvest has cleared out the lower yielding and more drought prone regions of the US southern plains. Harvest is moving further north and quality, including protein levels, is improving. 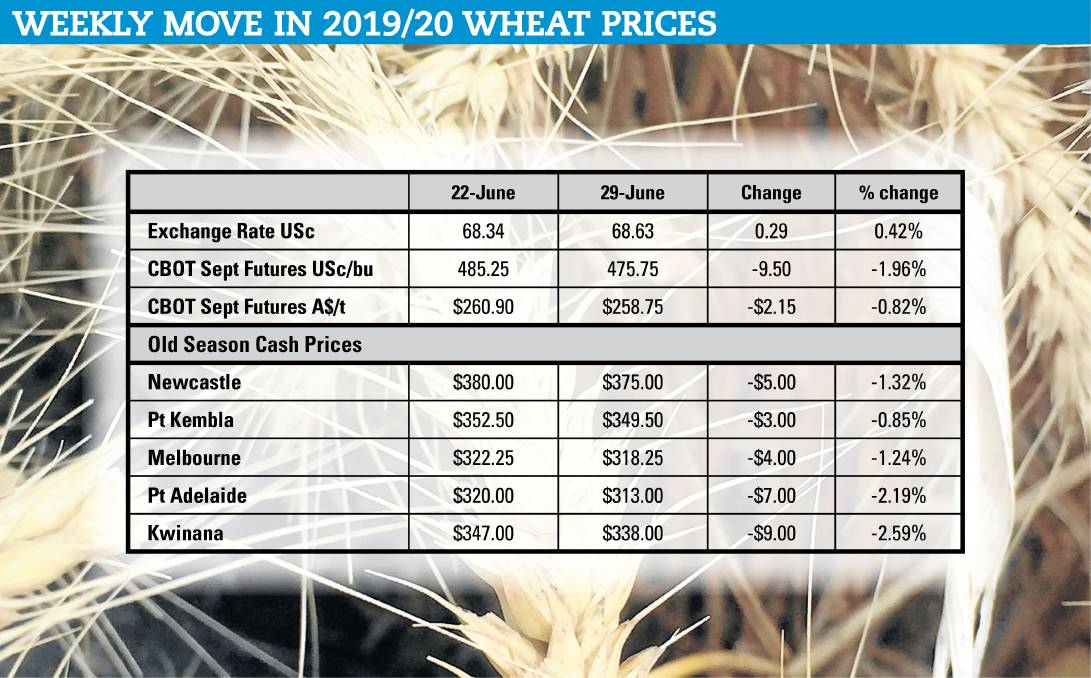 We are also starting to see harvest pressure coming from Europe, along with better seasonal conditions to finish off some of their crops.

The way the market is heading, it will end up being quite a remarkable year for prices. One where despite multiple seasonal issues across all growing regions from North America, to mainland Europe (and the UK) and into the Black Sea, the global crop will make a new record, and where the market has been able to shake off the bad news.

In some respects it is nice to be back like the old days, where CBOT future peaked in our autumn (anytime from the end of January to the end of April), and then predictably fell into the mid-year period under northern hemisphere harvest pressure.

We would often get a triple bottom, often starting in late May, revisiting in late June and having a final test in late July. Then we would have the predictable rally into our harvest period.

My best bet will be for a recovery in prices into the end of the year. At current $A values of $A255 a tonne, too many of the world's wheat producers have become unprofitable, none more so than in the US. It's not going to be that lucrative in Australia at average yields either.