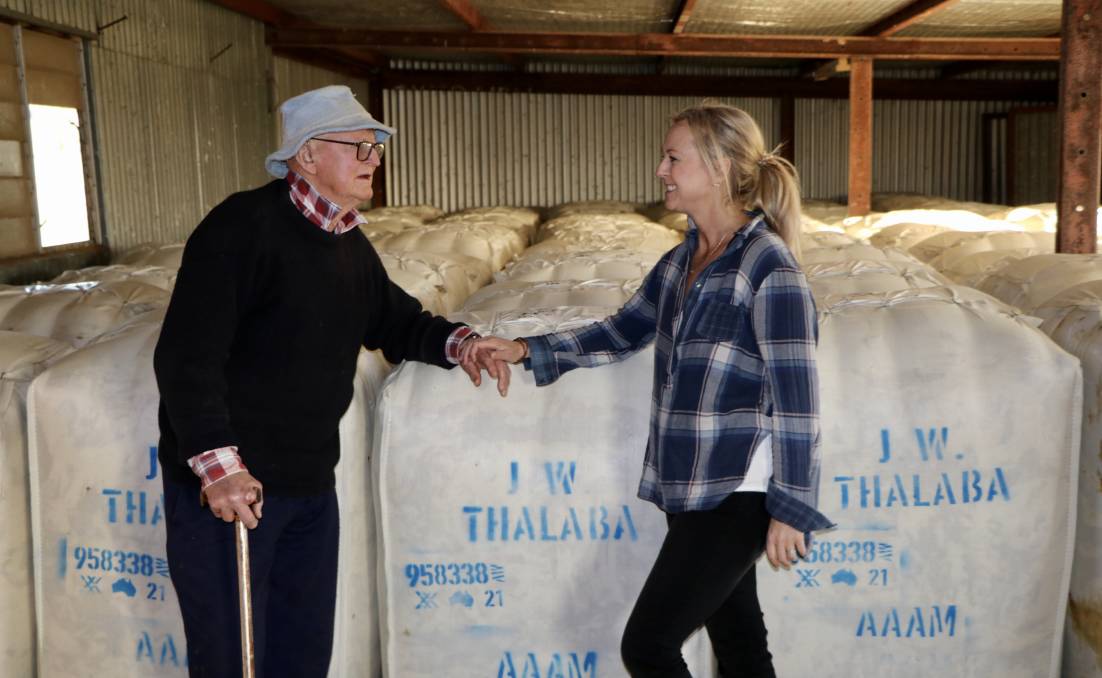 John Williams with his daughter Kristen Frost. She said carrying on his legacy feels natural. In recent years top-shelf genetics have been added to the sire battery. Photo by Ally Jaffrey.

A new generation at Thalabah Merinos are keen to take the stud into the future.

As the frost disintegrates and the fog lifts on a property in the Southern Tablelands of NSW, the silhouette of a man tainted with age can be seen in a paddock full of Merino rams.

He's getting them quiet. He's picking out his favourites. And he is preparing for the future.

John Williams turned 86 this year, some may say that is time for retirement, but for him, it's time to make sure things are rolling along for the next generation.

Under his guidance, a team of middle age adults and their children are following in his footsteps.

"His passion rubs off on you," said his daughter, Kristen Frost.

"He loves the Merino and he is talented at what he does.

"In all honesty, it is hard to get a lot out of him, but if you spend enough time with him, he lets little things out of the bag, one at a time. You can't help but want to carry on his legacy."

Thalabah Merino stud was first registered in 1992. But it's history goes way beyond that.

Prior to then, John, with his wife Marion, led the field in the medium wool stud industry for many years with the highly successful Koonwarra Merino stud. It was sold to interests at Canowindra in 1998.

In the early 2000's, under the persuasion

of family and friends, the stud was reinvented, using the original property name with an addition of a 'h' at the end.

Over the years rams from Glendonald, Billa Burra Burra and Roseville Park, Greenland and Grassy Creek were introduced into the sire battery.

A major stud ewe program that was started six years ago under the guidance of classer Rick Power is flowing through the flock.

In 2018 Thalabah purchased a ram from from Greenfields stud in South Australia. The near perfectly structured ram with a bold crimping wool was an eye catcher, but more importantly, so far his progeny have clicked well with the Thalabah ewes.

Also in 2018, Thalabah registered its Poll Merino stud with founding sires from Jolly Jumbuck and Greenlands. Kristen Frost with her daughter, Sadie. She said her father's passion rubs off on her.

Last year a big framed Glendonald ram was purchased at Hamilton sale and at Dubbo National Sale they secured a Poll ram from Alfoxton stud for $16,000 - a half bother to the 2019 Australian Merino of the Year.

A small AI and ET program has also been reintroduced using selected sires as well as purchasing semen from Langdene stud.

But there is one stud that has always influenced Thalabah, and in the earlier days, Koonwarra.

"All my life through my stud breeding, we have had a big infusion of Merryville bloodlines," said Mr Williams.

"I have tried to maintain it through our breeding program through all of those years, and it is still here."

One aim remains clear - to retain the Thalabah type that they are known for - sheep that are well structured, well covered with a high yielding wool and good fertility. A sheep that will not only withstand a harsh climate, but will thrive in all areas.

"We aim to build a very sound sheep with good structure without compromising the wool quality or the wool cut," Mrs Frost said.

"The last three purchases of sires are sheep that are going to help not only sustain our aims, but build the flock."

Over the years, Thalabah clients who have entered their maiden ewes in the local flock ewe competitions have been rewarded, winning both the Crookwell and Taralga competitions and also taking out the Southern Tablelands Championship.

This year's finalist Chris Croker of Ayrston, referring to his flock said, "I think I have turned the corner. And I don't think it is just me, it's Thalabah as well."