The Pietsch family, The Run, Bordertown, SA, started buying rams from the Lawral Park Prime SAMM stud about two years ago and continue to be pleased with their performance.

The SAMM sheep breed is the backbone of the Pietsch family's mixed farming operation at Bordertown in South Australia, producing quality ewes for prime lamb production.

This is advertiser content for Lawral Park Prime SAMM stud.

Trevor and Kath Pietsch, and their sons Tom and Nathan, started using SAMMs in 2006 and continue to be pleased with the breed's carcase quality, growth rates and fertility.

"The SAMMs really are the starting point of the sheep operation," Mr Pietsch said.

"I think you are either growing wool or you are growing meat and our main focus is prime lamb.

"We are only 10 kilometres from one of JBS Australia's processing plants so it makes sense to target that market.

"We are getting our straight SAMM and Border Leicester/SAMM-cross wether lambs up to good saleable weights quickly and they are performing very well over the hooks.

The Pietsch family started buying rams from Campbell Lawrie's Lawral Park Prime SAMM stud at Ungarra, SA, about two years ago to increase the genetic diversity of their flock.

They plan on attending Lawral Park's annual on-property sale this year, which is on Monday, August 10.

"Lawral Park genetics were introduced to improve the carcase quality and consistency of our sheep," Mr Pietsch said.

"Campbell has a good selection of genetics and different sire lines on offer and we've been impressed with the evenness of the rams he presents."

Mr Pietsch uses a combination of visual and objective measurements for his ram selection, with an emphasis on growth, including weaning weight and post weaning weight, and carcase traits such as eye muscle depth and fat depth.

"Structural soundness, including feet and legs, is also important and I like a smooth shoulder for ease of lambing." 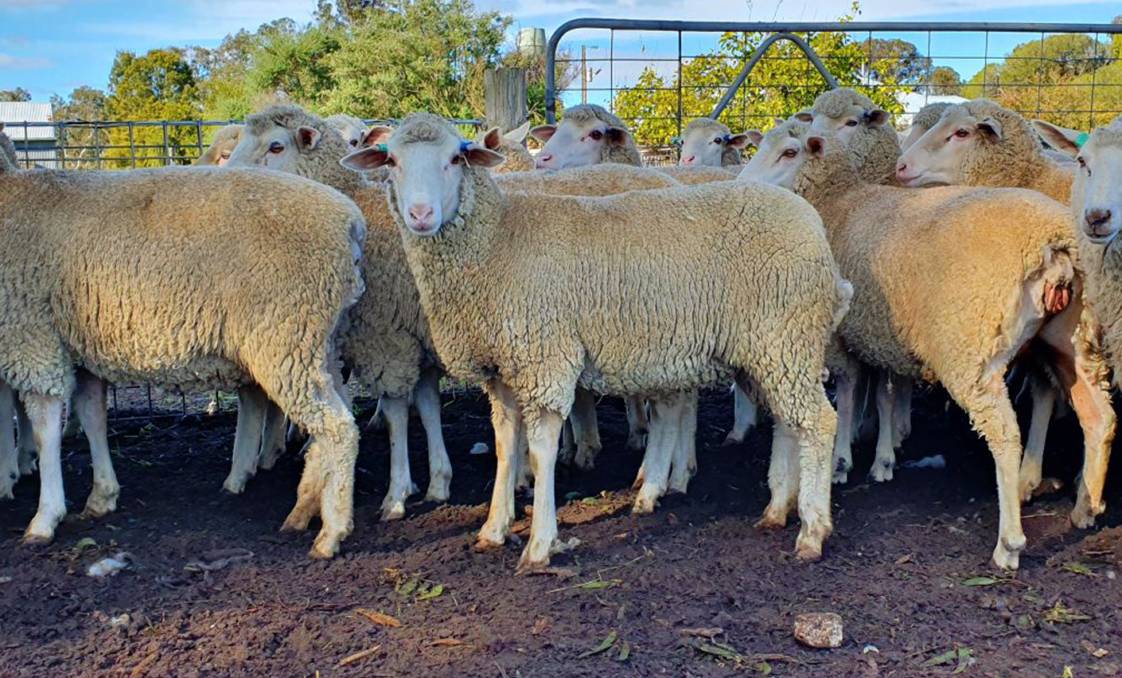 Some of the Pietsch family's joined Lawral Park-blood SAMM ewe lambs at Bordertown.

The SAMM ewes are joined for eight weeks at the end of November to start lambing at the end of April achieving lambing percentages of 120 to 130 per cent.

"We have always been focused on fertility as lambing percentages are a key driver of your profit and we've been pleased with the performance of the SAMM ewes," Mr Pietsch said.

The ewes and rams are flushed on quality lucerne pastures in the lead-up to joining and will also receive lupins two weeks prior to give them a boost.

After grazing the stubbles through summer, the flock goes into containment paddocks and is fed a mixed ration of hay and grain ad lib from on-farm fodder reserves, before being moved out to pasture at the point of lambing.

"The SAMM ewe is an easy-care, low maintenance sheep and they actually seem to prefer more roughage in their diet rather than a rich pasture.

"When we first got them in 2006 it was a drier year and we were impressed how well they did on dry feed, they maintain their body weight and it's easy to get them back up to a mateable weight."

Ewes are scanned and separated into single and twin-bearing mobs so the ewes carrying twins can be given preferential treatment. They will lamb in small mob sizes on better quality pasture.

Mr Pietsch has also started joining ewe lambs at nine to 10 months of age which he admits has been a bit of trial and error but the results have been encouraging.

"We have also changed the mating to one month later in February for a July lambing this year which will increase the maturity of the ewe lambs and there will also be green feed for them at lambing."

The SAMM and SAMM/Border Leicester-cross lambs from the adult ewes are all weaned at the end of July with the wether lamb portion marketed directly in the spring to JBS Australia.

"The aim is to get them up to a good saleable export weight, I don't sell anything under 48kg liveweight," Mr Pietsch said.

"Usually the first draft is gone at the end of September through to early November, depending on the market and available pricing.

"The SAMMs have performed well over the hooks, what we are finding is that their feed conversion in spring and in a feedlot situation is very good.

"When required we have put them on feed and work on a weight gain of about 300 grams per head per day and once you get them going they'll do even better than that.

"Any lambs we don't turn off in the spring, including the progeny from the ewe lambs, is carried through on bean stubbles and sold in January and February at a 56 to 58kg average live weight."

Ewe lamb selection is focused on conformation and carcase shape with a smooth shoulder and a clean breech.

"We haven't mulesed any sheep for nearly 30 years here, and with the SAMMs there is no need which is another attribute of the breed."

The Lawral Park Prime SAMM stud will offer 85 rams at their annual on-property sale on Monday, August 10, at Ungarra.

For more information contact Campbell Lawrie on 0427 060 381 or email lawralpark@gmail.com.

This is advertiser content for Lawral Park Prime SAMM stud.