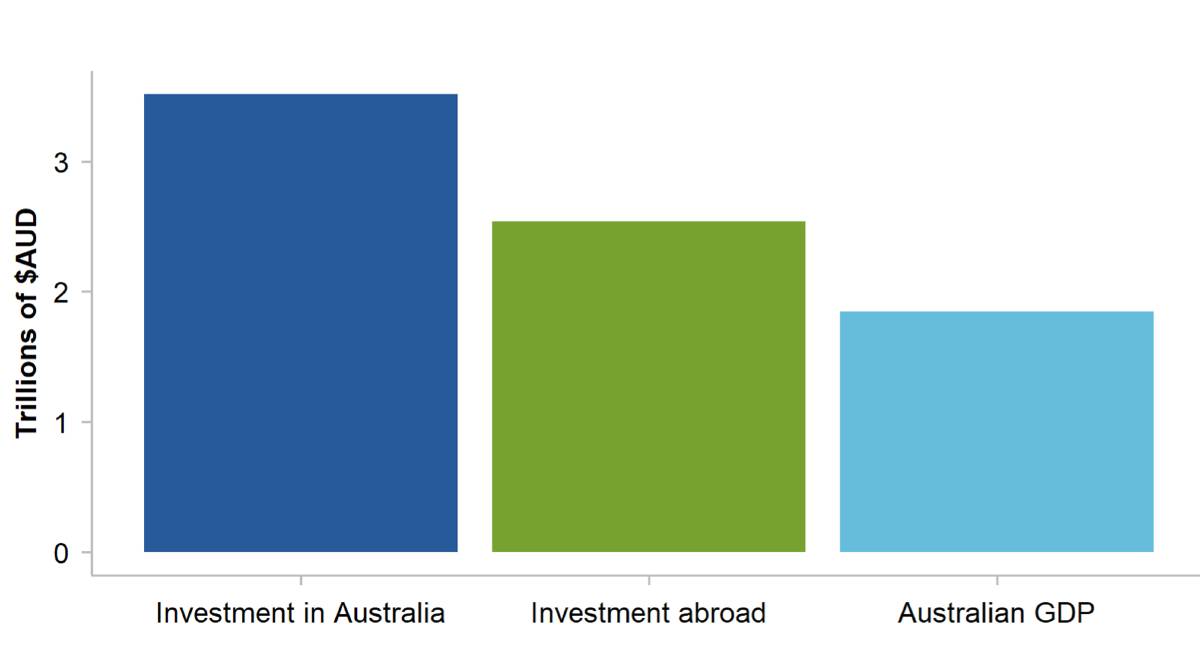 Foreign-owned capital in Australia is $3.5 trillion.

FOREIGN investment can be a contentious issue with often strong and stubborn views on both sides of the debate.

Foreign-owned capital in Australia is $3.5 trillion, according to the Australian Bureau of Statistics (ABS).

Overseas, Australians own about $2.5t of capital.

Foreign direct investment (FDI) is the part of foreign-owned assets that have a degree of foreign control, meaning an investor has at least 10 per cent voting share over the company's big decisions.

Whereas portfolio investment is when the owner is a common creditor or shareholder that can not have direct influence on the business' decisions.

FDI into Australia has risen since 1992 and as at December 2018 accounted for 52pc of gross domestic product (GDP) or $967.5 billion and Australia has become a net equity investor in recent years, due to portfolio investment abroad by superannuation funds.

The largest sources of FDI remain the United States, Japan and the United Kingdom.

Chinese investment in Australia seems to gain lots of attention from the public, largely because Chinese investors have significantly increased their assets in the past decade.

As at December 2018, China was Australia's fifth largest FDI investor.

Certain industries of the Australian economy favour foreign investment more than others.

Mining has the largest proportion of FDI into Australia (38pc of the economy-wide total), followed by manufacturing, real estate (including agricultural land) and financial services (11pc each).

Australia's outward FDI is 38pc of the country's GDP and the nation is the 17th largest foreign direct investor in the world.

The US and UK are the largest recipients of Australian FDI, followed by New Zealand, Canada and Singapore.

This reflects a similar pattern to inward FDI of investing between historical trading partners.

On an industry basis outward FDI is concentrated in three sectors, being financial and insurance services (32pc) and mining and manufacturing (28pc each), which have remained relatively stable over time.

The report stated that foreign funding has enabled the Australian economy to make more investments in capital than would be possible if financed through domestic savings.

Expanding the amount of capital per worker has contributed to higher labour productivity, which has generally led to increased wages and output across the economy.

On the positive side, they include access to new technologies and management practices, increased competition and greater participation in international supply chains.

Whereas on the negative side, competition from efficient foreign businesses can result in some Australian firms going out of business and there are ongoing worries about whether investors generate negative social and environmental spillovers by not complying to domestic regulations.

While globalisation and free trade tend to be supported by Australians, many perceive the risks and threats associated with foreign investment more prominently than the benefits.

The community is particularly sensitive about foreign investment into Australia's residential real estate or agricultural land.

The APC claimed this concern comes despite a lack of evidence that such investment does any harm and considerable evidence of its benefits in the agriculture sector.

In recent years there has been a shift in the nature of risks associated with foreign investment, with additional attention being focused on national security with sensitive sectors or critical infrastructure assets and on the difficulty of collecting tax from multinational corporations.

National security concerns have received greater prominence due to the rising share of our inward investment being sourced from China, as for the first time one of Australia's largest investors is not a democracy or a military ally.

Evidence also suggested that multinationals are becoming increasingly aggressive in their use of tax minimisation strategies, such as thin capitalisation and transfer pricing.

However this balance has shifted in the past decade as national security concerns and aggressive tax minimisations has become more prominent.

The Foreign Investment Review Board has evolved to be more like a regulator, yet its powers have changed little.

The policy framework involves screening foreign investment applications against a national interest test, with the Treasurer as the final decision-maker.

According to the APC some policies of the framework are effective, however others could be improved.

It suggested there are unnecessary costs associated with the design of the national interest test, the use and enforcement of conditions and poor transparency.

The commission also claimed that placing conditions on approvals with little enforcement power is ineffective at mitigating risk.

APC noted that the report was released against the background of the unprecedented COVID-19 pandemic and the economic crisis that eventuated.

It noted that as the economy begins to recover post-COVID-19, the role of foreign investment will be more crucial than ever as many businesses and employers will be shielded from the impact by foreign investment or rely on overseas capital to gain access to funding and expertise.