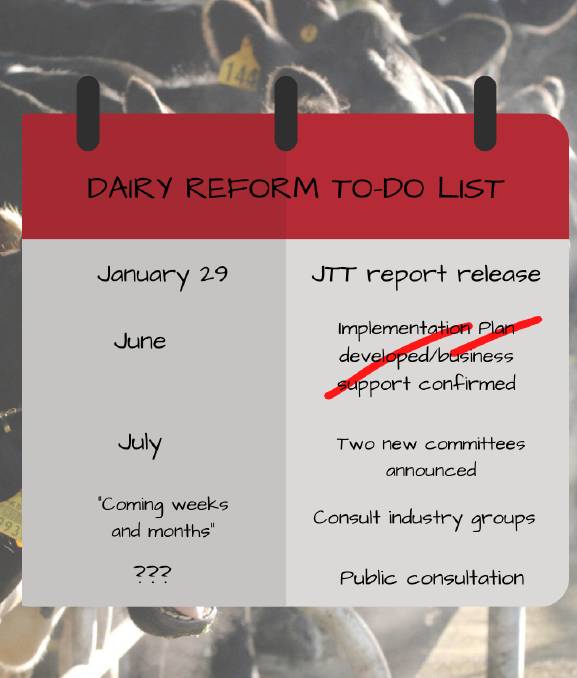 Just how any new dairy body could hang onto millions in taxpayer funds has been called into question as the original deadline for decisions on the new structure passes by without any public progress on the industry's structure.

The Joint Transition Team (JTT) committee report on a new industry model released in January planned to have everything decided and sent to government in June.

Instead, this month's announcement was the formation of two new committees, the Engagement and Design Team and the Organisational Reform Steering Committee.

It's not clear who's on the Engagement and Design Team, other than professional services firm EY as design lead and former Meat & Livestock Australia managing director David Palmer as engagement lead.

There are no new dates for the delivery of anything, apart from consultation "over the coming weeks and months".

Little has reached the minister, who Stock & Land asked about a poll on the replacement of the current system and whether the government would allow a taxpayer funded contribution to a body with both research and advocacy roles.

"There are a range of factors, including in legislation, that prevent the government from being able to support a direct flow of levies to industry representative bodies in any sector.

"I would note that levies collected and administered by the government cannot be used to finance the core operational costs of industry representative bodies or to fund agri-political activity.

"I am open to receiving the Australian Dairy Plan proposal and discussing it further with the industry."

The value of taxpayer contributions to research and development body Dairy Australia was $22.2 million, while farmer levies amounted to $31.7m in 2018-19.

Changing the levy arrangement is a long and convoluted process that includes several checks and balances, three to six months' consultation and a vote.

"Industry organisations that identify a need to change or establish a levy must initiate a levy proposal by consulting all sectors of their industry and as many levy payers as possible," the principles document states.

"The organisation's final submission to the department must show the new or amended levy has majority support from existing and potential levy payers (usually after running a ballot)."

But the Australian Dairy Plan wouldn't be drawn on how a new levy might work.

"Industry reform is an important component of the Dairy Plan and the focus of an engagement and design process involving all parts of the industry," it said.

"It is too early to say how a revised industry structure may require changes to current levy arrangements."

"I'll quite bluntly say, each time you have a protracted process, the chance of something like this getting up off the ground and being effective is probably pretty low," Mr Jenkins said.

He puts that chance at about 45 per cent.