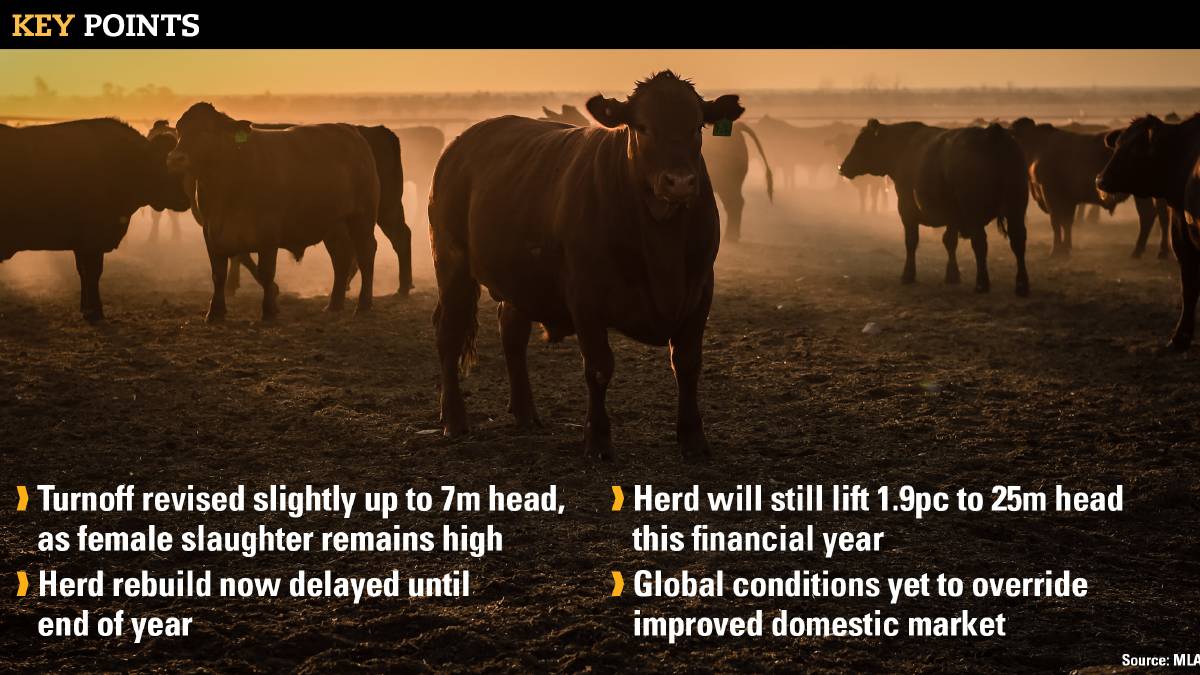 THE much-touted 2020 squeeze on cattle supply is coming slower than anticipated with key industry body Meat & Livestock Australia now saying the herd rebuild has been delayed until the end of the year.

The high number of females that remained in feedlots during the first half of the year has also impacted the female slaughter rate, he said.

The female portion of total slaughter peaked at 56 per cent in May, and on a 12-month rolling average basis sits at 55pc, well above the 47pc typically used to signal herd expansion, MLA reports.

The key changes in the latest cattle projections, the July Update released today, are a slight revision higher for turnoff and the similar knock-on effect to exports since the April projections. The forecast is now for 7m head, up from the 6.9m projected in April. That would still represent a significant drop of 17 per cent compared to 2019 levels.

MLA expects the herd to increase by 1.9pc this financial year, lifting back to 25m head.

Mr Cheetham said a lift in average carcase weights, fuelled by improved seasonal conditions particularly in southern production regions, will help to offset some of the decline in slaughter.

"Average adult carcase weights for 2020 are forecast to reach 294kg/head, an increase of 4pc on 2019, with male and female carcase weights projected to increase by 3kg and 8kg, respectively," he said.

The July Update makes strong note of the uncertainty shrouding markets courtesy of the global health pandemic, however it is unequivocal in placing domestic conditions - that is good rain in many parts and good forecasts of more to come - as the overarching driver of cattle prices still.

The benchmark Eastern Young Cattle Indicator has hit a new peak twice this year - first in March and then again in June, just after returning from a hiatus brought on by movement restrictions impacting saleyard reporting. It reached 772 cents a kilogram carcase weight, 250c above year-ago levels.

It finished yesterday at 756c, which was a jump of 13c for the week.

Mr Cheetham said there was good evidence producers remained optimistic given the change in seasonal conditions.

"But, of course, Covid is creating pressures in the supply chain and there is no doubt there is uncertainty for all stakeholders," he said.

Agents across the country have for most of the year reported the desire to make use of feed has kept restocker demand red hot, and good finished cattle prices - despite unprecedented volatility in overseas markets - has spurred that on.

The resulting strong market has retained the flow of numbers on offer at a level above expectations.

The massive tightening of supply everyone was bracing for has not yet fully eventuated, although there have been stronger signs with reduced yarding sizes in the past fortnight.

That is probably most evident across Queensland. Roma, for example, typically yards around 10,000 head back-to-back during July and is down this week to just over half that, Charters Towers has just dropped from selling two days a week to one and there is space in Blackall's upcoming weaner sales.

Elders livestock manager for Queensland and the Northern Territory Paul Holm said the combination of dry conditions in some areas and ongoing strong prices had probably driven that.

"There are patches in the north that are still very dry but others have colour through the feed and that allows for movements to happen," he said.

"There has also been a fear of pending tight supply for some time, which keeps people buying.

"June is usually a quiet month with the end of the financial year coming but the numbers kept coming in this year and I'd say most of that was price-driven."

Agents across the board agree restocker demand was only likely to get stronger.

"A lot of NSW people will get a trade out of the cattle they bought from Queensland very shortly and so will be likely to get serious about restocking with breeder cattle, with one trade under their belt," Mr Holm said.

He also made the point the perception of value has shifted this year.

"Where once you'd say $2800 for cow and calf was a big price tag, compared to a 200 kilogram heifer making over 400c/kg at the moment, that presents as very good value," he said.