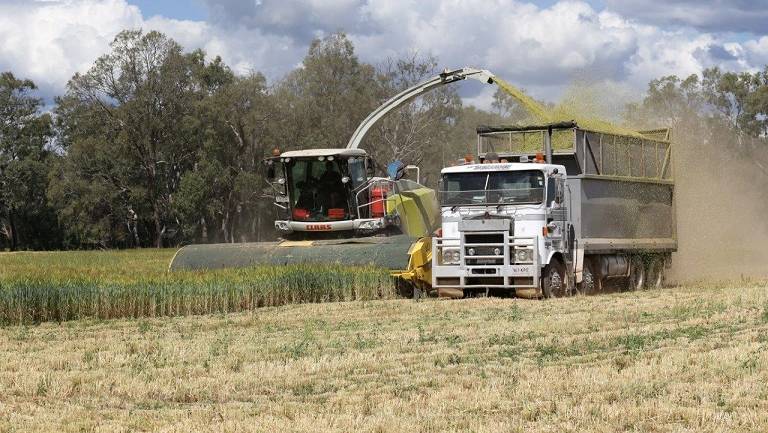 Farmers are being urged to consider making silage if they have more feed than their livestock can use.

After years of scrimping to find enough feed for animals, NSW farmers are now being advised on how to take advantage of the feed glut.

THE TURNAROUND in seasonal conditions in NSW can be tracked by the communications coming out of that state's local land services (LLS) department.

Two years ago the LLS was talking about weighing up the pros and cons of alternative feed sources for livestock in the wake of the drought and managing to find sufficient feed for animals was an ongoing theme up until this year.

Recently, however, the LLS is advising on a more pleasant problem - what to do with too much feed.

The combination of a fantastic year to date in terms of rainfall and relatively low numbers of livestock with numbers dwindling during the drought means farmers need to consider what to do with unused feed to take advantage of it.

The LLS suggested silage as one possible option.

Silage has variously swung in and out of favour with farmers over the years, with the current focus predominately on hay as a fodder preservation method.

However, LLS livestock officer Sue Street said silage had been invaluable for many during the drought, mainly due to its ability to be stored for long periods of time.

"In recent times, we have seen many farmers helped through drought by digging up or opening silage that was stored or buried decades ago," said Ms Street.

She said now, in a period of plenty, could be the time to look to replenish fodder stocks for the next big dry.

"Many producers who de-stocked during drought, now have excess forage, and in some cases, cereal crops which could be turned into silage for future use on-farm or as a saleable product," she said.

To help farmers who are thinking of making silage but have not done so for years, the LLS is hosting a four-part series of webinars in August to help producers decide whether to make silage and how to do it, including storage in underground pits.

The free webinars are open to livestock producers across NSW and the information provided will be applicable in all LLS regions.

NSW Department of Primary Industries livestock research officer, John Piltz, who co-authored the 'Successful Silage' manual will be the guest speaker on the webinars.

He explained that silage is a form of conserving forage which involves natural fermentation and that it had a number of advantages, both nutritionally and operationally, as it can be made outside the main hay producing window, lowering time constraints.

"Silage can be cut earlier in spring and provides more flexibility and higher quality than hay if done correctly," Mr Piltz said.

"The product will generally keep indefinitely while it remains sealed and anaerobic or oxygen-free so it is really important to pack the forage to remove and keep out air," he said.

The webinars will cover forage quality and how it impacts silage quality and livestock production as well as mowing, wilting, harvesting, storage and feeding out of silage.