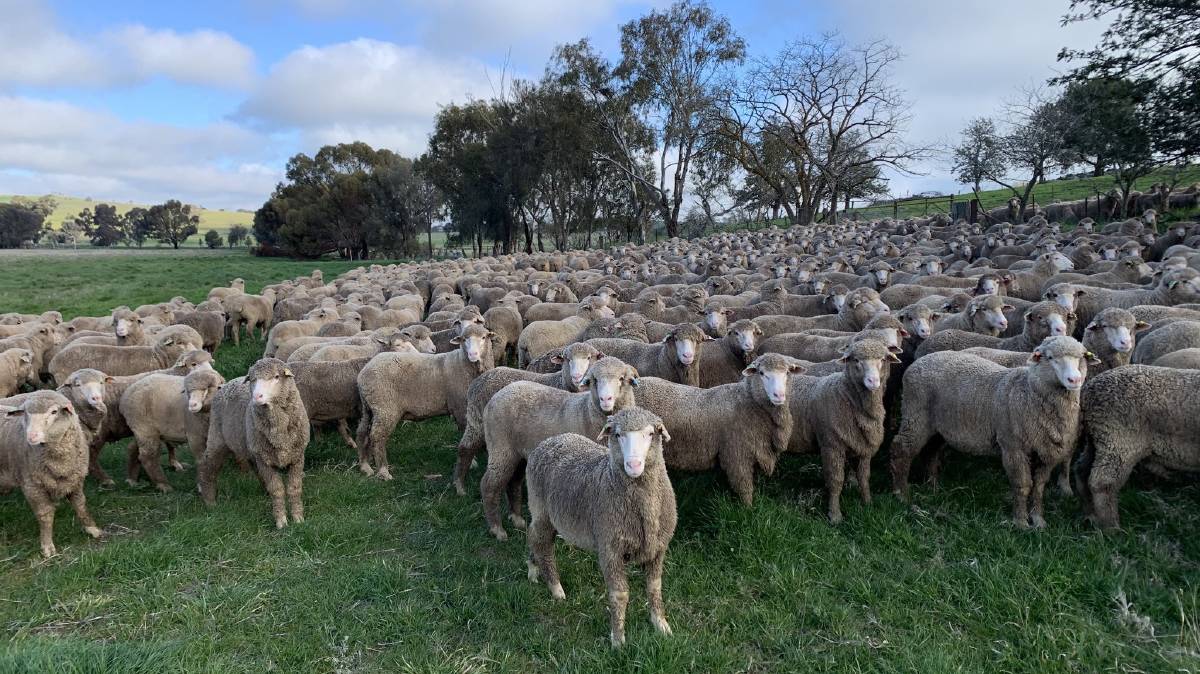 Lambs are weighed every four weeks, with the most recent on July 30. They are now averaging 58 kilograms body weight, gaining 23kg in 16 weeks. Photo supplied.

Australian Merinos taking the risk out of cropping business.

A Merino lamb trial is effectively demonstrating how production risks can be lessoned and greater profitability can be achieved by introducing the Australian Merino to a cropping enterprise.

Developed by Merino genetics consultant, Craig Wilson of Craig Wilson and Associates, The Australian Merino Lamb Trial aims to benchmark entrant's genetics against some the nation's largest and most progressive Merino bloodlines and sheep flocks.

Involving teams of 25 wether lambs from 25 different commercial properties across Australia, the lambs represent bloodlines with an average flock size of 10,000.

The lambs are weighed every four weeks, with the most recent on July 30. Craig Wilson said the trial is a perfect synergy on both sides, and an excellent example of taking the risk out of a cropping business and value adding lambs.

Mr Wilson said whilst grazing cereal crops such as grazing canola and wheat, the lambs have put on over 200 grams per head per day.

"It is just amazing what they can do, and it's not bad considering you can harvest the crop at the end as well," Mr Wilson said.

"It's a perfect synergy on both sides, and an excellent example of taking the risk out of a cropping business and value adding the lambs."

It's a perfect synergy on both sides, and an excellent example of taking the risk out of a cropping business and value adding the lambs - Craig Wilson

With an emphasis on helping farmers optimise every hectare they own, all information gathered will be converted to net profitability per head and per team on both their wool and carcase traits.

In an eye-opening comparison, after collecting 10 years of feedlot data through five rounds of the Peter Westblade Merino Challenge, Australia's largest commercial evaluation of Merino genetics, Mr Wilson said the lambs on grazing crops have out-performed those equivalent sheep in a feedlot.

"It is amazing, but it shows what can happen when you get the nutrition right with sheep," Mr Wilson said.

The lambs will be shorn with six-months wool on them, and will be processed at 13.5 months-old, on average.

Mr Wilson is estimating the lambs will cut at least 5.5kg of wool by the time they are shorn, possibly 6kg.

"I'm confident enough to say they would be growing 800g to 900g of wool a month and I'm predicting they will average about 17-micron," Mr Wilson said.

"They are punching out some soft, white, beautiful Merino wool."

With a lot of large scale enterprises participating in the trial such as Paraway Pastoral Company, Fletchers International Exports and TA Fields Estates, the 25 teams represent about 240,000 ewes across the nation.

The group of randomly selected wethers are run at Harefield, in the Riverina region of NSW and represent bloodlines across the eastern states including Hazeldean, Pooginook, and Centre Plus.

Mr Wilson said when they first set the trial up, they obviously didn't know they were going to get such a favourable season.

"We have obviously had a good year, but the beauty of this is it is going to set a benchmark," he said.

"For the people that have have put their sheep in the trial, they now know what is possible.

"It is not an estimate of how they will perform, it is exactly how they have performed and those two things are very different."

It is not an estimate of how they will perform, it is exactly how they have performed and those two things are very different - Craig Wilson

Getting sheep back into the sheep-wheat belt is a goal of Mr Wilson's, but admits the barriers are numerous, particularly amongst younger people that are often "livestock adverse"

"It is a good way for the younger generation to get into sheep, using them as a risk management tool within their cropping enterprises," he said.

"People need to be thinking about optimising every hectare they own. We are hoping to quantify the whole scenario with the results of the trial."

So far the information gathered shows the wethers have put on over $5 per head per week in meat alone.

"Obviously stocking rates vary, but if you're running 10 to the hectare that is $50 per hectare a week, without even considering the wool side of the equation," Mr Wilson said.

"Young people are the future and we need to get this sort of information out to them and get them back onto farms.

"If they make really good decisions early, they can set themselves up for life."

The final report from the trial will be released at the end of November.