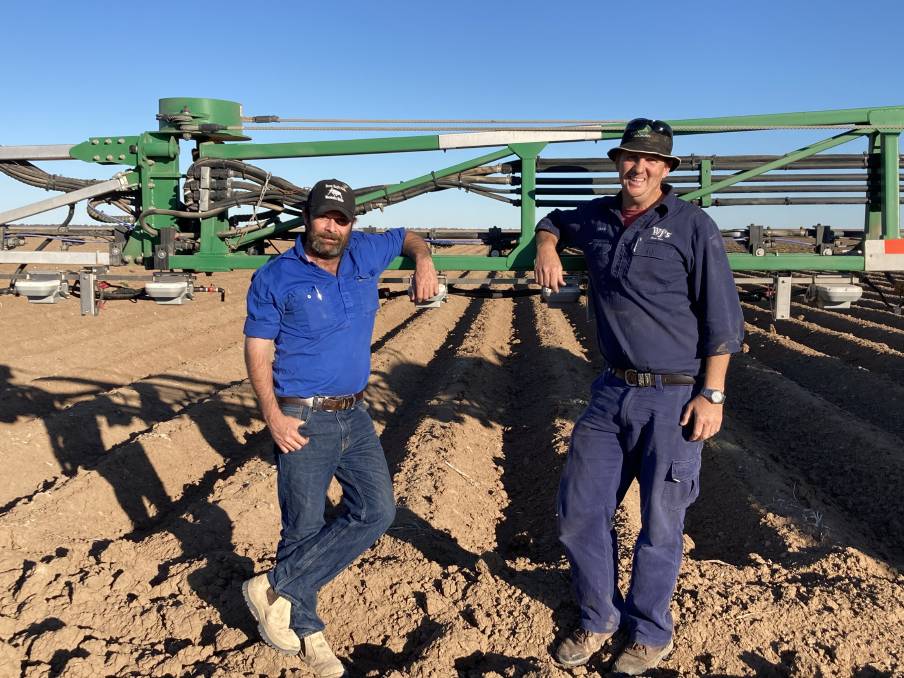 However, he said after completing 25,000 hectares the system had paid for itself and helped save his business from struggling.

The spraying work targets mainly weeds but also insects and disease in cotton as well as winter crops of wheat, barley and chickpea while significant areas of fallow also are covered.

Mr Porter said milk thistle had been a problem this year while fleabane and peach vine also can get out of control. Whitefly and heliothis were some of the major insects targeted in cotton.

The Goldacres sprayers switch between 3-metre and 2m wheel centres for their work on dryland and in irrigated country with 1m beds.

"We were also at the point of needing to do something because of the drought. We didn't want to spend all the money blanket spraying,'' he said.

He said 72 WeedSeeker 2 camera sensors were installed on one of the Goldacres sprayers used for targeting weeds mainly in fallow and wheat stubbles.

The new sensors are spaced at 50cm intervals across booms, effectively reducing the number required by 30 per cent while they are also 50pc lighter than their predecessor.

This has helped to reduce the overall weight on spray booms and also allows the system to be used on wider platforms.

Mr Porter said the ISOBUS compatibility with WeedSeeker 2 was a major bonus.

"It works seamlessly with the GreenStar 2630 display screen. You just plug the controller in and away you go. You can't stuff it up.''

He said the automatic calibration provided by the intelligent, self-learning sensors was another excellent feature, constantly adjusting to the environment they work in.

"They check the background as you are going along - they are unreal."

"Every paddock we go into, it does a calibration in five seconds, which is great for peace of mind.''

Mr Porter said weed mapping, which pinpoints where and when weeds are treated in paddocks, adds further intelligence and is something he can then hand over to agronomists and consultants.

He also liked the fact the spray boom operated fully once above a height of 600 millimetres from the ground.

"If the boom is a bit slow coming down and you are above that height, everything will come on, so you physically can't miss weeds.''

Section control and turn compensation were other popular features of the WeedSeeker 2 system, he said.

Mr Porter said the system was effectively reducing chemical use by 85-90pc, amounting to thousands of dollars in chemical savings and, hence, it already had paid for itself.