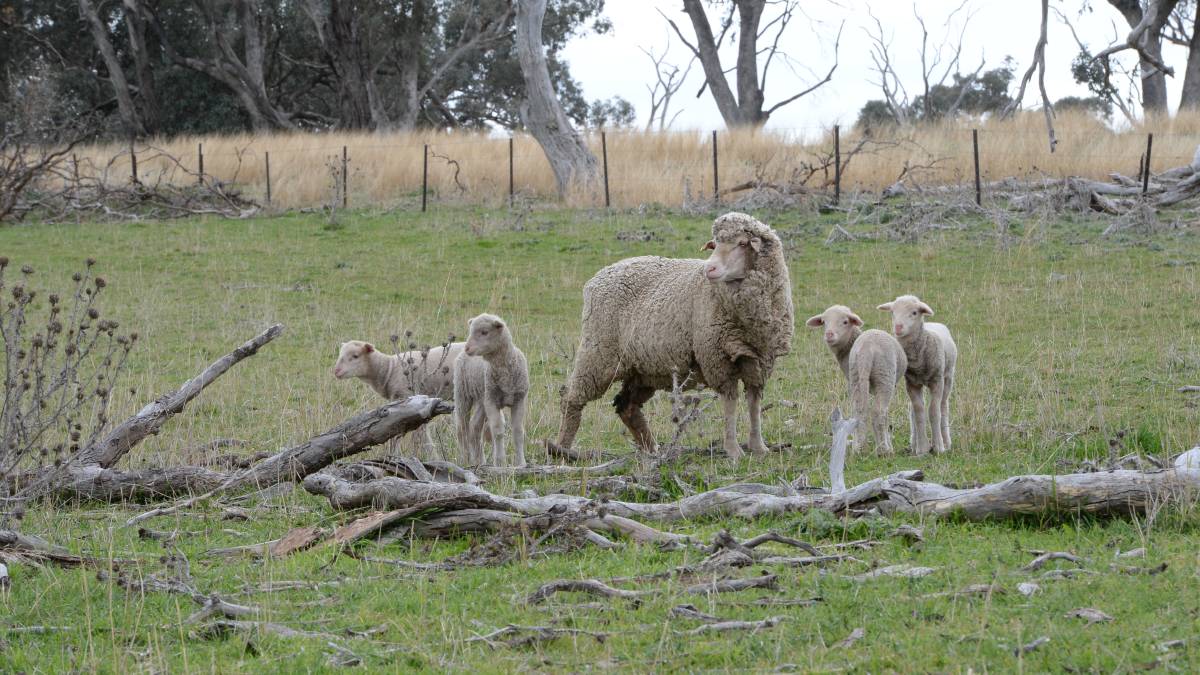 You can make a profit by reducing your lambing mob sizes.

Reducing your lambing mob size by 100 ewes can increase your marking percentage by 4.5 per cent.

Reducing your lambing mob size by 100 ewes can increase your marking percentage by 4.5 per cent.

That's according to Achieve Ag Solutions consultant Nathan Scott, who featured on the first episode of Australian Wool Innovation's new Change Makers video series, which looks to educate producers on the best ways to implement research findings into their flocks.

Mr Scott said everybody wanted to be a better sheep producer, but the only way to do that was to change.

"If we keep doing things the same way we've done them, we'll keep getting the results we've always got," he said.

He believed a big area for improvement was the success of lambing and he had research to back up his claim that mob size had a lot to do with it.

"Did you know that we can improve our lamb marking percentages simply by reducing lambing mob sizes?" he said.

"But will it make you money? The simple answer is yes."

He said the use of permanent sub-divisional fencing could improve your lamb marking percentage and improve your pasture utilisation, both of which contributed to profitability.

"But it doesn't actually have to be that difficult or expensive," he said.

"The use of temporary electronic fencing can allow you to reduce your mob size while keeping your stocking rates up on your best lambing paddocks.

"It doesn't have to be complicated, it just needs to work."

And he said it had the ability to produce immediate results.

"This is irrespective of breed, stocking rate, lambing paddock density and location," he said.

"This research was conducted in both pastoral and high rainfall locations, producing consistent results."

The research he was referring to was conducted by researchers at Murdoch University, and supported by AWI and Meat & Livestock Australia.

It found there was a linear relationship between mob size and lamb survival where the survival of twin-born lambs decreased by between 2-2.5pc for each additional 100 ewes in the mob at lambing, across the 85 on-farm research sites.

It noted that implementing reduced mob sizes at lambing may require temporary or permanent fencing of paddocks, however the cost-benefit analysis showed reducing mob size was justified even where paddocks required subdivision.

So what is it about mob size that is so important?

Mr Scott said it had to do with the number of lambs born on any given day across a paddock.

"And the reason this is important is before a ewe goes into her own active labour, she will start looking for the smell of after birth," he said.

"The hormones kick in and drive her to go looking for the smell.

"This is a fantastic mechanism because it means when she has her lamb, she immediately turns around and cleans it.

"The problem is it kicks in too early."

And he said that would cause her to visit other birth sites around the paddock.

"She'll start trying to clean lambs that aren't hers and that creates confusion and that's where some of the mismothering comes from," he said.

"Simply by reducing our mob size, we can help reduce the amount of birth sites she has access to."

He said people often asked what the ideal twin-lambing mob size was.

"But there is no simple answer other than to say as small as possible," he said.

"We know that reducing twin-lambing size will help."

He said the question shouldn't be whether or not you reduced your mob size, but by which method.

"If you've never used temporary electric fencing with your own flock, I really encourage you to give it a go," he said.

"And we know heavily pregnant ewes aren't that interested in jumping so a couple of hot wires can do a great job of containing them.

"And even if one odd one does go through, does it really matter?"

He said if you were tossing up whether or not to make this change, you should ask yourself whether you could afford to miss the benefits.

"Even if you're already achieving great lamb survival results, we know whatever we do well today, we can do better tomorrow," he said.