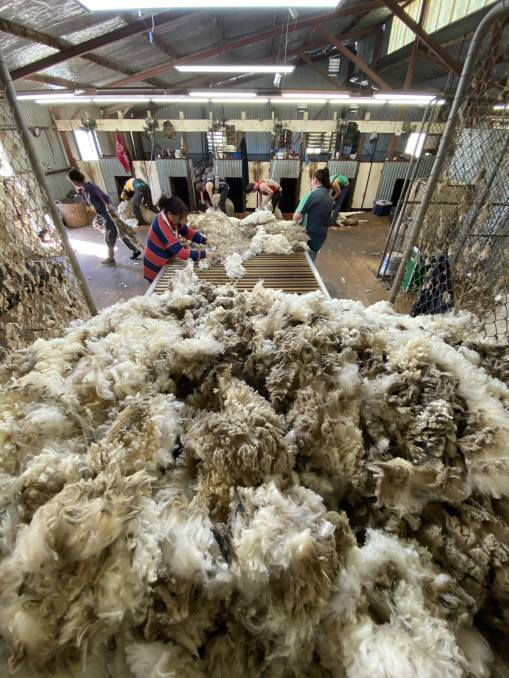 The Australian wool market has taken another hit this week with the AWEX Eastern Market Indicator (EMI) falling to its lowest level in eight years.

All up 33,176 bales were offered, 2904 above last week, with producers not prepared to sell at this type of market level.

The result was 25.7 per cent of the offering being passed in, an increase of 17.5pc from the week prior.

The end result for the EMI was 945 cents per kilogram, clean, a decline of 59c.

According to executive director of the National Council of Wool Selling Brokers, Chris Wilcox, demand was again lower hence falls occurred across all sectors.

"This week's decline has continued the trend since the start of 2020/21 season," Mr Wilcox said.

"Proportionately, the largest decline has been Merino cardings which are down by 26pc."

Mr Wilcox pointed out that the wool between 19 and 22 micron have fallen by 15pc to 19pc, while crossbred wool has declined by between seven and 15pc.

Superfine wool prices were down by nine to 13pc.

But with a flash of good news amongst the bad, Mr Wilcox said the premiums paid for superfine wool over medium Merino wool have lifted since mid-2019.

"The premium for 16.5-micron has risen particularly sharply," he said.

"After the large declines in the premiums seen from the start of 2018, this rebound has pushed the current price premium for 16.5 micron wool to 49pc, well above the long term average and a major recovery from the low level of 7pc hit a year ago."

According to wool reports, Chinese top makers dominated the Merino sector this week and the major European top maker dominated the crossbred segment.

Compared to last season at the same time, almost seven per cent more wool has been sold to the trade even though prices are 37pc lower.

The next three weeks has more wool forecast to sell than the same period last year.

Next week just Melbourne and Sydney are selling as WA sits out as this was the "wool week" scheduled event, but was cancelled due to Covid-19.