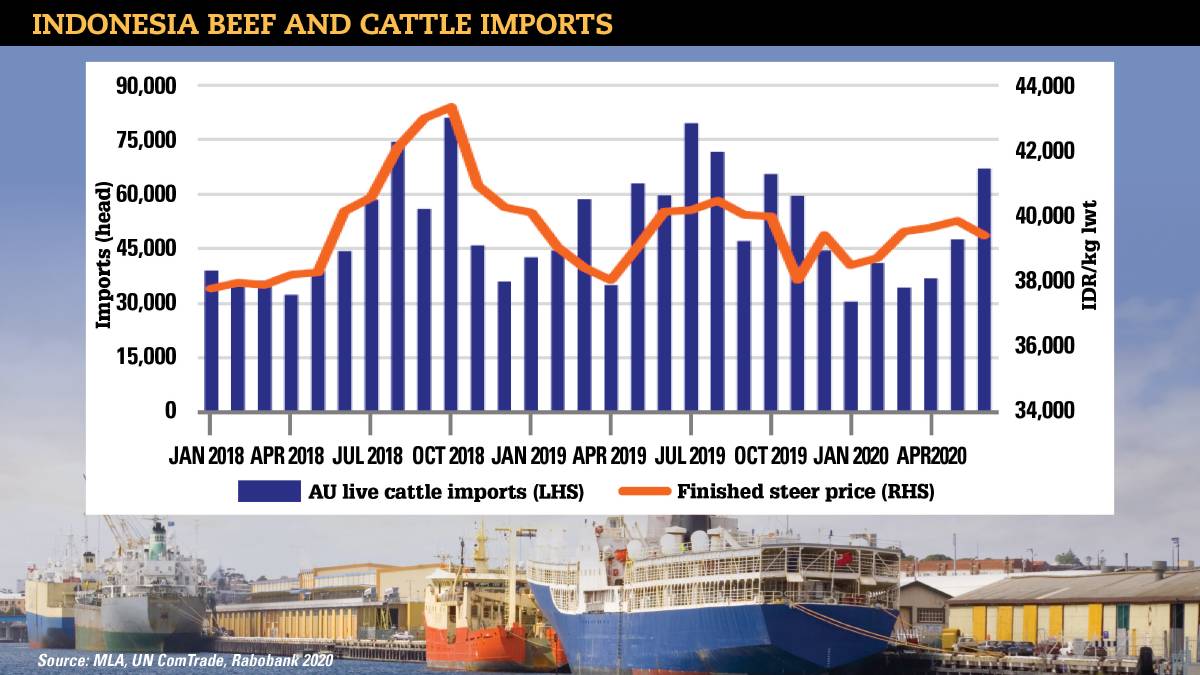 THE high cost of Australian feeder cattle may be neutralising the advantages negotiated in the recent trade deal with Indonesia but so far there hasn't been any flow back to producers supplying live exporters.

Analysts say Indonesian importers are likely operating at a loss now and the big prices of Australian cattle will at some point hit demand from this key market.

This offsets the in-quota 5pc import tax exemption under the Indonesia-Australia Comprehensive Economic Partnership Agreement which came into force in July.

Rabobank says based on a feeder price of $3.55/kg and finished steer price of IDR40,000/kg liveweight, Indonesian feedlotters would have already incurred a negative margin even with no import tax.

The latest government export figures show volumes to Indonesia reduced to 39,988 head in July, down from a spike of 67,062 head in June, but Mr Harvey-Sutton said that was offset - and then some - by growing demand from Vietnam.

Turn-off was reduced through 2020 as herds recover from the massive drought destocking of last year but inordinately hot weather in northern regions through August, and bushfires, was now accelerating muster plans, she said.

"It has no doubt been supply constraints that has held live-ex prices up but we are aware there is a pending risk not yet being borne out," Ms White said.

"We understand there is a backlog of carabeef (Indian buffalo meat) now moving through the Indonesian market that was held up during COVID restrictions."

Analysts and industry leaders say there a number of converging and conflicting dynamics at play in Indonesia which makes forecasting likely demand from that market very hard at the moment.

Mr Harvey-Sutton, who heads up the Australian Live Exporters' Council, said the Indonesia Government has long had a strong strategy to keep beef prices affordable and carabeef has been used as a price suppression mechanism.

On the other side, the live cattle trade with Australia plays a critical role in the Indonesian economy and food security needs are always ticking away in the background.

And the Rabobank report said demand for offal and hide had recovered in Indonesia since social distancing measures were lifted in July, providing some relief in slaughtering margins.

Rabobank senior animal protein analyst Angus Gidley-Baird said along with carabeef, the competition for Australian cattle in Indonesia was domestically-sourced cattle and poultry.

Weaker purchasing power in Indonesia was certainly driving consumers to trade down to cheaper chicken at the moment, he said.

Rabobank's forecast for Indonesia's feeder cattle imports is a 15 to 20pc decline for the full year.