"This year has been difficult for producers so it was pleasing to see all the rams sell."

The sun was out making for a warm day at the Jones family's property and saw onlookers, as well as the usual client list, make the trip to inspect and bid on the stud's rams.

This year's selection of rams well and truly adhered to the Belka Valley slogan of size and softness, plain and simple, with soft, crimpy, bright, white wool being a feature of the offering.

Stud principals Phil and Robyn Jones had yet another successful sale, with loyal clientele helping to clear all 70 Poll Merino rams on offer.

Elders stud stock representative and auctioneer Nathan King said the sale went very well, specially in what has been a tough year.

"The quality of the line-up of rams was strong and there was great clearance as a result," Mr King said.

"This year has been difficult for producers so it was pleasing to see all the rams sell."

Mr King said the support from clients was greatly appreciated. 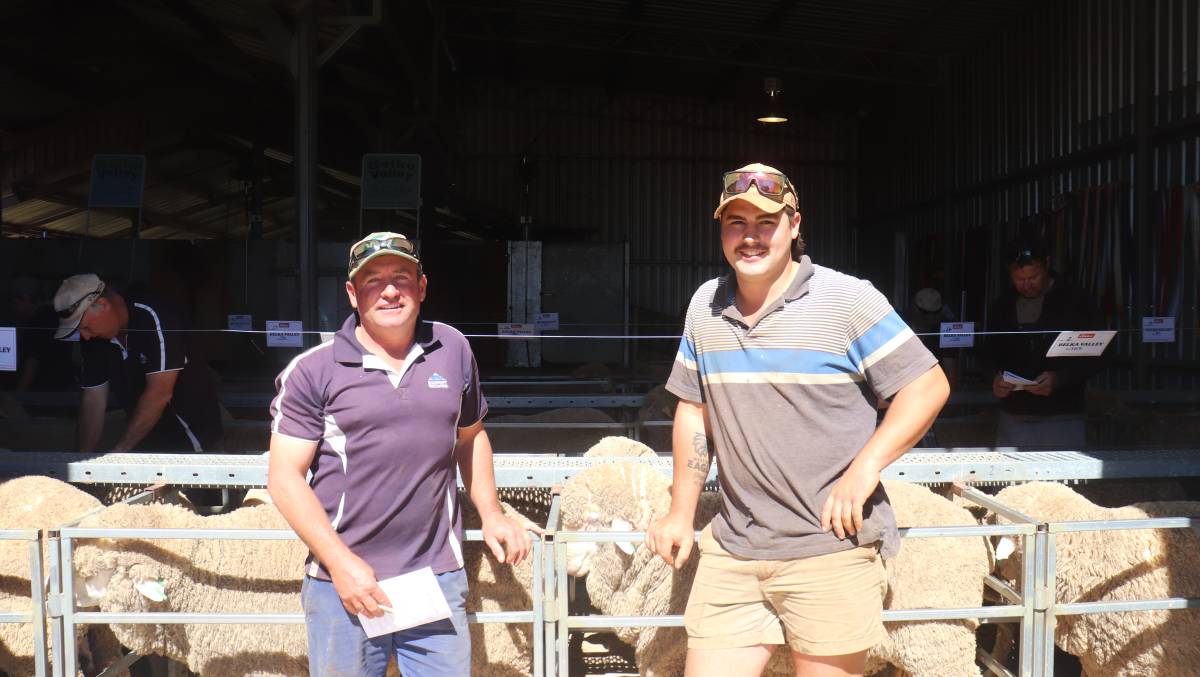 Paul Wanless (left), Muntadgin and Max Guiver, Muntadgin looking at the Belka Valley rams prior to the sale. Mr Wanless went on to be one of the volume buyers of the sale securing a total of eight rams.

Once again the top-price buyers of the sale were Nick and Pam Spark, D & MA Spark & Co, Bonnie Rock, when they battled it out for the ram in lot nine, pushing prices to the sale top of $2600.

Mr King described the ram as long-bodied with soft wool when he stood over the pen to offer the lot.

Nick and Pam Spark said they have been buying from the Jones for many years and liked the consistent quality of rams they produce.

The Sparks run a commercial flock of 6000 breeding ewes which are mated to Merino rams.

By the end of the day, the Sparks had secured another five rams to finish with a team of six at an overall average of $1917.

The second-highest price of the sale was $2500 and was achieved by four different rams.

By the end of the sale the Aulds had assembled another four rams for a total of five averaging $1640. As the sale progressed, the Majors picked up another three rams, finishing at an average of $1875.

Mr Wanless went on to purchase a further seven rams and finished with an average of $1788 over his team of eight.

Return buyer Chris Flintham, CB Flintham & Co, Muntadgin, put together an impressive team of 16 rams paying a top of $2400 and an average of $1763 to be the overall volume buyer of the sale.

Mr Flintham said they were all well-rounded rams with good wool that suit his operation.

Another strong supporter of the sale was Edmundsbury Farms, Merredin, purchasing five rams at a top of $1700 (twice) and an average of $1360.

Stud principal Phil Jones said he was extremely pleased with the sale result and was humbled by the support of their clients.

"The majority of the buyers were returning clients and it has been a tough season, so for them to continue to support us was really great," Mr Jones said.