"It's been a crazy year for everyone but we will soldier on." THE Davies family notched up a solid result at its annual Cardiff Merino and Poll Merino stud on-property ram sale at Yorkrakine recently.

The COVID-19 impacted wool market, a flurry of Merino ewes exiting WA earlier in the year and tightening seasonal conditions in large parts of the Wheatbelt, continues to present its share of challenges to Merino breeders.

And despite being aware of some reduced requirements in their client base and the likely impact on sale clearances, the Davies family maintained the sale ram numbers, giving buyers a wide selection.

Cardiff stud's list of loyal supporters joined some new faces to compete strongly on the majority of the top line-up of 120 well-grown and presented Wheatbelt Merino and Poll Merino rams.

Competition softened toward the backend of the sale which allowed buyers to fill their requirements at value, while some rams were overlooked at auction.

And at the end of selling, the Elders selling team, led by auctioneers Nathan King and Steele Hathway, had cleared 103 rams (86 per cent) at auction to average $1629. 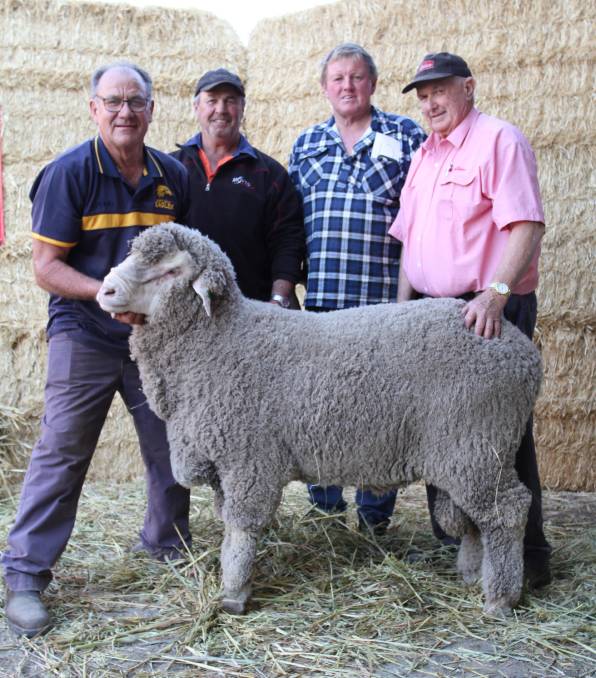 Compared to last year's inaugural sale where there was a complete clearance of 120 rams, the average dropped only $116 from $1713.

There was another complete clearance in the Poll line-up, with 40 rams selling to average $1580, back $165 on last year's average on the same number of rams.

Negotiations on the overlooked rams continued following the sale with a number of these finding new homes after Farm Weekly left the property.

In his sale opening address, Cardiff stud principal Quentin Davies said the turn out to the sale was overwhelming and thanked his family, staff and everyone involved in making the sale happen.

"It's been a crazy year for everyone but we will soldier on," Mr Davies said.

"It is what it is and I'm sure we will get through it." Mr Davies said the enjoyment of presenting the rams and friendships formed with buyers and people involved in the industry over the years was why he "sticks in the game".

Since seeing the ram at the Narrogin Long Wool Day and again at the Pink Shearing For Liz fundraiser for breast cancer research at Cardiff recently, first-time buyer Derek Hooper, Wanjalonar stud, Narembeen, had his sights set on the sale team leader and paid the $6600 top price for his new stud sire.

Mr Hooper said the ram's wool and constitution was consistent with their own Wanjalonar breeding and the Wheatbelt area.

"We know the Woodyarrup background and the way this family line has been breeding," Mr Hooper said.

"It stands well and we liked his outlook, wool density, crimp and wool cutting ability, so we will add him to our sire battery and see how he goes."

While not planned, Mr Hooper also paid $4000 for the Woodyarrup Deluxe son in lot nine which was only recently released from Cardiff's stud reserves.

Kununoppin buyers AG & NL Woodfield collected three Merino rams at the sale and paid to the sale's next highest price of $3600 for another 111kg blade shorn Woodyarrup Gov son in lot four that tested 20.5 micron, 2.8 SD and 100pc CF.

Consistent buyer at the top end of the market for Cardiff rams, Des Haywood, DA & YM Haywood, Goomalling, finished the sale with six Merino rams and paid the $3500 top price in the machine shorn line-up for a 117kg ram from a Junior syndicate joining with tests of 18.8 micron, 4 SD, 99.1pc CF and 6.4kg greasy fleece weight (GFW).

Other top end regular buyers, Gra-Mel Nominees, Badgingarra, bid to $3200 for one of four rams with their top price reserved for the blade shorn 111kg Charinga Harry bred ram in lot three with tests of 20.2 micron, 3 SD and 99.8pc CF.

Mr Large topped up his account with four of the overlooked rams following the sale.

Mr Coleman collected three Poll rams which included two from the blade shorn line-up at $2700 with his top price paid for the machine shorn sale team leader, a 109kg ram bred from a Junior syndicate with tests of 18.7 micron, 3 SD, 99.8pc CF and 5.6kg GFW.