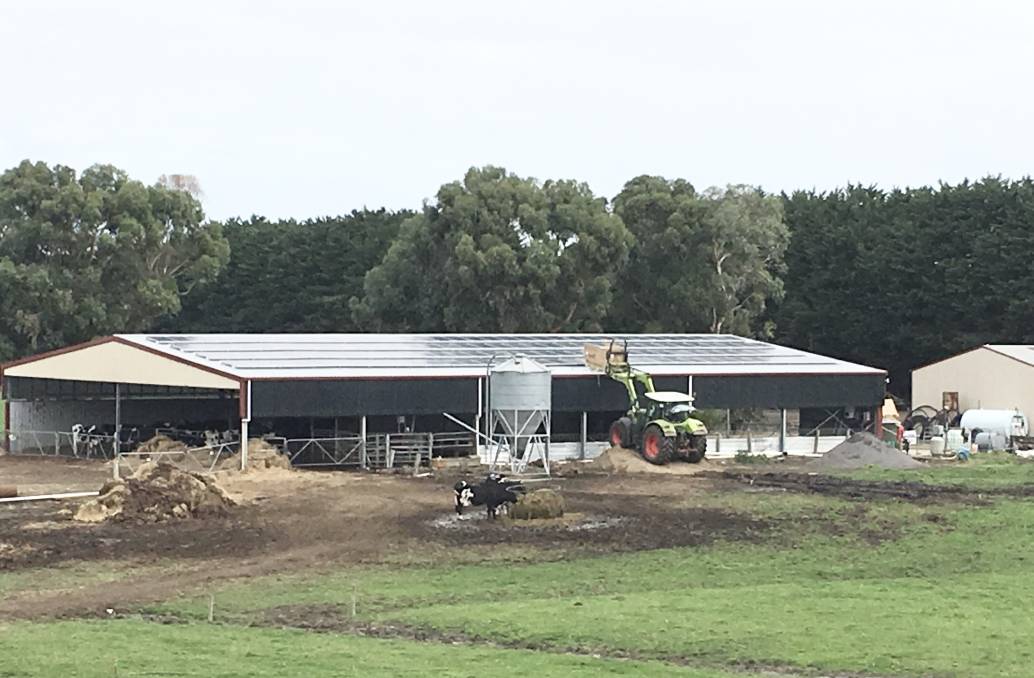 SMART SYSTEMS: The Doolan family is committed to reducing on-farm power use and meeting the bulk of its energy needs with solar as part of efforts to be a sustainable dairy business.

A goal to cut energy use has sparked a transformation of practices to farm more sustainably, cost efficiently and productively for a leading Victorian dairy business at Ecklin, in the south of the state.

Recently recognised for its efforts with a Great South West Dairy Award for Natural Resource and Sustainability, Doolan Farms is committed to reducing on-farm power use and meeting the bulk of its needs with solar.

Electricity is one of the biggest fixed costs for the business, after livestock feed and fertiliser, and an energy audit of the farm's 50-unit rotary dairy in 2018 found systems for cooling milk and heating water used for cleaning accounted for 50 per cent of total power use and 43pc of costs.

Our aim is to at least halve our electricity bills. But, in the meantime, we can use solar energy to meet most of the requirements for heating water, crushing grain and running water pumps all during the day. - Ecklin dairy farmer Sam Doolan

Sam Doolan, who runs the dairy on his family's well-established 270-hectare property with wife Belinda, brother Peter and his wife Bonnie and parents Sam and Carol, said their philosophy was to farm for the future and ensure a sustainable business for the fourth generation when it was time for them to take over.

The Doolans milk 600 cows at peak times of the year and produce about 4.2 million litres of fresh milk annually.

About 80 per cent of their dairy herd is made up of Holstein Friesians and they do some crossbreeding using Jersey and Australian Red genetics.

Cows are predominantly run on perennial ryegrass and clover pastures in the winter and - as part of strategies to boost soil health, mitigate the effects of soil constraints and diversify the pasture base - summer crops and 'salad bowl' mixes are being sown for grazing in the hotter months.

In the 2019-20 summer, the Doolans started a trial using a multi-species pasture mix that included rape, sorghum, millet, chicory and turnips planted together.

This aims to provide stock with a more balanced diet, increase biodiversity, plough minerals back into the soil and reduce fertiliser use and costs.

Mr Doolan said the idea came to them from the 'Keeping Carbon of the Farm' initiative and would identify the best varieties and mixes for their environment to facilitate soil improvement, carbon sequestration and higher cow production performance.

The trials at the Doolan's property involve other local farmers through the Heytesbury District Landcare Network and have received funding from the Department of Environment, Land, Water and Planning, through the Virtual Centre for Climate Change Innovation program. IN THE MIX: Sowing multi-species 'salad bowl' pasture mixes is being trialed by Sam, left, and Peter Doolan as they strive for soil improvement, diversity of the biosphere and higher animal production and health.

On top of pasture grazing, the Doolan Farms dairy cows are fed a ration mix of canola meal and crushed barley in the dairy at milking.

The average rate of this supplementary feed is seven kilograms per head per day - ranging from about 5 to 9kg/head/day depending on the time of year.

Cows are also fed cereal hay in the winter months as a fibre source, and receive home-grown pasture silage in the summer.

Continual improvements and upgrades have been rolled-out at the Doolan Farms dairy - constructed in 1995 - and it is now fully automated, making it possible for a single person to carry out milking.

This allows immediate recording of cow data, such as pregnancy testing results, and ensures they are fed to their individual lactation stage. 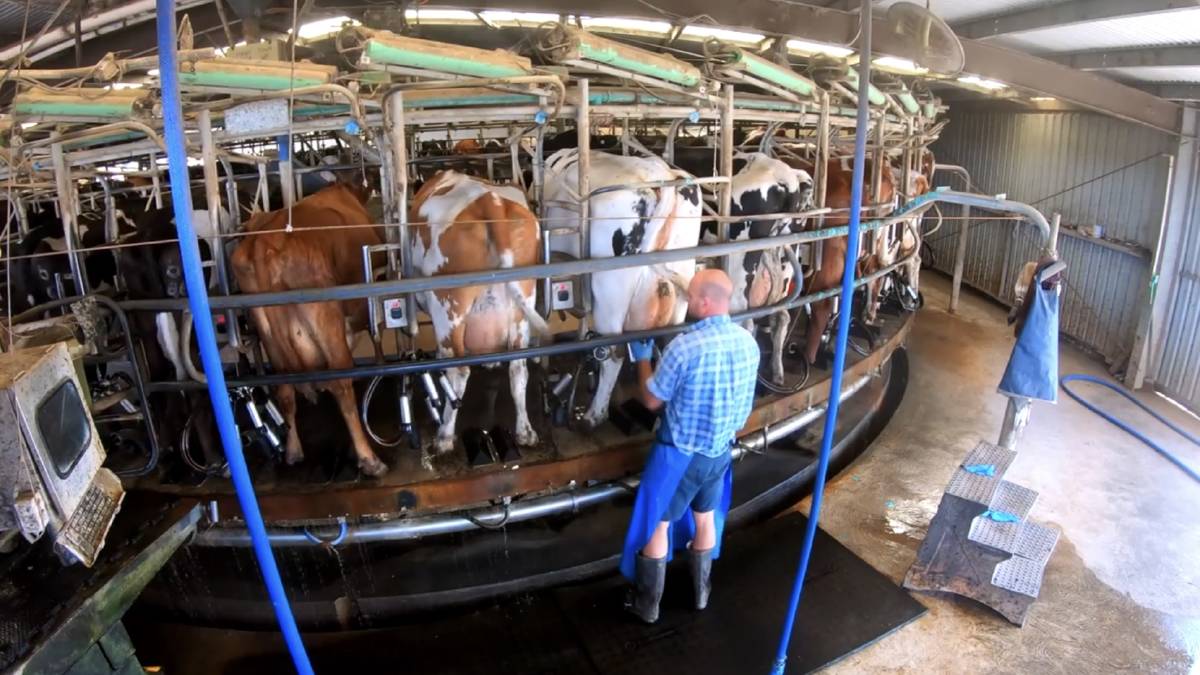 ONE MAN BAND: The Doolan Farm dairy is configured to be operated by a single person.

The dairy also has automatic drafting, cup removal and teat spraying for ease of management.

"These changes have reduced our business labour requirements - to the point where we have only one external full-time employee for the farm - and we record all information for detailed cost and productivity analyses," Mr Doolan said.

"We have been able to increase annual cow numbers from about 450 to 600 head and - at the same time - milking is much faster, with quicker throughput of cows."

Mr Doolan said calving on the property was split, with half of the herd dropping in spring and half in autumn.

He said this eased labour load and had been made more feasible in recent years as processors spread milk price premiums more evenly across the year - rather than just in the summer months when supplies have typically been shorter.

Cows are housed in sheds for calving and cameras are linked to home computers and mobile phones so progress and any problems can be monitored.

In line with upgrading automation and innovation inside the dairy, the Doolans' energy audit was a catalyst to quantifying the amount and spread of power being used - and to set targets for making savings, or finding alternatives.

The family discovered that its process for cooling milk during the day was the biggest 'sink' - accounting for 30pc of total energy use and costs. But they also found it would be difficult to reduce this when using power from the grid.

Heating water for cleaning the dairy plant consumed 20pc of total power and made up 13pc of power costs.

The Doolans realised this could be lowered by switching the timing of heating from during the night to the middle of the day using the solar system.

The next step to bring down costs and further embrace a sustainable approach for the business was to make a major investment into 36 kilowatt and 10KW solar panel systems, with panels installed on the roof of a nearby shed and a disused dairy, respectively. 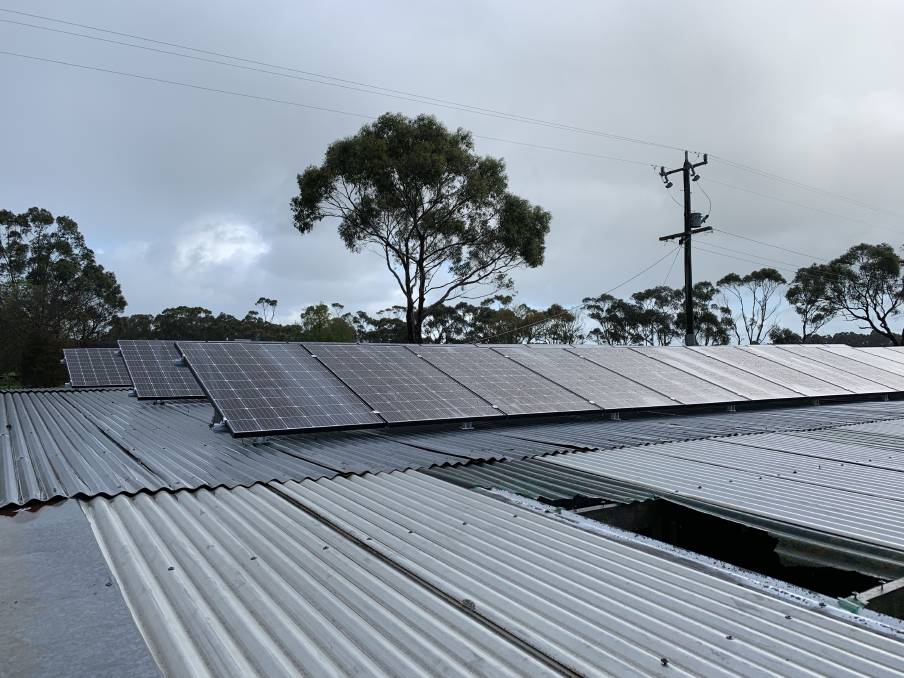 LOOKING UP: Solar panels on the roof of a shed and on a disused dairy are part of a 36 kilowatt and a 10KW power-generating configuration.

Mr Doolan said installing the solar systems had slashed about $8000 per year from their $40,000-odd annual power bill during the past five years.

"Our aim is to at least halve our electricity bills," he said.

"But, in the meantime, we can use solar energy to meet most of the requirements for heating water, crushing grain and running water pumps all during the day.

"We are now considering an update to a more power-efficient milk chilling system, with support from a government rebate scheme, which will reduce our consumption from the grid even further."

The Doolans are also planning to add more solar panels in the next couple of years, which is predicted to save them about $20,000 annually in energy costs - and will further reduce greenhouse gas emissions from the farm by about 25 per cent.

Peter Doolan is lending his past experience as a qualified electrician to the solar project, which has eased the financial and management burdens on installing, maintaining and extending the system.

He has had a diesel generator installed for back-up, just in case the power goes out or the cost of electricity becomes too much.

"But we are surprised at how much energy we can get from the sun in summer, and the panel performance during winter - when sunny days generate as much power - or more than - we get on cloudy days in summer," he said.

"Panels are also getting cheaper and making solar a more economically palatable proposition.

"But I would advise any farmers considering the switch to solar to do their homework and identify the best type and quality of system for their needs.

"An energy audit is a good first step to working out what is costing you the most and where savings can be made to tighten the bottom-line - while reducing emissions at the same time."

Cutting energy use and costs is just one of the many sustainability strategies being implemented on Doolan Farms.

Every aspect of the operation has been analysed and key goals developed for:

As part of participation in the Keeping Carbon on the Farm project, the Doolan family has planted 5000 native trees to: help capture atmospheric carbon dioxide to sequester in soil; provide shelter belts for cows against prevailing cold south westerly winds; and improve habitat for local wildlife species.

They have installed a Smart Monitoring System, which is designed to gather information through sensors to monitor milk temperatures, hot and cold water temperatures, humidity and vat volume - all in an effort to make these processes run at optimum efficiency.

This year, the family is trialing bio-char - incorporated into the soil with cultivation - as an alternative to fertiliser and to improve soil water holding capacity and organic matter for higher pasture productivity.

The make-up of multi-species pasture mixes will continue to be fine-tuned as the family assesses which pastures are performing best for soil improvement, diversity of the biosphere and animal production and health.

During the 2019-20 summer, Mr Doolan's father (also Sam) constructed a water catchment dam to be used for irrigating summer crops and pastures for the milkers. 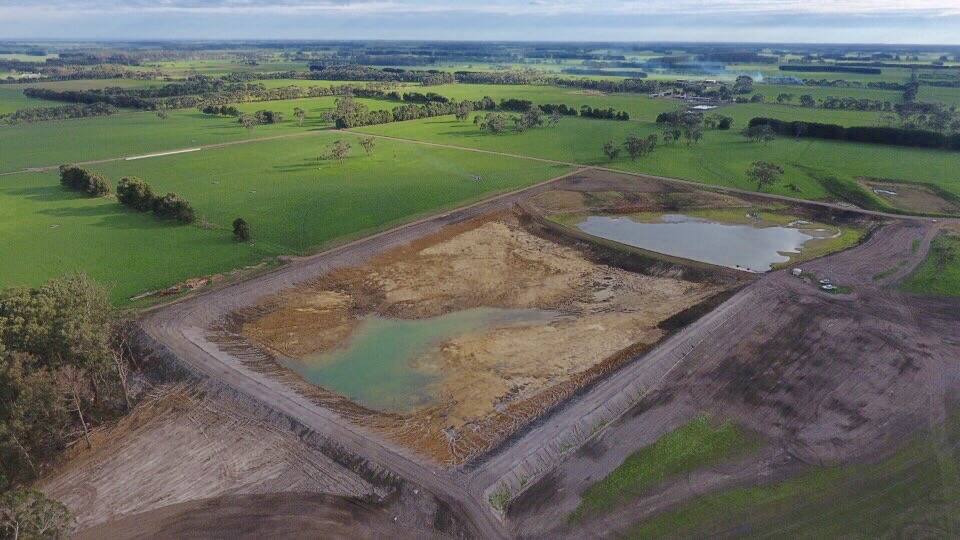 WATER WISE: Sam Doolan (senior) created a catchment to be used for irrigating pastures for feed.

Inside the dairy, the Doolans will soon be using a variable speed drive on the vaccum pump, which means less power used as the last of the milkers go through the process.

Mr Doolan said his whole family was deeply committed to farming sustainably and - to monitor their progress - they would conduct regular energy audits in future to identify where further initiatives and savings can be made.

This approach led to the family receiving the Great South West Dairy Award for Natural Resource and Sustainability, sponsored by Corangamite CMA and Glenelg Hopkins Catchment Management Authorities, in August.

"We feel honored to have won this category," Mr Doolan said.

"It is important to our values and our family's future farming succession plans.

"We have always wanted to be working towards setting up a sustainable farm for our next Doolan generations."