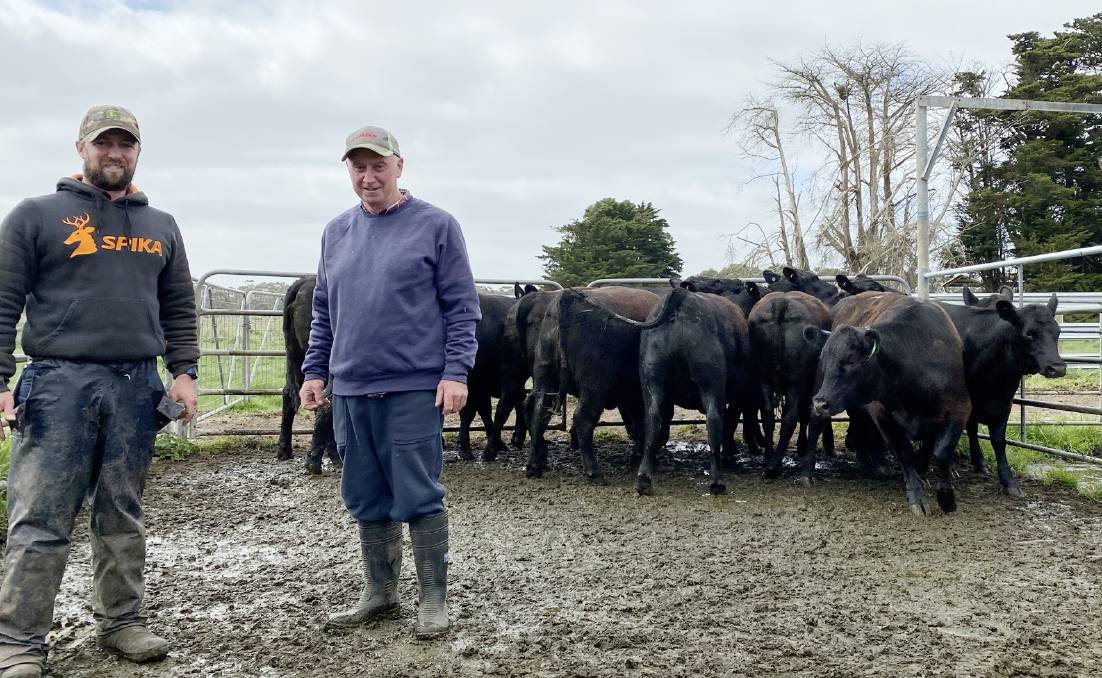 QUALITY BEEF: Nathan Hooper and his father Michael with some of the Angus heifers they sold at Mortlake last Thursday.

The purchase of a 240 hectare run-off block provided the ideal opportunity to re-introduce beef into a south-west Victorian family operation.

The Hoopers run a 1000-cow dairy farm at Nullawarre, Vic, and purchased the block at Panmure, Vic, in February this year.

Nathan Hooper said the block was bought to carry replacement dairy heifers that were coming off milk before being returned to the home farm as two-year-old heifers to go into the herd.

When feeder cattle prices were forecast to be "good", they decided to purchase some beef steers and heifers to grow out.

The beef side utilised the spare feed on the outblock during the winter when there were fewer replacement dairy heifers being carried.

"This past winter has been the best winter I can remember," Mr Hooper said.

"This area can get wet, but this year it was perfect."

This foray into beef cattle was not the first time for the family.

"Mr grandfather and father always ran beef cattle alongside the dairy in the past," Mr Hooper said.

"We dropped the beef to concentrate on the dairy operation but the new outblock opened up the opportunity again."

Mr Hooper said they first purchased the heifers as weaners in February through the Naracoorte yards in SA.

"The steers were bought through the Mortlake yards and weighed about the same."

The steer portion sold at the September store sale at Mortlake through Southern Grampians Livestock and weighed 434kg, selling for 420 cents a kilogram or $1825, bought for a feedlot.

The heifer portion were offered in four pens with one pen making 392c/kg or $1696 while three pens, comprising 52, averaging around 400kg a head, made between 392c/kg and 424c/kg, and were purchased for a Gippsland client to be joined in a few months time.

"We were really happy with the prices. They were by far the best I've ever received," Mr Hooper said.

They were still carrying a draft of 50 light steers bought in Mortlake that weighed around 200kg and would be taken through to 400kg plus.

There were also 35 steers that were kept back from the recent sale to get a "bit more weight on them".

He said the coronavirus restrictions were not that onerous.

He said the staff of six were well trained and followed all the protocols including wearing face masks and hand sanitising.