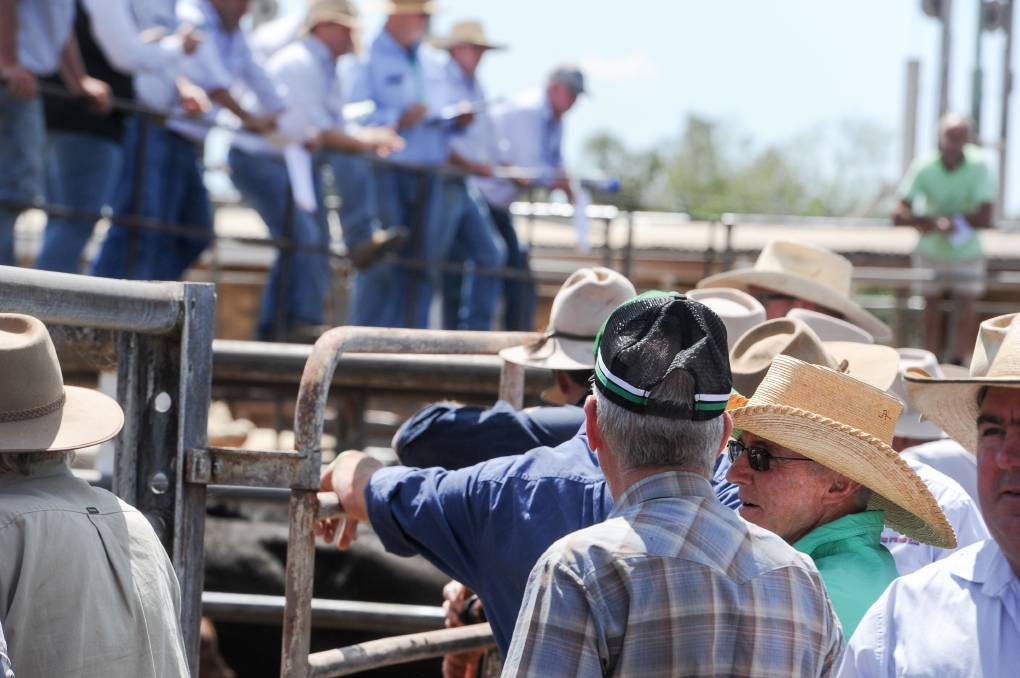 TAKE A GUESS: How long the grass fever that has fueled hectic saleyard action will continue is the big question in beef right now. Photo: Lucy Kinbacher

Season and supply point to ongoing strong market but analysts are more bearish.

WHILE the season and supply situation continue to play into the hands of those selling cattle, analysts are now starting to talk price realignment and a more bearish outlook.

The benchmark Eastern Young Cattle Indicator has jumped another 7 cents a kilogram carcase weight in the past week to sit at 775, which puts it close to the 784c record it set at the end of August. It is travelling a solid 286c above year-ago levels and has been sitting at or above the 750c mark for much of this year.

Dry and windy conditions this week, particularly in Queensland but also in parts of Victoria which are on a knife's edge, may bite into the restocking fervour temporarily, and see a few more offered, but the bigger picture of La Nina still bodes very strongly for the cattle market.

Mecardo analyst Adrian Ladaniwskyi, speaking on the Commodity Conversations podcast, said the EYCI could not stay at such a high level forever.

"At the moment, it is driven by restocking pressure but the Australian cattle market is out of sync with worldwide cattle prices and there is a lot of competition out there from South America and the United States," he said.

"We are also coming into a worldwide depression caused by COVID-19.

"The ability of people to continue to pay high prices for beef will be limited, not to mention the spread between the prices processors have been receiving on the export front versus what they are paying for cattle - they are making losses at the moment and that can't continue forever."

The global scene was definitely the big unknown, agents said.

However they also pointed out warnings about decreasing international demand flowing back to the Australian cattle market had been out there for much of this year but restocker demand had continued to dominate.

Southern agents said the very good season in parts of Victoria, coupled with ongoing demand from NSW restockers with full paddocks and limited access to cattle, was pushing prices for young cattle at their yards beyond even what the EYCI indicated.

"Our store market has been well over that since early August. Smaller cattle are now making in excess of $6/kg," said Colin Jones, Bill Wyndam & Company at Bairnsdale.

While East Gippsland was on a cusp and needed rain 'immediately', buyers in other regions were snapping up cattle on offer, he said.

"Usually around this time of the year, fat cattle start coming out of NSW and the Victorian market takes a dip but with the amount of young cattle still going into NSW I think things are different this year," he said.

"If you believe the La Nina talk, that will only continue. But we don't get excited about things until they happen."

Marty Gleeson, Elders Livestock at Ballarat, said feed growth would fire up as it gets warmer, pumping even more demand into the market for the smaller pool of cattle available.

"While ever NSW is green, our market will stay strong," he said.

Fat cattle were also selling well, and were in short supply, making $2000-plus a head, he said.

That provided traders and restockers with incentive to pay the bigger prices for young cattle.

A lot of the kill cattle were going to Tasmania but Victorian processors were still pretty active in the market, he said.

Further, the export heifer job was keeping the price of Angus females strong.

"The ongoing competition between restockers and processors, evident across the store market, is driving prices upwards and holding them there," she said.

This week a new national record for steers was set with a line of 153 Angus and Angus-crosses, weighing 158kgs, breaking the $7 mark liveweight.

The dearer market trend was achieved by most stock categories on AuctionsPlus with the most significant jump claimed by the light steers under 200kgs, increasing 100c to average 583c.