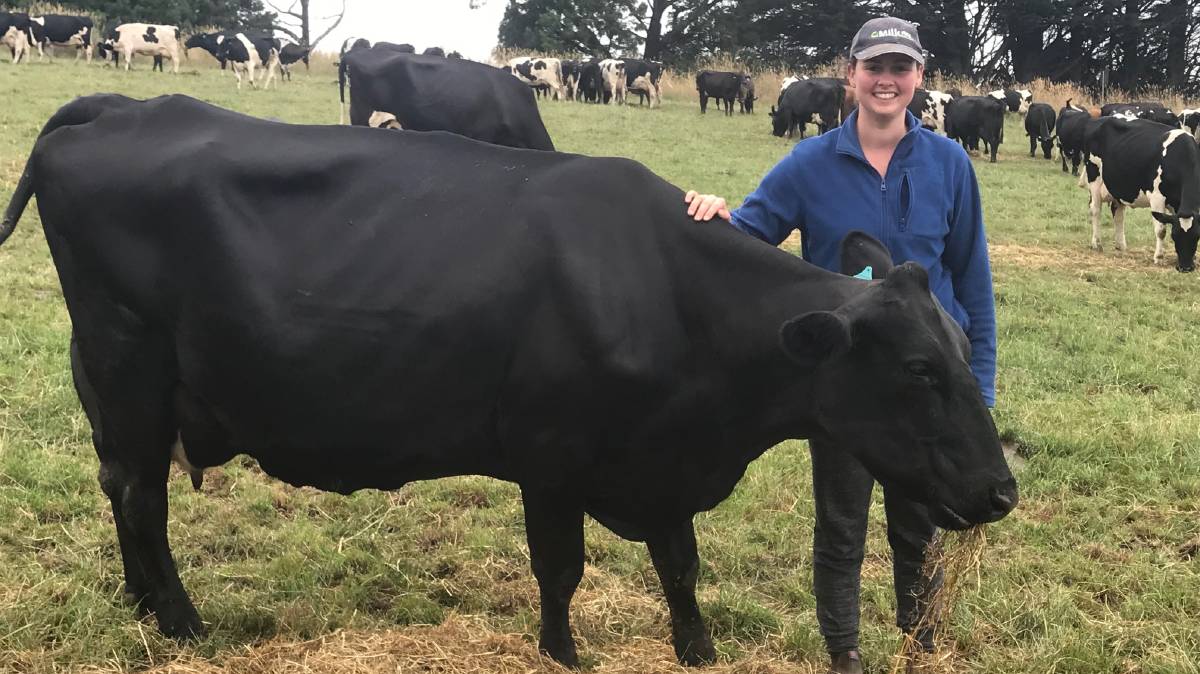 CROSSBREDS: Meaghan Douglas with an Aussie Red sired crossbred cow in her herd.

Meaghan Douglas's passion for dairying started at a young age with her family living next to a dairy farm for a short while.

Meaghan Douglas's passion for dairying started at a young age with her family living next to a dairy farm for a short while.

Six years ago, Meaghan met her partner Will Colbert which gave her the opportunity to dive right into the industry.

The herd is fed 2.4 tonnes of grain per cow and averages 593 kilograms of milk solids per year.

Their herd was sourced from cows bought from other farmers and at cattle markets.

This small portion of the herd quickly took the couple's interest, as the Aussie Reds have wonderful temperaments, consistently have low cell counts and hold their body condition well, resulting in better conception results.

They entered a group of cows into the Aussie Red On-Farm Challenge, sponsored by Viking Genetics, at the end of 2016, and they were delighted that two of their crossbred first lactation cows came first and second in their class.

Their involvement with the Reds has only increased since then, as the portion of Reds is growing in the herd, and Ms Douglas has joined the Australian Red Dairy Breed board in 2020.

"They are almost what you would call an 'invisible cow', who goes about her business without a fuss, particularly on our farm which is probably quite an intense system, but I'm quite attached to the Reds so they're definitely not invisible," Ms Douglas said.

Despite my love for the Reds, I don't actually care what colour a cow is - if she is an honest, hardworking cow with a good temperament, I'm happy. - Meaghan Douglas

The Aussie Red genetics are also used in their crossbreeding program.

"Despite my love for the Reds, I don't actually care what colour a cow is - if she is an honest, hardworking cow with a good temperament, I'm happy," Ms Douglas said.

"And with using the Reds in crossbreeding, you don't always get a red-coloured animal but you more often than not get a good animal.

"I like to put Red over a crossbred, and get that three-way cross, and then after that, the three-way cross cow will generally keep getting bred to Red."

In the August 2020 ABV release, their top Balanced Performance Index Aussie Red cow, Phoenix 1959 sired by renowned VFoske, comes out of a pretty neat line of cows they have bred.

Its dam is sired by VikCigar, and has also produced daughters by VR Hattrick and VR Viljar, and its grand-dam is an old blue cow (most likely a Shorthorn), with a large, solid frame which it has passed on to its offspring.

When selecting bulls for AI, they don't focus on just one aspect but they look at all the functional traits that they want their cows to have to be successful in their herd, such as strength and chest width, good feet and legs, and good udders.

This process includes looking at the top BPI bulls listed in the Good Bulls Guide to help choose their bull team.

She completed her PhD earlier this year, which investigated the nutritive characteristics of perennial ryegrass and using that information to formulate improved supplementary grain rations for dairy cows.

Ms Douglas is also part of the Smart Feeding project team in the Dairy Feedbase program, which aims to develop farm management systems for better allocation of on-farm feed resources.