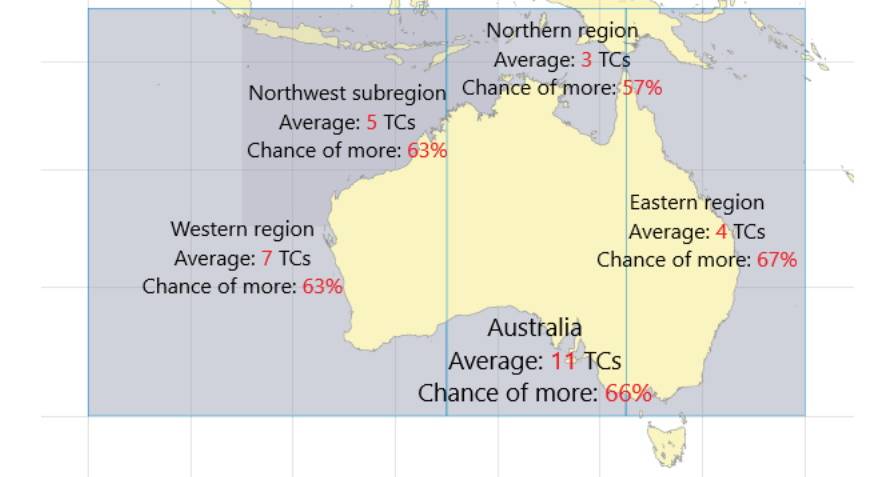 There is an average to slightly above-average number of tropical cyclones this season. Graphic - BOM

There is an average to slightly above-average number of tropical cyclones this season.

THE Bureau of Meteorology says there is an average to slightly above-average number of tropical cyclones this season.

According to BOM, there are usually about 11 cyclones in Australian waters, with around four of these crossing the coast.

Australia has always seen at least one tropical cyclone cross the coast during the November to April season since reliable records began in the 1970s.

BOM says this year's outlook is influenced by La Nia conditions in the tropical Pacific Ocean, and average to warmer-than-average ocean temperatures to the north of Australia

"In La Nina years, the first cyclone to develop across the Australian region typically occurs earlier than normal, around the middle of December," BOM says.

"During average years the first tropical cyclone to make landfall over Australia is typically in early January."

BOM says tropical cyclones that stay well out to sea can still cause damaging winds, large and dangerous waves, and storm surges along the coast.

"Tropical lows that do not intensify into cyclones, or lows that are the remnants of older cyclones, can cause widespread rainfall and dangerous flooding," BOM says.

"These impacts can extend beyond the tropics into southern areas of the country."