Simmentals are in trials between a major WA processor and growers based on pasture-fed beef.

Western Australian beef producers Mark and Caterina Bending have been strategically acquiring properties in recent years to expand the pasture potential that underpins their business success.

From a background in forestry and avocado production, the pair now run 400 Angus breeders and finish about 600 Simmental-Angus crossbred progeny from their Manjimup base, in the high rainfall area of the state's South West.

During 2020, the Bendings have been selling their first yearlings certified through the Cattle Council of Australia's Pasturefed Cattle Assurance System (PCAS).

They split their 730-hectare landholdings - located in a 30 kilometre radiusfrom the main farm - into areas for free-range grass grazing and areas for finishing, where PCAS-approved ration supplements are used on top of pasture feed.

He said the breeding herd of 400 head is predominantly made up of Angus females, which are mated to bulls from the Bonnydale Black Simmentals stud, based nearby at Bridgetown.

Joining is a relatively long period of 12-weeks, starting in June and going through to August, and the Bendings use a high ratio of one bull to about 30-40 cows.

"This means we get a spread in the time of calving, and the size of calves when it comes time to sell," Mr Bending said.

"We can then supply buyers with consistent quality lines over a longer period, because mobs of varying size and condition are separated to finish at different times."

The Bending's breeding herd is run on pasture, with extra hay and silage fed-out during autumn and early winter to help fill this typical WA seasonal feed gap.

Calving occurs from March to May and the first calves are sold at about 18-20-months-old (up to two-tooths).

"We have been using Mike Introvigne's Bonnydale Black Simmentals for about 10 years and the bulls are proven performers for us," he said.

"They are helping to boost our overall herd productivity and allow us to turn-off a highly salable product - which all feeds into higher returns.

"We find the Simmental-Angus crossbreds also have a great temperament for easy stock handling and, most importantly, perform well on pasture feed.

"These cattle get to a bigger size to generate a high yielding carcase, without running to fat - and the eating quality of the meat is excellent." 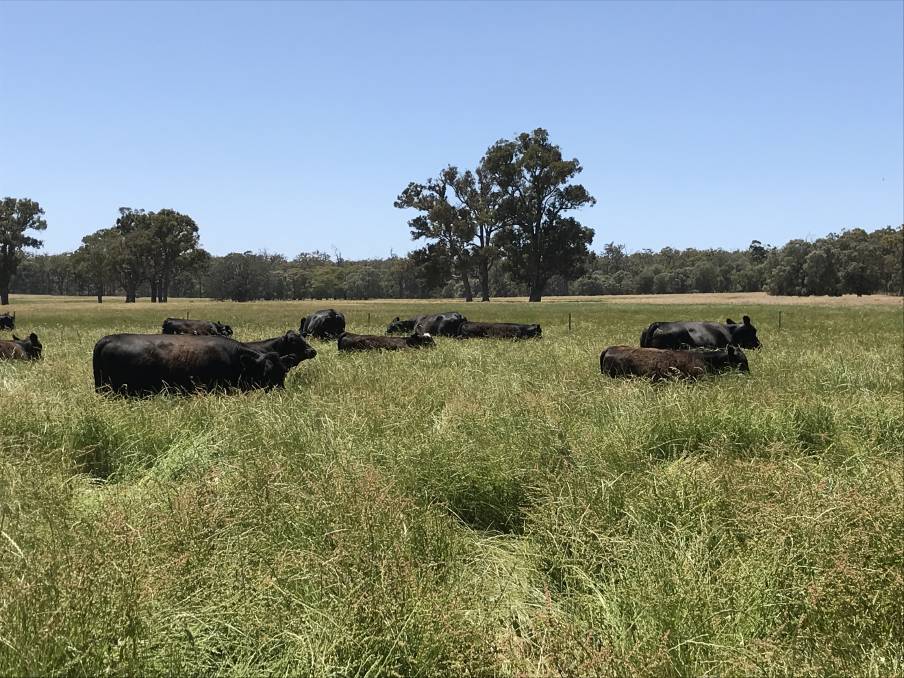 NATURAL WONDER: The Bendings are this year selling their first yearlings through the Pasturefed Cattle Assurance System.

A key sire section trait used by the Bendings is the estimated breeding value (EBV) for 600-day growth, as they want calves with good early vigour and the ability to finish at an older age than in a common sucker turn-off system.

Calves are separated into mobs at marking based on weight and condition, after which they are grazed on pasture - with some hay and silage feed.

During preparation for sale, cattle are segregated by sex and condition and moved to 'finishing' areas - mostly at the home property.

Here, they are regularly weighed and fed a supplementary feed ration accordingly. At the peak of the marketing season, weighing occurs every two weeks.

The finishing ration used by the Bendings complies with the PCAS program and is made-up of silage, PCAS mash and straw

Being relatively new to the PCAS program, the pair are continuing to refine the economics of the feed to fine-tune ration management.

Mr Bending said the aim, through PCAS, was to produce a 250 kilogram carcase as a 0-2-tooth, with Meat Standards Australia (MSA) grading for fat of 5-15 millimetres and meat colour 1-2.

He said prior to becoming PCAS accredited in the past two years, their Simmental-Angus crossbreds were already reaching 210-250kg carcase weights at 18-months-old - so the extra 30-40kg requirement at the tail end was not a major hurdle.

"Our biggest issue in the past was being able to produce consistent lines at these weights," he said.

Traditionally, the Bendings sold cattle to processors that supplied meat into Coles supermarkets.

Now they are forging new relationships with well-known WA specialist Harvey Beef, which also markets product into Coles - as well as a range of other domestic and export markets.

Returns from this type of supply chain relationship show good potential, but we need to ensure we all get our cost structures right and deliver a consistent quality product to the processor - and ultimately the consumer. - Western Australian beef producer Mark Bending

Mr Bending said, to date, the group had delivered about 2500 head of PCAS certified cattle to Harvey Beef, including about 550 head from his operation.

"Returns from this type of supply chain relationship show good potential, but we need to ensure we all get our cost structures right and deliver a consistent quality product to the processor - and ultimately the consumer," he said.

"We all need to know that animals will be available to the right specifications when required by Harvey Beef and its customers.

"For us, this creates a bit more work in grading stock back at the farm, getting the feed right and removing non-performing animals from the system early.

"Our biggest costs are feeding animals that are not going to perform, so it is vital to identify these as soon as possible and get them out of the system."

Mr Bending said his production philosophy fitted the PCAS model, in terms of providing consumers with a quality assured product that was: proven to have been sustainably fed on pasture or grass; was able to be traced; and had gone through best practice pre-slaughter handling practices to optimise animal welfare and eating quality.

He said becoming certified for PCAS required several steps for producers and covered a range of practices, such as on-farm feeding, lifetime traceability methods and animal handling systems.

Sponsored by
Do most wine lists look like they are written in a foreign language? Here are some tips about how to read one and make the right choice.
Test
Mice also have a big appetite for farm machinery and infrastructure according to a NSW Farmers' survey.
Test
It was one of the bigger spends on regional health in recent history, with measures the government says will make immediate and tangible impacts.
Test
Burra Foods has joined the opening price race, announcing on Thursday a $6.40-$6.80 a kilogram milk solids price range for 2021-22, as well as a another step up for this year.
Test
Bovaer tested in Australian conditions with promising results
Test
Inventor Darren Wolchyn admits to being guided by farmers in the development of his new tracking gear for livestock.
Test
Australians are taking action to reduce their greenhouse gas emissions by installing record numbers of rooftop solar panels.
Test
Indo feedlots, abattoirs struggle to stay profitable
Test