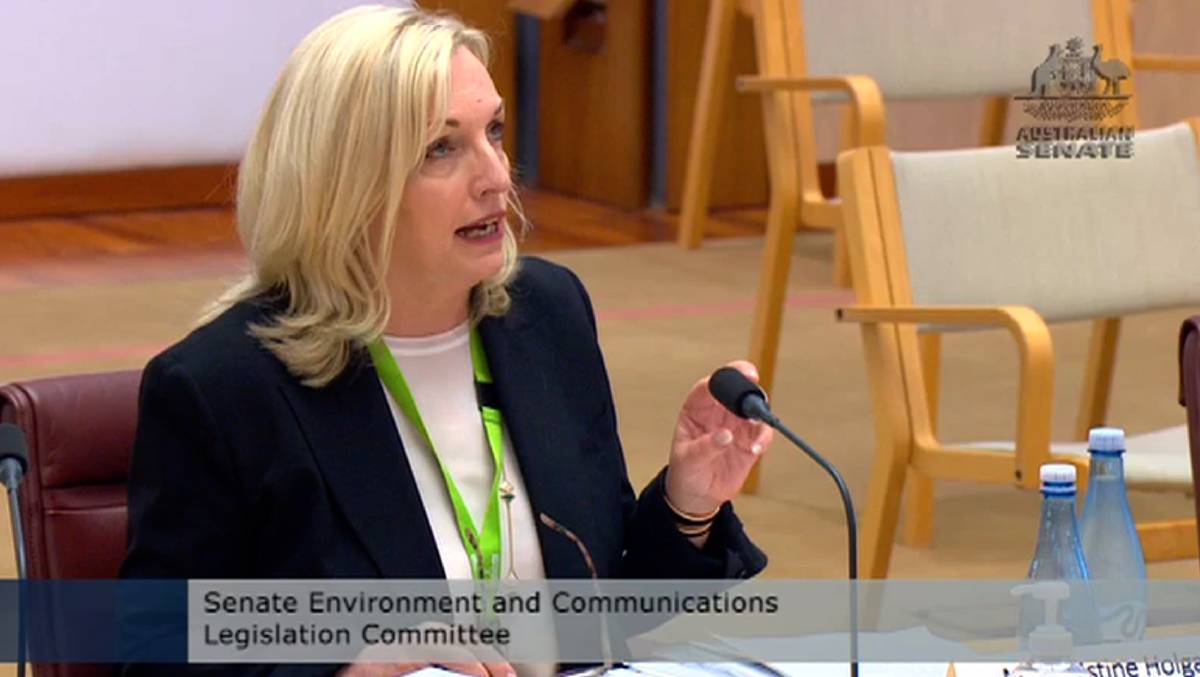 Australia Post's chief executive Christine Holgate will step aside after it was revealed her office spent $12,000 on Cartier watches for its senior executives as rewards.

Australia Post chief executive Christine Holgate will step aside after it was revealed her office spent $12,000 on Cartier watches as rewards for senior executives in 2018.

Australia Post says it will fully cooperate with an investigation into the decision to give four $3000 Cartier watches to senior staff as a reward for a deal to do banking in post offices.

Communications Minister Paul Fletcher said he was shocked and concerned about Ms Holgate's admission to a Senate estimates committee on Thursday morning and said an investigation would be undertaken.

"I have informed the chair of Australia Post that ... the respective departments carry out an investigation into this matter and I have asked the chair to provide the full support of the company for this investigation," Mr Fletcher said during question time.

"I have also asked the chair to inform the chief executive and she will be asked to stand aside during the course of this investigation."

Australia Post chief financial officer Rodney Boys will act in the role during the investigation.

Prime Minister Scott Morrison added that the investigation would look into the conduct of the board as well.

"If, Mr Speaker, there are issues to be addressed with board members, then they will be addressed then," Mr Morrison said, adding that Ms Holgate would need to step aside or leave.

"She has been instructed to stand aside, if she doesn't wish to do that, she can go!"

Ms Holgate earlier admitted four employees in senior executive roles received Cartier watches in 2018, valued at around $3000 each, for their work on an agreement between the postal service and three major banks.

"There were a small number of senior people who'd put an inordinate amount of work in and they did receive an award from the chair, myself and on behalf of the board," Ms Holgate said.

Mr Boys said he could not recall how the purchase at Melbourne's Cartier store was made but would take it on notice.

Labor senator Kimberley Kitching asked Ms Holgate if she thought the purchase that she and chair of the Australia Post board authorised was appropriate.

Ms Holgate pointed that Australia Post was technically a commercial organisation despite being answerable to government.

"We do not receive government funding. We are a commercial organisation," Ms Holgate said.

"It was a recommendation from our chair that these people get rewarded."

The Community and Public Sector Union's national deputy president Brooke Muscat slammed senior management's decisions to ignore its workers in the middle of a pandemic.

"Our members having been working harder and longer to help the community in the Pandemic, all while taking a pay freeze, and how are they rewarded? Not with a watch or a bonus I can tell you that," Ms Muscat said.

"What world do these people live in where paying themselves bonuses and gifting watches is a reward for freezing workers' pay and ignoring systemic issues within Australia Post?

"It's not enough for the Prime Minister and Minister Fletcher to be shocked, they have to act. This is what happens when you appoint your mates to the board and ignore the warning signs. Australia expects better than this."

The estimates hearing was later told that $97 million had been paid out in bonuses over the COVID-19 period.

Ms Davies said 34,500 front-line workers, including posties, received a total of $21.6 million in "thank you" payments. Each frontline worker received a one-off bonus equating to 1 per cent of their average earnings. For posties, Ms Davies said, that equated to about a $600 bonus.

Licensees and contractors were also given $5.6 million in gift cards as a thank you.

As for the rest of the remaining $60 million, Ms Davies outlined about $9.6 million was paid to the sales team and $16.5 million went to 2500 employees under the corporate incentive plan, which included nearly 700 frontline managers.

No senior executives were paid a bonus for 2020, according to Ms Davies, but 67 general managers had been paid a total of $10.1 million in bonuses for the year.

Senator Hanson-Young said, "To see an organisation that is still responsible to the public hand over that amount of money ... it just leaves a really bad taste in your mouth doesn't it?"

Earlier in the hearing, Ms Holgate denied she had been in contact with Senator Pauline Hanson over an attempted delivery of One Nation-branded stubby holders to locked-down public housing buildings in Melbourne in July.

News reports in September revealed an email correspondence between Ms Holgate's senior counsel Nick Macdonald and the Melbourne City Council showing it had threatened to involve the police if the council would not allow Australia Post to deliver One Nation's 114 packages to the tower.

"I did wonder whether somebody should [contact Senator Hanson]," Ms Holgate said.

"As the day progressed, I think we found a resolution with Melbourne City Council [and] there was no need to do anything about it further than that."

Senator Hanson had reportedly sent the stubby holders with a note that read "no hard feelings" after making offensive comments about the building's residents on national television.