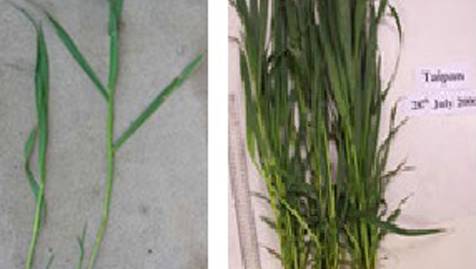 This article does not cover chemically preserved whole-crop by ammoniation or grain crops.

Specifically it discusses timing at which to cut the crops and how to determine this using dry matter (DM) or growth stage.

Forage cereals can be ensiled (fermented) either as a cut and wilted crop or direct cut and ensiled. This article will cover:

When to cut forage cereals for silage

Timing of harvest should consider the following:

Cereals can be harvested at two stages:

The flag leaf, usually a wider leaf than most to date, is the last leaf to appear before the ear or head starts to emerge.

The flag leaf sheath contains the "boot", a swelling in the sheath, from which the ear will emerge (see Figure 1).

Once the ear has emerged (see Figure 2), flowering or anthesis commences, beginning from the middle of the head and spreads upwards and downwards. 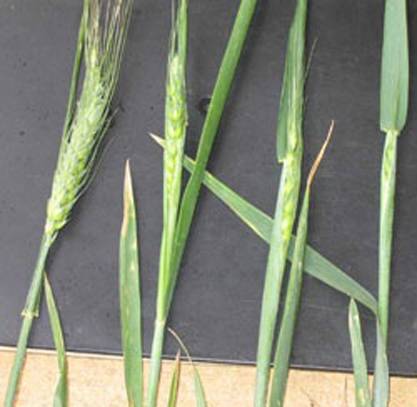 The plant has vegetative leaves up to this stage.

All cereals can be harvested before or at this stage, producing high energy silage (over 10 MJ ME) but will have lower yields compared to their potential if harvested in the grain formation stages.

If a silage of high nutritive value is required they should be harvested at the vegetative stage although they will need to be wilted to the recommended dry matter contents (see Table 1) before harvesting or baling.

Research to date indicates that although yield does increase substantially with crop maturity, there is generally a decrease in energy and protein and an increase in fibre levels.

The drop in nutritive value is greatest in oats and ryecorn compared to the other cereals (barley, wheat and triticale).

After flowering,, the grain begins to form.

As the grain develops it goes through a clear liquid phase which is prior to the commencement of starch deposition.

The grain then enters the "milky" stages, described as early, medium and late milk.

Note: It is recommended that whole-crop cereals should not be harvested for silage at the clear liquid-early milk stages.

At this stage the soluble sugars in the plant are being converted into starch in the heads.

As the plant reaches maturity, sugars in the stems and leaves are translocated to the grain and converted to starch.

These changes are associated with changes in colour from an all-green plant in the vegetative stages to an all-yellow plant in the fully mature plant at the hard grain stage.

As the grains themselves form and mature they pass through the clear liquid stage, then become milky, followed by soft and hard dough stages (see Figure 3) and finally to hard dough and eventually as a dry grain suitable for grain harvesting.

The recommended time to harvest forage cereals is at the soft dough stage.

This later harvesting results in much higher DM yields but of slightly lower energy and much lower crude protein levels than at the vegetative stage.

Plant neutral detergent fibre (NDF) levels will also be higher at this stage of cutting along with lower calcium and sodium levels.

Mixtures of cereals and legumes (peas, vetches) such as oats and maple type peas are perceived to increase the protein levels of the silage.

This may be so in some situations but seeding rate, species selection, seasonal effects, etc. greatly affect the outcome.

The time to harvest a mixed cereal/leguminous crop is usually based on the maturity of the cereal component (soft dough) and whether lodging is imminent.

However, if the legume component of the crop mixture is greater than about 40 to 50 per cent, the dry matter (DM) content of the crop at cutting may be lower than if it was a cereal crop only, necessitating the crop to be wilted before harvesting (see Table 1).

Wilting is also necessary to increase the concentration of the relatively low levels of water soluble carbohydrates in the legumes to ensure a satisfactory fermentation.

Effect of DM on silage quality

If forage cereals are harvested below the recommended DM levels (see Table 1), the material undergoes a less efficient and less desirable fermentation.

This causes some loss of nutritive value, may result in some effluent production and produces a less palatable silage, all of which will reduce animal production to varying degrees.

However, if harvested above the recommended DM levels for the various stages of growth and method of harvesting, excess air will be trapped at ensiling.

This results in higher losses of DM and nutritive value due to a prolonged aerobic phase of the fermentation process and increased microbial and yeast activity.

Large numbers of mould and yeast spores will be produced and enter a "dormant" state until the stack is reopened, or the plastic seal is holed.

Upon opening or puncturing, air enters more deeply into the poorly compacted stack compared to one well compacted.

This air results in aerobic spoilage, a result of the dormant mould spores and yeasts becoming reactivated and rapidly increase in number to consume the energy and cause protein break down of the silage.

This also leads to high losses of quality and dry matter during the feed out phase, resulting in reduced animal production.

Determining when to harvest forage cereals

Determining when to harvest whole crop silage can be very difficult and is compounded by the variation in the rate of maturing due to weather conditions and cultivar variations.

The timing of cutting is often based on one of the following:

The recommended dry matter contents at which to harvest forage cereals varies widely between experts, the majority agreeing to the range of 33 to 50pc DM (see Table 1).

The DM content in whole-crop cereals can be determined by using the microwave oven technique for estimating DM levels and/or using the stage of growth as a guide.

A representative sample from a range of windrows or standing crop is required.

Whole plants are collected and then chopped into lengths of 40 to 70mm and thoroughly mixed before sub-sampling for microwave oven drying.

Thorough mixing and subsampling is critical to obtain a true representative sample due to the variation in DM contents in the leaves, stems and heads, particularly in the grain formation stages.

In these latter stages the grains will be at varying stages of maturity, affecting grain:stem ratios and will impact on the DM content and quality parameters of the final product.

The dry weight is obtained by drying the sample in a microwave oven.

The DM content (percentage) is then calculated by dividing the final dry weight by the initial wet weight and multiplying by 100.

Be aware that after an initial period of drying, a glass of water, 75pc full, needs to be added to the oven after each weight check to prevent spontaneous combustion (fire) and to minimise the odour.

As forage cereals mature, the physiological state of the plant changes, along with an increase in DM content of the plant.

Depending on the final use of the silage, cereal crops can be cut at two stages of growth.

The plants will be vegetative up to this stage with the stems still very succulent and of high nutritive value (see Figures 1 and 2).

The DM content will usually be well below 30 per cent DM, thus requiring wilting to the recommended contents before harvesting (see Table 1).

The grain enters the "dough" stage when no milky liquid remains (see Figure 3). 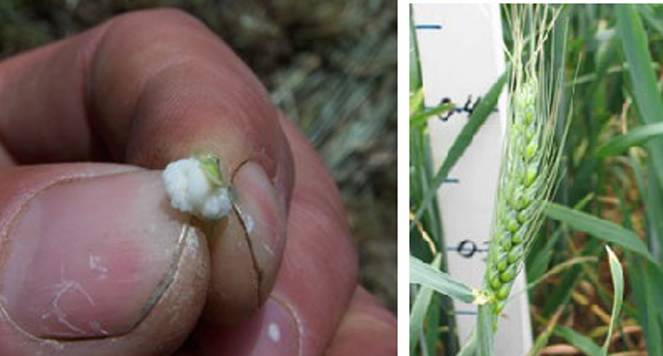 The dough stages are described as early (milky dough), soft (cheesy dough, similar to brie cheese) or hard dough, just before the grain is harvest ripe.

The grains may reach the hard dough stage within days after soft dough if the weather is hot and dry, or several weeks in cool moist conditions.

There are differences between species also.

The ideal harvest window for barley may be as short as three to four days and for wheat, triticale and oats, seven to 10 days.

The DM content should be slightly higher for baling than for forage harvested WCS to ensure a favourable (lactic acid) fermentation (see Table 1). 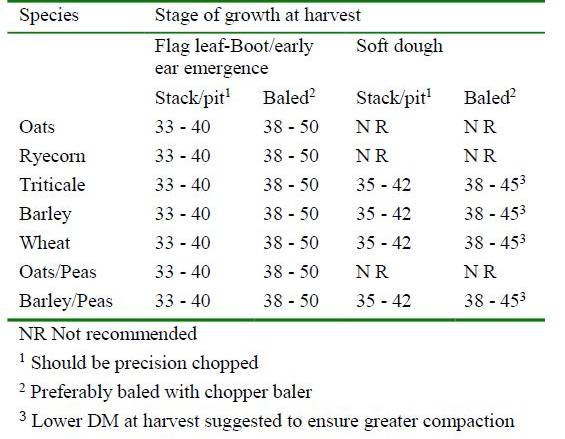 Table 1: Target DM content and stage of growth for at harvest for ensiling forage cereals.

Note: Due to the amount of stem compared to leaf of forage cereals at harvest, the hand squeeze technique, as used for pastures, is not an accurate method for estimating DM content, particularly after the flag leaf/boot stage.

Note: Hay moisture meters are inaccurate for determining the moisture content of forages under 60 to 70pc DM (over 30 to 40pc moisture) so are not useful for determining silage DM contents.

Practical implications of time of harvest

There are several management implications to consider when deciding on the timing of cut for forage cereals.

Two of these are:

Whether wilting is possible

Forage cereals in the vegetative-boot stages of growth have high buffering capacities, ie. they are "reluctant" to produce desirable levels of lactic acid for a successful silage fermentation.

This problem can be overcome by wilting the mown crop to over 33pc DM.

However, this is difficult when cutting very heavy cereal crops, especially since autumn/winter sown crops will be reaching these stages in late September/early October.

Also in early-mid spring, in the dairying areas of south eastern Australia, the weather is rarely hot, often being warm only, often cloudy, and sometimes even foggy.

This leads to reduced rates of wilting and some loss in nutritive value if harvesting does not occur within one to two days.

The use of tyned typed mower conditioners will be an advantage to increase the wilting rate and even better if the windrows are left as wide as possible.

However, watch for the loss of grain heads if conditioning is set too aggressively.

Tedders can be utilised to spread the crop immediately after mowing but set the tynes to avoid "picking up" soil while operating.

Unfortunately, in heavy crops, both types of equipment will have difficulty in operating to full effect.

Implications on other farming activities

An over-riding but often forgotten factor influencing when to harvest is the implications of harvest time on other farming activities.

This is mainly related to the weather implications for follow up crops or pastures such as the ability to prepare paddocks for sowing and weed control if taken off early.

This is not such a problem in sandy loams type soils but may be in clay loams which are more common in most dairying areas.

Harvesting later in the soft dough stage may result in a lack of soil moisture or miss out on follow up rains for the follow up crops.

Spring sown forage cereals, if rains are likely in December/early January, may be a possibility in some dairying areas.