This sale suggests land values have almost doubled in a year

EXPECTED to be the highest value farm auction for the 2020 spring/summer selling season in Western Australia, Maybenup sold for a record price under the hammer last week.

Vendors Jim and Pam McGregor were ecstatic with the sale result, which saw Elders Real Estate auctioneer Don Fry announce the property was sold for $10.7 million.

With the property measuring 1479.15 hectares, the sale price equates to about $7234 per hectare.

It tops a recent Kojonup auction, held by Nutrien Harcourts WA, which sold for $4.4m or $6085/ha, which was claimed to be a record price at the time.

A massive crowd of about 140 people turned up to watch the action and support the vendors at Kojonup's Glenlossie function venue, with six parties registering and four bidders on the day.

In an increasingly competitive real estate market, with corporate and investor influence on the rise, this sale reflected how farming families are becoming more sophisticated to compete with high net worth buyers.

Mr Bilney said his farm neighboured Maybenup and Mr Broom and the Radfords were also nearby, which he said was the major drawcard for him purchasing the property.

"We have purchased the property as a syndicate and have already divided it up among us," Mr Bilney said.

Mr Bilney farms with his wife and two sons and said this purchase was part of a potential future plan.

"It has been a plan of ours to buy land in the area to add to the business and put us in a better position for succession," Mr Bilney said.

Both Mr Bilney and Mr Broom are majority cropping farmers, with the Radfords having more of an even balance between grain and livestock production.

However the syndicate had to remain strong in the fiscal bidding to secure the in-demand property.

Mr Fry commenced the auction with an opening bid of $7m and steadily increased in $100,000 increments, with a surprise $500,000 jump in the middle which sped the process up and showed the crowd who was serious.

When bids reached $10.7m, Mr Fry paused the auction to talk with the vendors and returned to declare the property officially on the market.

Although Mr Fry's calls for bids ramped up the enthusiasm, it proved he had already done the hard yards as there were no more bids to take and he announced the property sold.

Although he said it can be difficult to value a grazing property based on fence to fence hectares, rather than a broadacre property per arable hectare, "I would cautiously say it is a record price for the area".

"This gives the local market a benchmark," Mr Corker said.

"People who have been thinking about selling might be more encouraged to sell given the strong prices for farmland at the moment.

"The market strength has mostly been driven by low interest rates and strong commodity prices." 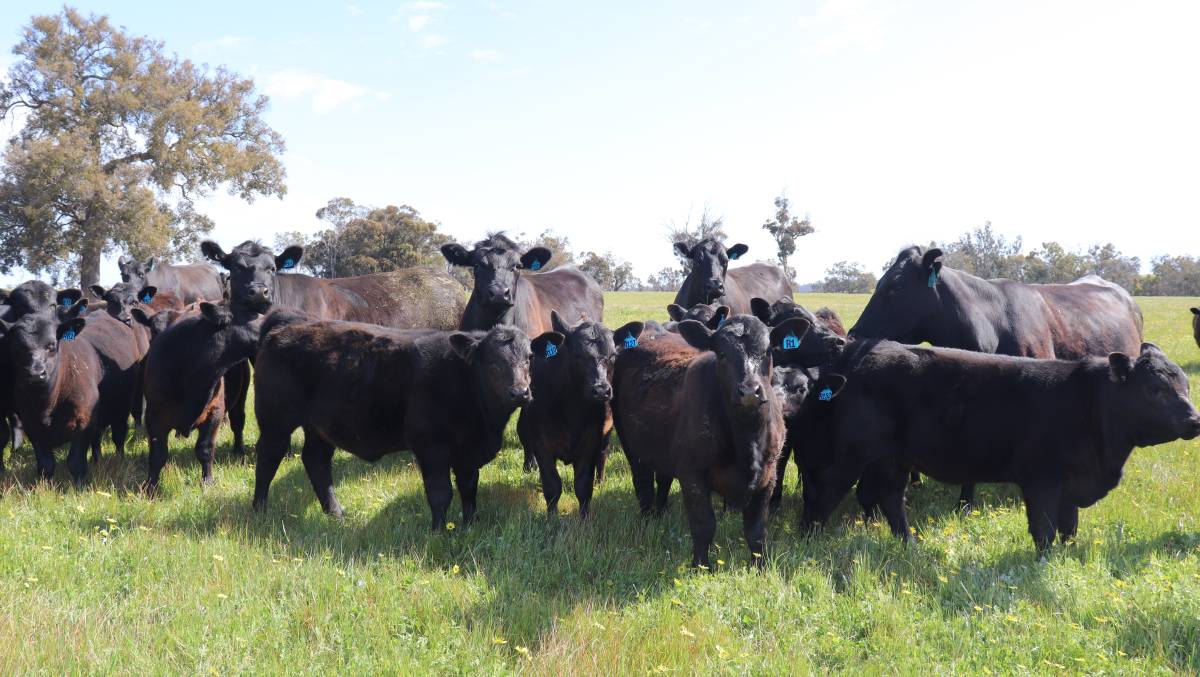 Maybenup was a premium grazing property and home to the Ardcairnie Angus stud.

With the market having been strong for at least the past four years, Mr Corker said generally farmers were better off to purchase land than lease it.

"While leasing is an attractive option, you can buy a farm and the purchase price plus interest will usually be less than the cost of leasing, but the only problem is there is a short supply of listings," Mr Corker said.

Mr Corker has been selling rural real estate for 30 years and the last time he recalled the market being so strong was in the late 1990s/early 2000s, when the blue gum industry was booming.

"Land prices have been rapidly increasing in the past five years," he said.

It was a busy marketing period for Mr Corker which included 28 viewings of Maybenup.

He said the interested parties were mostly family farmers, including neighbours and growers from the region and other areas, as well as out of the State.

There was also some investor interest but no corporate enquiries.

It's common for smaller scale farms to fetch higher prices per hectare, but Maybenup - a medium to larger sized farm - had beaten those odds.

"Maybenup has been farmed quite differently to others - the McGregors have used holistic practices for 100 per cent grazing, so it was really a unique farm for the area," Mr Corker said.

With both having farming backgrounds, the couple had always been passionate about raising and breeding cattle and emigrated from Scotland in 1973 with their two young children.

Mr and Mrs McGregor purchased Maybenup in 1998 with the vision of expanding their cattle operation, including their stud, Ardcairnie Angus, which was also offered for sale.

Their passion is just as strong for raising well-tempered and good quality cattle as it is for looking after the land on which they farm.

This passion was exhibited in holistic management, which centred around planned grazing and has seen them use no chemicals to establish soil that is rich in micro-organisms.

"When we looked at Maybenup we knew that you only get one chance to buy a farm like that," Mr McGregor said.

"It has been a great place to live.

"We are very happy to see that it has gone to local buyers and we have known them for a while and respect them."

While it's common for most people to attend a property auction 'just to have a look' and see the latest town gossip first hand, it was clear by the dozens of people that stayed sometime after the auction to wish the vendors and sellers well, just how supportive the community is.

And the McGregors spoke very fondly of the sense of community closeness.

"It has been wonderful to live in such a great community, which has been very kind to us since we moved here," Mr McGregor said.

"Elders have been great with this whole process as well - handling the sale of the property and stud very well."

Elders Real Estate senior real estate executive - rural, Simon Cheetham said the sale of Maybenup was a reflection of the strength of the market.

"Maybenup was in a prime location and had been really well cared for under regenerative grazing principles - it attracted the interest and achieved the price it deserved," Mr Cheetham said.

At this stage, Mr Cheetham said this result looked to be Elders' best auction result for the 2020 selling season.

"There is potential for more auctions following harvest in the new year," he said.

"Expression of interest has definitely been a more common selling method than auction in recent years, however auctions are proving to be very effective for the right property in the current market."

With a new price record set from this sale, farmers might be concerned about being priced out of the market, particularly when the Kojonup per hectare price has almost doubled in a year, based on a comparison of this sale and Rural Bank's annual Australian Farmland Values report, which reported average property prices in the area to be $3734/ha in 2019 and $2950/ha in 2018. The property sold for $10.7 million to a syndicate of three farming families from Kojonup. Photo: Elders Real Estate.

Mr Cheetham said this sale was an example of how farming families could compete in a tight market by pulling their capital together.

"In the end it was three farmers who ended up being successful," he said.

"And although some farmers may feel priced out of the market, the higher prices being achieved should increase their own equity and possibly assist them to diversify, get into a more intensive production system or purchase land in another area."

Both Mr Corker and Mr Cheetham anticipate the strong market conditions to continue for some time yet.

"Talking to counterparts in other States and contacts overseas, WA farmland does not appear overvalued on a comparative basis nationally or internationally," Mr Cheetham said.

"We may not see as sharp an increase as we have just experienced in the past 18 months, however farmland remains a very attractive investment in the current economic climate."