Ken Wilcock notes that China appears to be well on the road to recovery from the effects of COVID and ASF.

Considering the impact of African swine fever on the animal population and COVID-19 in the human environment, he thought the former has had a greater effect in the interplay between supply and demand for protein because of the sheer cutback in China's pork supply.

Decimation of China's pork production base has led to massive imports of pork and other animal protein but now it seems there is some nervousness in the trade as domestic pork supplies in China are starting to come back.

Analysts for some time have been trying to figure out just when China would stage this recovery but for Haggard, the evidence of China's live hog market dropping in price is clear indication that the pig population has now turned the corner and returned to upward trend.

Referring to those domestic prices, he said: "They are still extraordinarily high but they are coming down."

But he is still forecasting very high pork imports into next year.

He believes this year will set the record for imports and the inevitable decline will probably start to show in next year's figures.

As a companion protein, beef has also undergone a meteoric rise in import demand and for the grain-fed product that the US has to offer, Haggard seems pleased with progress.

Weekly sales over the past couple of months have been a steady upward line on the graph.

He notes that the expanded access the US won in the January phase-one trade deal is paying off but he also attributes some of the success being achieved to the fact that Australia, as their major competitor in grain-fed beef, is at the bottom of its cattle cycle and its tighter supply position will take time to rebuild.

He said when China's official media gets upset at something the US has said or done, they see Chinese consumers getting a bit sensitive and reacting to US product in their local supermarkets.

But the past month or so has been pretty good.

One thing Haggard's team keeps a close eye on is the way product clears inspection at port. Product inspections for US beef and pork have been remarkably smooth despite concern on the Chinese side about COVID being carried into China on imported frozen meat and seafood.

So far, he said, it has been remarkably stable.

But while the supply side is showing signs of a return to more normal times, so too is the whole downstream side of the business.

Haggard has particularly noticed the lifting of social distancing requirements. Large gatherings are now allowed and trade exhibitions and conventions are restarting.

While borders are still sealed, meaning access was limited to residents, there were nevertheless tens of thousands of visitors mostly not wearing masks. At a USMEF-hosted barbecue, there was no social distancing evident among the 350 guests.

Haggard observed that this loosening of COVID restrictions has been going on for about a month now suggesting a return to a more normal existence is under way in China.

Drought tightens grip in US 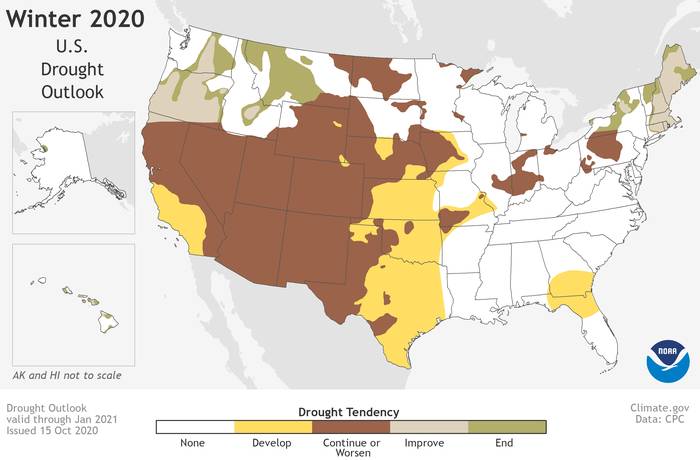 FORECAST: The US is once again experiencing widespread drought and the National Oceanic and Atmospheric Administration thinks it is likely to worsen with the onset of winter. Image: Courtesy of NOAA.

FROM 2011 to 2013 the US was a net exporter of beef, a surprising fact considering the huge volume of beef the country imports.

Those three years represent by far the lowest levels of beef imported into the US in the past 15 years.

They also coincide with the last major La Nina-induced drought in the US, which triggered massive herd liquidation.

The logic is simple; the extra beef produced by the sell-down of cows meant less was required in imports from traditional major suppliers such as Australia and New Zealand.

At the same time fed-beef production remained relatively high until the flow through effect of the diminishing herd started to show up in fewer cattle to go on feed.

When herd rebuilding resumed in 2014, supply of cows tightened and lean beef was once again in high demand. For the next two years imports continued to overshadow exports as the herd gradually rebuilt.

The reason this is significant is that the US is once again experiencing widespread drought and the National Oceanic and Atmospheric Administration thinks it is likely to worsen with the onset of winter.

As can be seen from the map more than 45 per cent of continental US is affected, making it the most widespread drought since 2013.

The US imported lean beef trade is already lacklustre but a return to herd liquidation could mean considerable further downside to come.

WAGGA on Monday showed there are a few cattle in the south ready to come forward in keeping with the traditional start to the seasonal run at this time of year.

Numbers jumped to 2500 head with some well-finished trade steers and heifers, heavy steers and bullocks and a good run of heavyweight cows.

The steers and bullocks were 2-4c easier but still registered a healthy 380-382c average with sales to 401c.

Heavy cows were also 2c off last week but still reached 345c for a 314c average.

In Queensland and no doubt elsewhere, filling kills remains a week-by-week challenge.

There was little or no change to eastern states grids with southern and central Qld on 650-670c for 4-tooth ox and 600c for heavy cow.

Published grids at Wagga and Naracoorte remain at 635c and 580c for similar descriptions.

Indicator Aust/NZ 90CL blended cow in the US was US$1/cwt dearer according to Steiner on the back of increased interest for delivery in early 2021.

Australian exports to the US for October are expected to be the lowest for the year thus far at a little over 14,000 tonnes.