Beef consumption set to hold, and maybe even increase

NEW home cooking habits formed from pandemic living might well be the catalyst to hold domestic consumption of beef at current levels or even reverse the longer-term decline, industry leaders are hoping.

While total consumption in 2020 looks likely to drop slightly in line with reduced production, Meat & Livestock Australia's projections have it lifting again by four per cent come 2023.

That means beef consumption would hold steady, around the 22 kilograms per person per year mark.

Industry leaders said there had already been signs of a plateauing of the longer-term consumption decline prior to the upheaval of COVID-19, which has made trends almost impossible to pin down.

Since 2000, beef consumption has dropped 41 per cent from 37.5kg per person, while chicken has lifted 50pc to 46.9kg, Thomas Elder Markets reports. 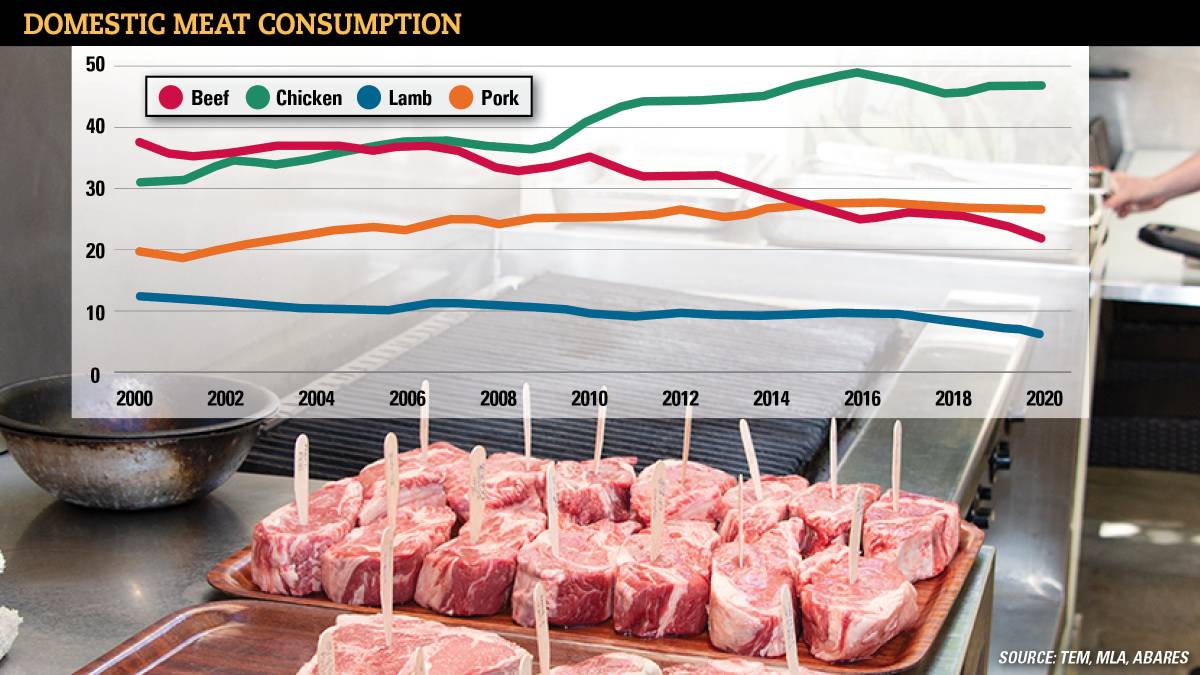 The reduction in consumption has largely come from people reducing portion sizes, according to Pollinate.

And they are paying the same for the smaller portions.

Australian Bureau of Statistics data shows retail beef prices have been on the rise since 2014 and last year the average hit a record of $20.64/kg.

Between 25 and 35pc of Australia's beef production is consumed domestically and the decline in red meat consumption here is in line with all other Western societies.

The fact retail value has held up, and the large number of emerging overseas market opportunities, says more about Australian beef's ability to position itself successfully as a premium product - and that's exactly where it wants to be, Mr Mackay believes.

Further, he believes the experience of COVID-19 has proven 'a great signal to our industry that red meat is part of the psyche of Australians.'

In a beef industry career spanning almost 50 years, Mr Mackay said he had never before seen anything like this year's situation of beef and lamb flying off supermarket shelves.

Indeed, many beef marketers are talking about the possibility the changes which have seen people who once lived on takeaway now making casseroles becoming permanently embedded.

While the food service sector, which typically sources around 28pc of Australia's domestic beef supply, has been hard hit by lockdowns, retail sales look to have more than picked up the slack.

MLA's domestic marketing manager Graeme Yardy said overall, the ups and downs delivered by COVID-19 appear to be balancing out.

"The fresh meat retail category has been very strong - more people are eating at home and there appears to be more experimenting with red meat cuts and the working of new recipes into the home cooking repertoire," he said.

"The big winner over the past six months has been the independent butcher channel, which is growing much faster than the rest of the market at around 30 per cent up on last year.

"Beef sales through quick service restaurants has also been very strong but the rest of food service is still struggling, particularly at the higher end."

TEM analyst Matt Dalgleish points out the increased consumption of beef from home would likely see volumes grow, but the overall domestic spend would not likely be as high.

"Potentially COVID-19 has been enough to change people's behaviour permanently, although there is nothing to show that to be fact just yet and it could be short-lived," he said.

The company runs an annual study, commissioned by MLA, aimed at understanding what the Australian public thinks of livestock production, farmers and how beef and lamb stacks up against other protein options.

Key findings are that most people see farmers as very trustworthy - on the same side of the ledger as medical professionals, police and teachers.

Chief executive officer Howard Parry-Husbands, speaking on a recent MLA podcast, said there had also been an improvement in positive perceptions more recently around things like sustainability and ethical issues.

"But we are also finding a lot of ignorance. About half of those we speak to say they have little understanding of the industry's environmental impact, welfare or ethical issues," he said.

That creates big opportunity for increased education and Mr Parry-Husbands said it was becoming increasingly evident that the retail point - the supermarket or the butcher shop - is a good place to talk to the consumer about sustainability or other things they might be concerned about.

Meanwhile, the increase in consumers reducing their portion size of red meat was linked to health perceptions and aligned with veganism and vegetarianism, he said.

However, there was an interesting quirk.

"Consistent in the data is about 7pc of Australians identifying as vegetarians but when you ask them what they actually eat, 30pc eat meat of some description," Mr Parry-Husbands said.

"These are people who say 'yes I'm vegetarian but I sometimes eat meat'."