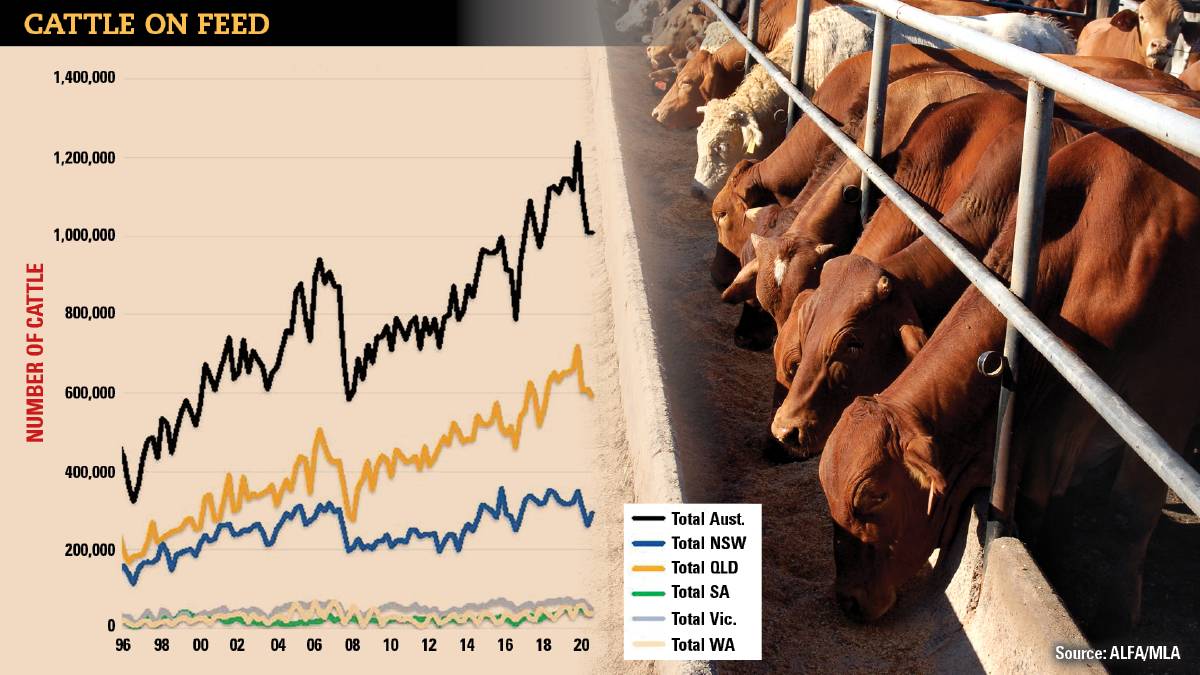 Reports lot feeders are shifting weights down to increase access to cattle.

The September quarter industry figures have numbers at 1,010,320 head, up 128 head, driven by a 12 per cent lift in NSW and a slight lift in Western Australia. Numbers on feed declined in all other states - in Queensland to the tune of 20,000 odd head.

The overall result has given rise to the hope we may have seen the worst of the lot feeding decline expected on the back of the great 2020 cattle shortage and there may even be some growth in the first quarter of next year.

The big grain harvest, and the possibility now of a larger component being designated towards feed, bodes well for the lot feeding sector.

There are also reports some feedlot managers are shifting weights down - expanding their ideal feeder weight with a view to putting stock on feed longer given cheaper feed, which opens up larger volumes of cattle to them.

There is obviously a point at which the cost of feeder cattle becomes too high but it doesn't seem that point has been reached yet, given how aggressive feeder buyers remain in the market.

Meat & Livestock Australia analysts said it was the competition between restockers and feeder buyers that was pressuring the store market at the moment.

They reported the eastern states paddock feeder steer and heifer indicator reached record highs this month. The steer indicator is travelling 106c above the five-year average at 318 cents a kilogram liveweight while heifers have lifted 92c above that average.

It was this story that fueled the expectation that the last two quarters of this year would see ongoing declines of numbers on feed but the 100-day and 70-day fed cattle prices have also remained at record highs.

At the same time, wheat ex-Darling Downs eased 21pc to average $338/tonne and barley averaged $298/t, a decline of 18pc on the previous quarter.

"We knew when seasonal conditions changed across the Eastern Seaboard we'd see higher prices and that would impact the dynamics of lot feeding and we did get declines in the previous two quarters," he said.

"The current margins are tough for feedlot operators but the number of cattle on feed speaks to the continued confidence people have in the solid demand from export markets and the reliance Australian supply chains have on the grainfed sector to provide a consistent, high quality product."

Some feedlot operators said they increased their own backgrounding capabilities and acquired younger and lighter cattle early to offset the expected dwindling supply - and that was now contributing to their ability to hold their numbers on feed.

Feedlot utilisation has remained steady at 70pc, a particularly strong result given national capacity has grown to a new record of 1.449 head, up from 1.365 in September last year.